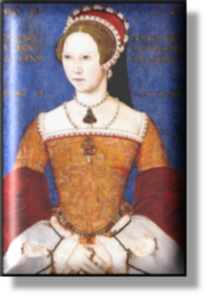 xxxxMary Tudor was born at Greenwich in 1516, the daughter of Catherine of Aragon. Following her mother's divorce she was harshly treated by her father's new wife Anne Boleyn. She was forbidden to see her parents - she never saw her mother again -, stripped of her title, and obliged to act as a lady-in-waiting to the young Elizabeth. After Anne Boleyn's fall from favour, however, Mary was allowed to return to Court in 1544, and, having acknowledged Henry VIII as head of the English church, was granted succession to the throne after her half-brother Edward. Although still a devout Roman Catholic at heart, she thus survived the six years of Edward's reign and, upon his untimely death in 1553, was in a position to restore publicly the faith she had retained in private.

xxxxxAs we have seen, upon the death of Edward in 1553 (E6), Mary was regarded as the rightful heir to the throne, and she had no real difficulty in toppling Lady Jane Grey from the seat of power within a matter of days. But her popularity was to be short-lived. Once crowned as Queen - the first one to rule England in her own right - she immediately set about reversing the Protestant reforms introduced by her father and half-brother. Papal supremacy and the Mass were restored, and she instigated a religious purge that was to earn her the title of "Bloody Mary", besides a great deal of enmity. Some 280 "heretics" were burnt at the stake, including such leading Protestant churchmen as Cranmer, Ridley and Latimer, many in the "Smithfield fires" in London. 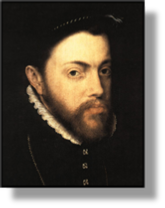 xxxxxNor was her foreign policy any more successful. In July 1554 her marriage to the Catholic Prince Philip (illustrated), heir to the Spanish throne, proved immensely unpopular, and led directly to a serious rebellion under the leadership of Sir Thomas Wyatt. And it also led to a humiliating defeat on the battlefield. In the final year of her reign Mary was obliged to support her husband in a war against the French. In the conflict that followed, England lost its only remaining possession on the continent, the valuable port of Calais.

xxxxxThus it was that Mary's five-year reign was little short of a disaster. The fears over her unpopular marriage, the defeat at the hands of the French, and the persecution of many Protestant "heretics", including leading churchmen, caused widespread discontent and, at times, open rebellion. Against this background, her death in November 1558 without a direct heir came as a great relief. She died of a fever and, it must be said, there were many in the land who were pleased at her passing. Indeed, we are told that the announcement of her death and the accession of her half-sister, Elizabeth, were greeted by the ringing of bells and the lighting of bonfires.