xxxxxAs we have seen, it was Babur, the grandson of Tamerlane, who emerged as the next Mongol leader. He established a kingdom in Afghanistan and then, gaining entrance to India, won the Battle of Panipat in 1526, thus becoming the first of the Great Mughals of India. His grandson Akbar came to the throne in 1556 (M1), and also proved a great leader. By 1576 he had captured the Punjab, seized Kabul, and overrun the rich province of Bengal. He then went on to conquer Kashmir and much of northern Deccan. In addition to his military prowess, he was an outstanding administrator and, for the most part, kept his vast empire under control. Although a Muslim, he showed tolerance towards the Hindus, and his court became a great cultural centre. His son, Jahangir, succeeded him. His early years were peaceful enough, but he later lost his grip on power. He was succeeded in 1627 by his third son, Shah Jahan, the emperor remembered above all for his building of the magnificent Taj Mahal, begun in 1632 (C1).

xxxxxFollowing the death of the great Turkoman Mongol leader Tamerlane in 1405, it was his grandson, Babur, who emerged as the next leader of distinction. As we have seen, he established a kingdom in Afghanistan, and in 1525 eventually managed to gain a foothold in India. Having broken into the Punjab, he moved his forces south-east and defeated the Sultan of Delhi at the Battle of Panipat in 1526. Within a few days, he had captured Delhi and Agra and become the first in a long line of Indian emperors known as the Great Mughals. 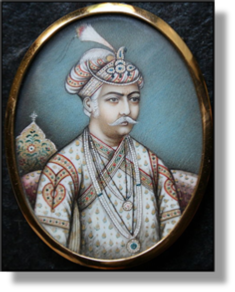 xxxxxThe new dynasty got off to a shaky start, but Babur’s grandson Akbar (illustrated) came to the throne in 1556 (M1) and in 1560, at the age of seventeen, took over the reins of government and proved to be the greatest of the Mughal emperors. An outstanding military leader, his early campaigns included the capture of the Punjab and the taking of Kabul. By 1576 he had conquered Gujarat, valuable for its ports on the Arabian Sea, and had overrun most of the rich province of Bengal. He conquered Kashmir after a six year campaign, completing his conquest in 1592, and he then went on to take Sind and Kandahar. In his final campaign, starting in 1598, he moved into the Deccan and by 1601 had brought Khandesh, Berar and part of Ahmadnagar under his control.

xxxxxAnd his prowess on the battlefield was more than matched by his success as an administrator. He totally reformed the tax system, introducing a fairer method of assessment, and, in those areas completely under his control - as opposed to fiefdoms - he centralised political control in order to avoid the local abuse of power. All army officers owed allegiance directly to him, as did senior government officials, and he posted a finance minister - known as a diwan - to all regional governments to supervise the speedy collection and return of taxes. A Muslim himself, he nevertheless showed remarkable tolerance towards the Hindus. He gained their allegiance by marrying a Hindu princess, and by appointing Hindus to the highest military and civil positions within the state. Such conciliatory measures created a peaceful climate in which trade flourished alongside economic and urban development. 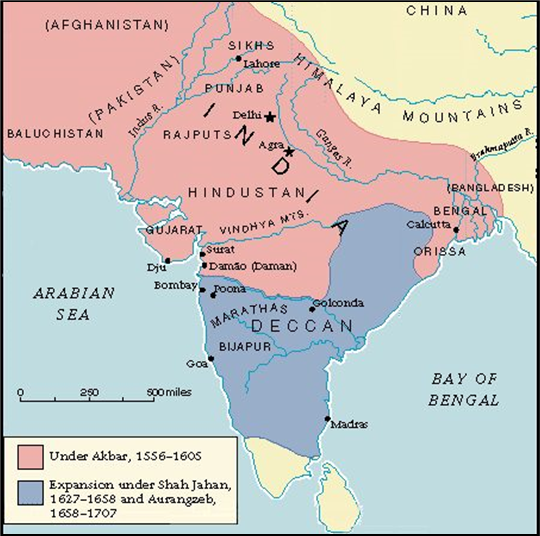 xxxxxAlthough he was capable of cruel acts of revenge on the battlefield - notably the massacre of the inhabitants of Chitor in 1568 - he was a moderate ruler by the standards of the day. Indeed, his tolerance and wisdom, together with his patronage of the arts, earned him the title "Guardian of Mankind". His court became a great cultural centre, full of artists, writers, scholars, poets and musicians. Akbar himself was responsible for the building of the Great Fort at Agra, and for the founding of Fatehpur Sikri, his capital city as from 1569. Situated some 25 miles west of Agra, the buildings are an interesting mixture of Hindu and Muslim styles. Notable here is the Great Mosque with its colossal "Victory Gate" in red sandstone. The city is now maintained as a site of historic interest.

xxxxxWhen Akbar died in 1605 the population of his empire was some eighty million, and his domains spread from Afghanistan to the Bay of Bengal, and from the Himalayas to the northern Deccan. Over so vast a territory, his rule was clearly nominal in places, often confined to the open plains and major centres, and dependent upon the continued allegiance of many feudal rulers, but that he kept such a huge empire together at all is a testimony to the quality of his statesmanship and to his remarkable skill as an administrator. Indeed, the way in which he organised and controlled his diverse lands, rather than his conquest of them, must be seen as his supreme achievement.

xxxxxAkbar was followed by his son Jahangir. The first years of his reign were peaceful and prosperous enough, but his final years were beset by the intrigues of his domineering wife and the rebellion of his third son - who eventually succeeded him as Shah Jahan in 1628. As we shall see, he is remembered, above all, for his building of the magnificent Taj Mahal, begun in 1632 (C1). 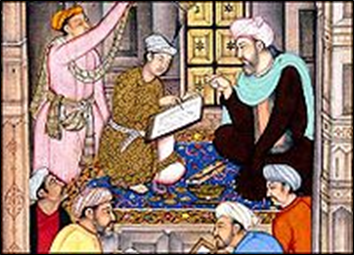 xxxxxIncidentally, the court of Akbar became famous for its brilliant artists, particularly in the painting of miniatures. Akbar's father, Humayun had "imported" Persian painters, and these were used to train Hindu artists. Among the many works produced in this form was the Akbarnama (The Deeds of Akbar), painted around 1595. Depicting the exploits of the great Emperor and noted for the jewel-like quality of its illustrations, it can now to be seen in the Victoria and Albert Museum in London. Here illustrated is The Court of Akbar.

xxxxxAmong the artists who contributed to this work were Basawan, one of the finest Mogul painters, and Mansur, who later worked at the court of Jahangir, specialising in the painting of animals. These miniatures - depicting, among other subjects, portraits, birds, animals and flowers - reached the height of perfection during the reigns of Akbar's son and grandson.