xxxxxLuís de Camoens, one of Portugal’s greatest poets, led an eventful life as a soldier, much of it fighting in North Africa and the Far East. It was while in the Orient that he wrote his country’s national epic Os Lusíadas (The Lusiads), centred around Vasco da Gama’s historical voyage to India, but containing heroic deeds of other Portuguese adventurers. This work, published in 1572, did much to maintain the national spirit of his people, but it made him little money, and he died in poverty and obscurity. He wrote a large number of odes, elegies and sonnets. Many had a romantic theme, but some were the product of anguish and genuine suffering, and it is in these that his verse excels. 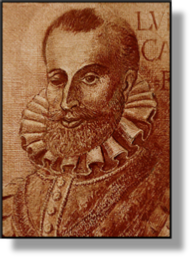 xxxxxOs Lusíadas (The Lusiads), a long narrative poem which tells of the voyages of his fellow countryman Vasco da Gama and other Portuguese heroic events  - all weaved about with ancient mythology - was written by the soldier and poet Luís de Camoens in 1572. It was at once hailed as the country's national epic.

xxxxxCamoens, one of the greatest of Portuguese poets, lived an eventful life. He was probably born in Lisbon, and it is known that he worked as a tutor at the court of John III. It was there that his adventures began. His affair with one of the queen's ladies-in-waiting shocked the court, and in 1546 he was exiled. He now chose a military career. He took part in a number of expeditions, and in the course of the next twenty years, was shipwrecked, lost an eye while fighting against the Moors in North Africa, was imprisoned on numerous occasions, and then, after being arrested and then pardoned for his part in a street brawl, travelled extensively in the Far East. Here, fighting and writing, he eventually returned home via Mozambique. It was during his stay in the Orient that he wrote The Lusiads, centred as it is around Vasco da Gama's discovery of the sea route to India. 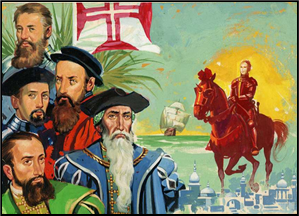 xxxxxHe arrived home in 1570, broken in health and with little more in his pocket than the manuscript of The Lusiads. It was published two years later, bringing him fame but not much of a fortune - just a small pension from King Sebastian. In 1578 his patron was killed in Morocco during a crusade against the Muslims, and he wrote a moving sonnet to mourn his loss. As is so often the case with these talented adventurers, he ended his life in poverty and obscurity, dying of the plague in 1580.

xxxxxThe Lusiads, which means The Portuguese (from the ancient Roman name for Portugal, Lusitania) was based on the format of both Vergil's epic The Aeneid, and the romantic epic Orlando furioso, written by the Italian Ludovico Ariosto in 1516. As stated, the central theme of the work is Vasco da Gama's historical voyage to India, an adventure steeped in mythology and around which Camoens weaves glowing references to other heroic deeds of his people. Included, for example, is the Portuguese sea captain Lourenco de Almeida, who founded a settlement at Colombo in 1505 and died bravely in battle three years later (1508 H7). But the poem is not devoid of criticism. It contains some bitter comment concerning the harsh rule of his people in their role as colonial masters. 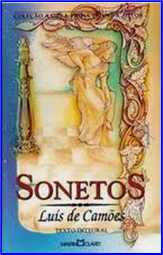 xxxxxDuring his extensive travels he also wrote some delightfully structured verse, much of it published after his death in the form of odes, elegies and sonnets. There is much on romantic themes - mostly on the well-worn conflict between passionate and spiritual love - but some of his work is the product of anguish and genuine suffering, and it is there that his verse excels. He wrote a number of other works, including three plays, but it is his epic and lyrical poetry that assures him of a place amongst the greatest European poets of his century. In his country of birth, these works, and especially Os Lusiadas, were to inspire Portuguese writers down the ages, and help to maintain the national spirit of his people at a time when they were struggling to gain and keep their independence.

xxxxxIncidentally, in 1639 the Portuguese poet and literary critic Manuel de Faria e Sousa (1590-1649) wrote a learned commentary on Os Lusíadas. Later, in 1825, another fellow countryman, the poet and dramatist Almeida Garrett (1799-1854), wrote his epic poem entitled Camões, in which he takes as his theme the poet's longing for home. He wrote it while in political exile in England, where he came under the influence of the Scottish novelist and poet Sir Walter Scott.