xxxxxThe best known among a family of Flemish artists, Pieter Bruegel the Elder drew inspiration directly from the life of the peasants around him, as in the Wedding Dance, the Netherlandish Proverbs, and the Wedding Feast of 1566. These crowded scenes, viewed from on high, are hives of activity and movement, capturing the coarseness, follies, vitality and humour of the labouring classes. His colours are strong, and he paints what he sees, be his characters fat, ugly or downright unwholesome, but he nonetheless shows a sympathy and respect for the working class they represent. In other works, like his Hunters in the Snow and Return of the Herd, he concentrates on country pursuits, and shows his talent as a landscape artist and his love of the mountain scenery he had seen during his stay in Italy. But Brueghel was also noted for his powerful biblical studies - such as the Tower of Babel and the Conversion of Paul - as well as a large number of drawings and engravings. He has come to be regarded as one of the great artists of his day. 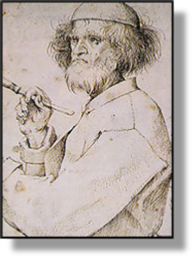 xxxxxPieter Bruegel the Elder is the most famous member of a family of Flemish painters, and has come to be regarded as one of the great artists of his day. He was born in a village near Bruges, and was trained in Antwerp. He then spent a few years in Italy but, unlike many of his Flemish contemporaries, he was little influenced by the works of the Italian Renaissance, save perhaps with regards to general composition. On returning to Antwerp, probably around 1555, he worked for a number of local engravers, notably Hieronymus Cock, and then, over a period of some eleven years (1558 to 1569) drew inspiration directly from the life of the peasants around him, his paintings depicting real people in real life situations. 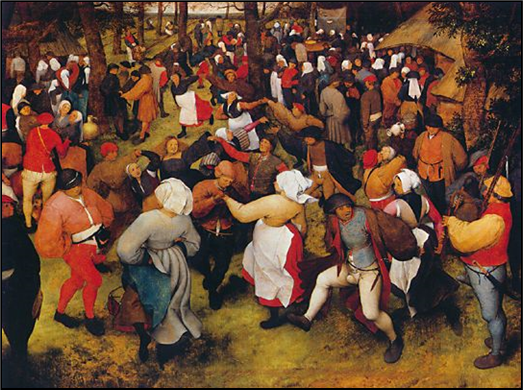 xxxxxNot for him, then, the idealised, classical beauty of form and figure. In works such as the Children's Games, Wedding Dance (illustrated), Netherlandish Proverbs, and the Wedding Feast of 1566 - always seen from a bird's eye view in order to widen the visual scope - he creates a crowded scene which is a hive of activity and movement, a microcosm of peasant life at work and at play. Using strong colours but a limited palette, he captures the coarseness, the vitality, the follies, the humour and, perhaps above all, the social cohesion of the rustic labouring class. In other paintings, like Hunters in the Snow, Return of the Herd, The Magpie on the Gallows, and The Peasant and the Birdnester, he concentrates on country pursuits, sometimes with a lesson to be learnt. Again, there is no concession to reality. The characters are often fat, plain and, at times, border on the unwholesome, but they are always painted sympathetically by the artist. He sought to depict the moral and material conditions of the actual totality of life. 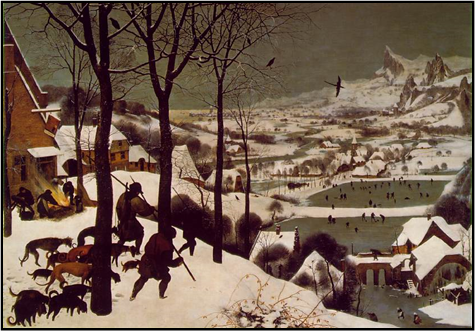 xxxxxFurthermore, although he did not bring back from Italy the lessons of a refined form of art, he did return with an abiding love of the country's landscape. As a man from the Netherlands, he was particularly fascinated and inspired by the beauty of mountain scenery, used to stunning effect, for example, in his Hunters in the Snow (illustrated). Apparently some of his contemporaries claimed that he had swallowed the mountains whole while in Italy, and then vomited them on to his pictures later! But in all his works, in fact, the background, whatever the subject or season, became an integral part of the total scene, not merely a scenic embellishment.

xxxxxBut "Peasant Bruegel", as he came to be known, did not confine himself to genre subjects. His biblical works - notably the Tower of Babel, The Suicide of Saul, and the Conversion of Paul - are powerful studies, made all the more arresting by the fact that the characters are dressed in contemporary clothing, a custom which, strangely enough, does not offend the eye as much as one thinks it should. His Parable of the Blind (detail illustrated below) is a particularly moving picture. There is, at times, too, an element of the grotesque in his work, clearly the influence of the Dutch artist Hieronymus Bosch. His Seven Deadly Sins, Combat between Carnival and Lent and The Triumph of Death, lend themselves to such treatment, and the distortion of figures here is easier to understand than some aspects of the message he is trying to put across. 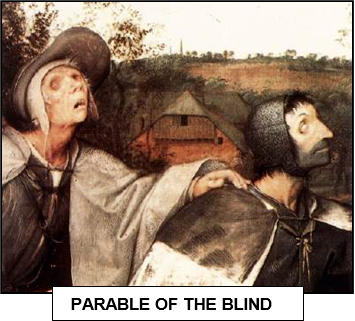 xxxxxA number of his works might well be political statements. The Massacre of the Innocents and The Census of Bethlehem, for example, have been seen as oblique references to the reign of terror being inflicted on the country at this time by the Spanish governor, the Duke of Alba. This may be so but, on the other hand, some of his patrons were Roman Catholics and it would not have been in his interest to alienate them. Apart from his paintings, he also produced a large number of drawings and engravings. Almost all his work was produced for private patrons, among whom was the Flemish geographer and cartographer Abraham Ortelius.

xxxxxIllustrated below (left to right) are: The Tower of Babel, The Gloomy Day, and Haymaking.

xxxxxBruegel's two sons were also painters (as were their sons!). Pieter the Younger, called "Hell", was a down-to-earth artist like his father, and specialised in religious subjects and vistas of hell, hence his nickname. Jan, dubbed "Velvet" because of his suave style, is better known for his land, seascapes, and still life. He often painted landscape settings for portrait artists, including some for his friend Peter Paul Rubens.

xxxxxIncidentally, the cartographer Abraham Ortelius from Antwerp was a friend of Bruegel and much admired his work. Writing in his Album Amicorum (Album of Friends) in 1573, four years after Bruegel's death, he described him as "the most perfect painter of his century".