xxxxxMary Queen of Scots (or Mary Stuart) became queen with the death of her father James V a few days after her birth. At the age of 16 she was married to the mentally retarded Dauphin, and the following year became Queen of France when he succeeded his father in 1559 as Francis II. She also claimed to be Queen of England on the grounds that the marriage of Elizabeth's mother to Henry VIII had been illegal. In 1561, following the death of Francis II, she returned to Scotland, a Roman Catholic monarch in a largely Protestant country. There followed a period of subterfuge. She married her cousin, Lord Darnley, and he plotted the murder of her secretary David Rizzio before he himself was assassinated by the Queen's new favourite, the Earl of Bothwell. In 1567 a revolt of Scottish nobles forced her to abdicate in favour of her son, James VI, and after attempting to regain her throne and losing the Battle of Langside, she fled to England in 1568. There she was imprisoned and inspired a number of Roman Catholic plots to overthrow Elizabeth. She was eventually executed following her implication in the Babington Plot of 1586. 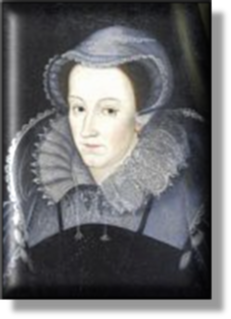 xxxxxMary Queen of Scots, a woman of great beauty and elegance in her younger days, lived a tragic life, divided between a turbulent seven years of drama, intrigue and murder, and nearly twenty years of weary imprisonment, pleading for her release and plotting against her captor. To her Catholic supporters she was a romantic, inspiring figure; to the Protestants a manipulating, cunning woman, guilty of adultery and suspected of murder. This femme fatale of Elizabethan times remains a fascinating, controversial figure even to this day.

xxxxxMary Stuart, as she is sometimes known, was the daughter of the King of Scotland, James V, and of the French Mary of Guise. She was born in Linlithgow Palace and became Queen of Scotland with the death of her father just six days later. She went to France for her education at the age of five, and eleven years later married the Dauphin, a weak, mentally retarded lad. When he succeeded to the throne as Francis II the following year, the Queen of Scotland also became the Queen of France. In addition, she assumed the title of Queen of England on the grounds that Elizabeth's claim was not valid because Henry VIII's marriage to Anne Boleyn (Elizabeth's mother) had been illegal. 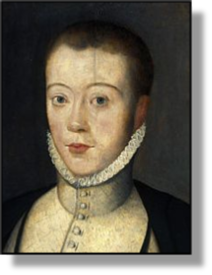 xxxxxIn 1560, however, Francis II died, and the following year she returned to Scotland, a Roman Catholic Queen in what was now a Protestant country. She recognised the reformed church - mainly the creation of the preacher John Knox - and despite some attempt to uphold the Catholic cause, she generally showed a large measure of religious tolerance. Atxfirst she was content to depend upon Protestant advisors, but in 1565 she married a Catholic Scottish nobleman, her cousin Lord Darnley (1545-1567) (illustrated), and this led to a Protestant uprising led by her half brother, the Earl of Moray. In the face of this rebellion the Queen showed remarkable courage. She took the field herself and quickly quelled the revolt. 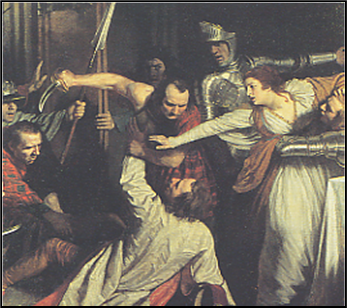 xxxxxBut her triumph was short-lived. Therexthen followed a period of intrigue and subterfuge in high places. Her husband, a weak but ambitious man, demanded that he should hold the title of King for life and, convincing himself that it was Mary's favourite, her secretary David Rizzio (c1533-1566), who was the one opposing this design, he entered into a conspiracy to have him killed. In March 1566 Rizzio was brutally murdered in front of Mary, then six months pregnant, his body stabbed 56 times (illustrated). Butxa year later Darnley was himself assassinated in a plot led by Mary's new favourite, the Earl of Bothwell (c1534-1578). Darnley's house at Kirk o' Field on the outskirts of Edinburgh was blown up by gunpowder, and he was found strangled in a nearby garden, presumably caught while he was trying to escape. BothxBothwell and Mary were implicated in the murder following the discovery of a silver casket which contained certain letters and poems written by Mary to Bothwell. He was brought to trial over what came to be known as the "Casket Letters", but the trial was a charade, and he was acquitted. He is then said to have "abducted" Mary. What is certain is that soon after the trial he divorced his wife and married the Queen.

xxxxxNot surprisingly, a rebellion of Scottish nobles followed. Maryxled an army against the revolt, but it was ill-disciplined and in June 1567 she was defeated at Carberry Hill. Bothwell (illustrated) fled to 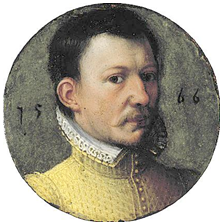 Denmark, and Mary was forced to surrender. She was imprisoned in the castle of Lochleven, and the next month was obliged to abdicate in favour of her son (born June 1566). He was crowned James VI at Stirling a few days later. Undaunted, Mary escaped from her island prison in May 1568 and, raising an army of some 6,000 men in the space of ten days, made a bid to retake her throne. It was not to be. Her men were soundly defeated at Langside, near Glasgow, by the king's forces, led by the Regent, the Earl of Moray. Realising that she had lost the support of her people, four days later she crossed the Solway Firth and sought refuge in the court of Elizabeth I.

xxxxxThe English Queen could only see her as a serious threat. She was closely connected to the English royal line - she was cousin to Elizabeth and grandniece of Henry VIII - and, as a Roman Catholic, she was regarded as the rightful monarch of England not only by the strong Catholic element within England itself, but also by the Pope and the kings of Spain and France. Elizabeth chose to keep her in captivity, and over the next eighteen years she was held in a series of prisons with the "honours and considerations due to her rank". But, as was to be expected, her presence in the country inspired a number of Catholic plots to put her on the English throne, probably with her connivance. In 1569 there was a serious rebellion in the North, and this was followed by the Ridolfi Plot (1571) and the Throgmorton Plot of 1584.

xxxxxFortunately for Elizabeth these attempts were foiled, whilst the next plot, that masterminded by Anthony Babington two years later, was fully uncovered and provided sufficient evidence of Mary's complicity in the conspiracy. The Babington Plot of 1586 thus sealed her fate. She was tried and found guilty of high treason. For some months Elizabeth hesitated, fearing the consequences, but in February 1587 she signed the death warrant, and Mary was executed a week later. The Spanish Armada prepared to sail!

xxxxxMary was beheaded in the great hall of Fotheringhay castle, near Peterborough. We are told that she went to her death with great dignity, aged 44. She was first buried in Peterborough, Cathedral, but in 1612 her son, then James I of England and Scotland, had her body removed and interred in an imposing monument in Westminster Abbey. Bothwell, having escaped to Denmark, was imprisoned in Dragshelm Castle. He eventually became insane and died there in 1578.

xxxxxIncidentally, Mary is thought to be the first woman golfer. She learned the game from her grandfather, James IV of Scotland, and took it with her when she went to France as a young child. The young men who attended her on the course were known as cadets (pupils), hence today's word caddy or caddie. The Romans played a kind of golf, but the name originates from the Dutch word for club, kolf. It became popular in Scotland during the 14th or 15th century. ......

xxxxx..... And it would seem that Mary was also a dab hand at billiards! While awaiting execution in 1586 she complained that someone had taken away her billiard table! At first, billiards was an outdoor game, and the first reference to a "table" was in 1470 when one was purchased by Louis XI of France. In those days the cue was a thick wooden stick called a mace, and there were no pockets. The ball had to be struck through a small wooden arch that stood on the table top.