xxxxxAs we have seen, in 1567 Philip II of Spain sent the ruthless Duke of Alva to the Spanish Netherlands to put down a Protestant revolt. In fact his six years of bloody persecution only served to increase the demand for independence, and he was relieved of his command. But the killing continued, and reached new heights with “the Spanish Fury”, the sacking and looting of Antwerp in 1576. Such was the ferocity of this attack that for a time both Catholics and Protestants attempted to unite against Spanish rule. When this failed, the northern Protestant provinces formed the Union of Utrecht in 1579 under the leadership of William I of Orange and, two years later, in 1581, declared independence. But it was not yet to be. William I was assassinated in 1584, and although the English sent troops to aid the Dutch, and they did gain a degree of freedom under their new leader Maurice of Nassau, the struggle then merged into the Thirty Years’ War, and full independence did not come until its end in 1648 (C1).

xxxxxIn 1566 the Protestants in the Spanish Netherlands broke out in open revolt against the oppressive rule of the Spanish king, Philip II, an ardent Catholic. A section of the lesser nobility, known as "Les Gueux", demanded an end to the Inquisition and freedom of worship. In response, as we have seen, in 1567 Philip sent the Duke of Alva with 10,000 troops to restore law and order. The result was six years of even bloodier persecution. In 1573, however, Philip II was obliged to recall Alva. Not only had he stirred the Protestants into a more widespread state of rebellion, but he had also alienated the Catholic population by the introduction of hefty taxes on property and the sale of land, buildings and goods. 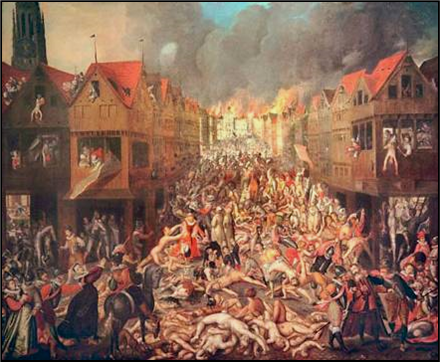 xxxxxButxeven with the departure of Alva and the abolition of his dreaded "Council of Blood", the killing continued, and reached new heights with "the Spanish Fury", the sacking and looting of Antwerp in 1576, during which some 8,000 inhabitants were slaughtered (illustrated). By this time, such was the opposition to Spanish rule that delegates from all the provinces, Catholic and Protestant alike, went so far as to sign the Pacification of Ghent, attempting to create unity in a bid to gain independence. But their differences proved too great for such a move. Dissension broke out, the religious split reappeared, and imperial forces soon regained control of the five Catholic provinces in the south (today's Belgium). 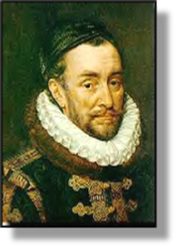 xxxxxInx1579, however, all the northern provinces and some territories in the south, formed the Union of Utrecht, under the leadership of William I of Orange (known as "The Silent" and illustrated). Then two years later, in 1581, the seven Dutch provinces (shown in purple on the map) took the bold step of declaring their independence. But it was not to be an auspicious beginning for what was to become the modern state of The Netherlands (or Holland). In 1854, William was assassinated, and this proved a serious blow to the fight for freedom. By the following year the Spanish had conquered practically all of the south, including the port of Antwerp. It was at this juncture, however, that the English made a vital contribution to the Dutch cause. Elizabeth sent over troops to assist the insurgents, and in 1588 the English defeat of the Spanish Armada seriously weakened the Spanish hold on the Netherlands.

xxxxxBy 1600, the seven northern provinces, under the leadership of Maurice of Nassau, son of William I, had rid their territories of Spanish troops, and from 1609 a truce of sorts was in place over the next twelve years. But, as we shall see, the struggle then resumed as part of the Thirty Years War, and it was not, in fact, until 1648 (C1), when the war came to an end, that the Dutch Republic became a reality.