xxxxxThe famous English poet and playwright William Shakespeare probably went to work in London in the late 1580s. By 1603 he was one of the directors of The King’s Men, based at the Globe Theatre at Southwark. His output was phenomenal. As a poet he wrote 154 passionate love sonnets, two long narrative poems, Venus and Adonis, in 1593, and the Rape of Lucrece the following year. As a dramatist he wrote or greatly assisted in the making of 38 plays, and these were highly popular with the general public and at the courts of both Elizabeth I and James I. In his early works, his blank verse was rather stultified, and the action restricted to one theme. To this period belong Henry VI, Richard III, the farces The Comedy of Errors and The Taming of the Shrew, and the bloody revenge tragedy, Titus Adronicus. From the mid-1590s, however, his works revealed his remarkable insight into human nature, seen in his interpretation of character, his mastery of words and blank verse across the whole gambit of human emotion, and his introduction of sub-plots and secondary characters. And remarkable, too, was his width of subject matter, from tragedy to farce, fantasy and romantic love. At this time his plays included Henry IV and V, his comedies, A Midsummer Night’s Dream, Much Ado About Nothing and The Merry Wives of Windsor, the tragic love story Romeo and Juliet, and the Merchant of Venice and Twelfth Night. And to this glittering array of talent must be added two of his outstanding dramas, Julius Caesar (1599) and Hamlet. And yet to come, as we shall see, were his other great tragedies, Othello, King Lear, Antony and Cleopatra and Macbeth, produced in 1606 (J1), and doubtless in honour of his new king, James I. 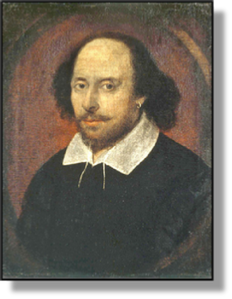 xxxxxWilliam Shakespeare, one of England's most talented playwrights, was born in Stratford-on-Avon, the eldest son of a leather and wool merchant. In about 1577 his father's business - highly profitable up until then - began to founder, and William was obliged to make his own way in the world. He was educated at the local grammar school and, on leaving there, might well have been a schoolteacher or an apprentice butcher for a time. What is certain is that he married a local farmer's daughter, Anne Hathaway, in 1582, and they had a daughter Susanna a year later, and twins Judith and Hamnet in 1585. Sadly, his son died at the age of eleven.

xxxxxLittle is known about the next few years, but we are told that by 1592 he was busy in London, working as an actor and playwright. He may well have gone to the capital in the late 1580s to earn more money and, if so, then he certainly achieved his aim. Such was his success that by about 1594 he was a leading member of the Lord Chamberlain's Company of actors, whose number included the leading tragedian of the day Richard Burbage. In 1597 he could afford to buy New Place, one of the largest houses in his home town of Stratford. Two years later the company demolished their regular playhouse, The Theatre, and used much of the timber to construct The Globe on the southern bank of the River Thames at Southwark. By 1603, he was the principal playwright and one of the directors of the company, now renamed The King's Men in honour of the new monarch, James I. By then he owned a large amount of property in both London and Stratford. 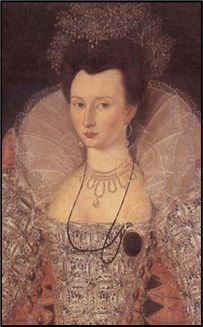 xxxxxShakespeare's stage work can be divided into four broad categories: his lyric plays, such as A Midsummer Night's Dream and Romeo and Juliet; his comedies, including As You Like It and Measure for Measure; his historical plays, notably Henry V and Richard III; and his great tragedies, like Hamlet, Othello and Macbeth. Manyxof the plots and themes for these plays were gleaned from earlier fiction and adapted to suit his purpose, and for his historical works he lent heavily upon the Chronicles of the English historian Raphael Holinshed (c1529-c1580), and other documentary evidence.

xxxxxAs a poet he wrote two long narrative poems, both dedicated to his patron the Earl of Southampton; Venus and Adonis in 1593 and The Rape of Lucrece the following year. His passionate love sonnets, a total of 154, were written over a number of years and were published in 1609. Some refer to a fair youth (possibly the Earl of Pembroke) and a mysterious "Dark Lady", who might well have been the object of his desire. She is thought to have been Mary Fitton, the Queen's maid and Pembroke's mistress (illustrated above).

xxxxxThe sheer volume of Shakespeare's production is awe-inspiring. Apart from his poetry, he wrote or had a big hand in the making of 38 plays. They generally provided entertainment for the masses, and were regarded as vulgar by the Puritans. Nevertheless, many of the nobility were patrons of the theatre, and the plays were shown frequently at the courts of Elizabeth and James I, where, according to Ben Jonson, they were highly regarded. Later, regular performances were given at The Blackfriars, a private indoor theatre, where admission charges were sufficiently high to keep out all but the well-connected. 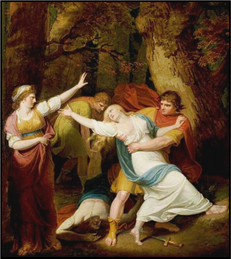 xxxxxThe production of his plays began about 1589, though it is clear that for five or six years after this date he was experimenting with the order of construction and still learning the basic techniques of his trade. At this time, his blank verse was somewhat stultified, and the action was restricted to the one and only theme. To this period belong the plays Henry VI and Richard III, the weak and/or evil leadership of these monarchs designed to contrast with the upright rule of the Tudor dynasty. Among his comedies are the boisterous farces The Comedy of Errors and The Taming of the Shrew, and Love's Labour's Lost, a play that pokes fun at the pretensions of aristocratic society. Also produced at this time was Titus Andronicus (here illustrated), a bloody revenge tragedy, based upon the style of the Roman dramatist Seneca, and clearly influenced by the work of the contemporary dramatist Thomas Kyd.

xxxxxAs from the middle of the 1590s Shakespeare's work began to take on a more individual format and style, marking him out as a playwright of pure genius. His interpretation of character became very much more complex and convincing, his mastery of words and blank verse created a brilliant medium for the whole gambit of human emotion, and his introduction of sub-plots and secondary characters - such as Falstaff and Bottom - added interest and a wider view of society. But technical skill apart, perhaps the most remarkable feature of his work was the width of his subject matter. His plays ranged from the tragic depths of murder, intrigue and despair to the happy heights of farce, fantasy and romantic love. And whether they portrayed the passions of tragedy, the delicate awakening of young love, or the earthy humour of comic events, they took the audience with them. Such was his extraordinary insight into human nature that his plays became universal in time and place. As Ben Jonson put it: “Shakespeare was not of an age but for all time". 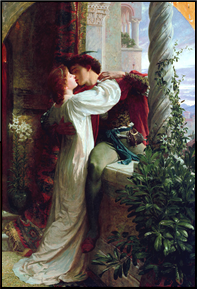 xxxxxBelonging to this later period are a number of sensitive portraits of kingship, including Richard II, Henry IV and Henry V, some highly successful comedies, such as A Midsummer Night's Dream, Much Ado About Nothing, As You Like It, and The Merry Wives of Windsor - possibly written at the request of the Queen - and three very popular productions, the tragic love story of Romeo and Juliet (here illustrated), The Merchant of Venice and Twelfth Night. Also written in this period were two of his most compelling dramas: Julius Caesar (1599), a political murder against a background of intrigue and treachery, and Hamlet, the sad fortunes of the Prince of Denmark.

xxxxxThis brilliant outpouring of plays, brought him to the height of his fame, but by no means to the peak of his achievement. As we shall see, yet to come were the other great tragedies with which Shakespeare's name is for ever remembered: Othello, King Lear, Antony and Cleopatra and Macbeth, produced in 1606 (J1) in honour of his new king James I. 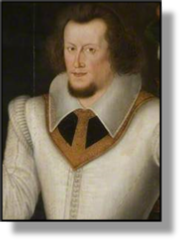 xxxxxIncidentally, Shakespeare had a high regard for the Queen's favourite the Earl of Essex (illustrated), comparing him with the young Henry V in his play of that name, but this friendship almost landed him and his company in serious trouble. Essex, you may recall, having fallen out of favour with Elizabeth and been disgraced, led a rebellion against her in 1601. On the eve of the revolt, staged in London, his supporters, who included the Earl of Southampton, persuaded the company to put on a performance of Richard II. This was a play concerned with the "deposing and killing" of the monarch, and the conspirators doubtless hoped that this would help to stir up the people against the Queen. After the failure of the rebellion and the execution of Essex, the coincidence did not go unnoticed! An inquiry was held, but fortunately for Shakespeare and his fellow directors, the company was cleared of any complicity in the uprising. …… 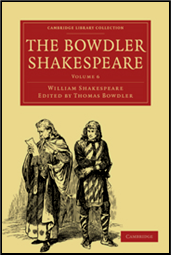 xxxxx…… Manyxyears later, 1807 in fact, an English doctor and writer Thomas Bowdler (1754-1825) produced his first edition of what he called his Family Shakespeare. This and his later publication of 1818 aimed at providing a selection of Shakespeare’s works which, cleansed of all that might corrupt young minds, could be safely read aloud to children. He later published an edited version of Edward Gibbon’s The Decline and Fall of the Roman Empire. Within a short while the verb “bowdlerize” was being used in place of “expurgate”, meaning to purify or remove objectionable or vulgar material. Today, it can also be used in the sense of modifying or simplifying a piece of writing, and is often associated with the idea of censorship.