xxxxxThe German mapmaker Gerardus Mercator produced a number of maps - including one of the world - during the 1530s, and these were noted for their fine italic lettering. It was later, in 1569, that he published a world map using the method of projection which today bears his name. This method distorted the land masses, but proved extremely useful for navigational purposes. Also to this period belong maps of Europe and the British Isles, and a highly accurate study of Lorraine, based on a detailed survey. His final project was the compilation of a vast "Atlas" containing a large collection of maps. It remained incomplete at his death, but was published by his son in 1595. This work was later enlarged by other cartographers. 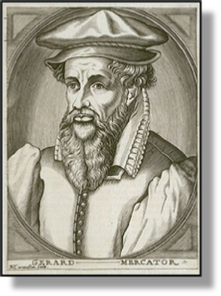 xxxxxGerardus Mercator (the Latinised form of his name Gerhard Kremer), was born in Flanders of a German family. He first studied the humanities and philosophy at the University of Louvain, but after two years of further study at Antwerp and Mechelen, he acquired an interest in geography. Returningxto Louvain he teamed up with the eminent physician and astronomer, Gemma Frisius (1508-1555) and with Gaspar à Myrica (1530-1586), a local engraver.

xxxxxOver the years 1535 to 1537 they constructed their first terrestrial and celestial globes and, in the same period, Mercator - by now an accomplished engraver and geographer in his own right - produced a number of maps, including those of Palestine, Flanders and the World. A notable feature of these globes and maps was the graceful italic lettering he employed. Such was the interest in this style of writing that in 1540 he printed a manual on italic lettering, using his own wood-blocks to illustrate the script.

xxxxxThe latter part of his life was spent at Duisburg, where he became the court cosmographer to Duke Wilhelm of Cleves. It was during this period that he perfected and then published in 1569 a world map using the method of projection which today bears his name. Only four of these maps are still in existence. In this method, the parallels and meridians are drawn uniformly at right angles over the entire map, forming a grid. This method clearly distorts the land-masses, but proved extremely useful when 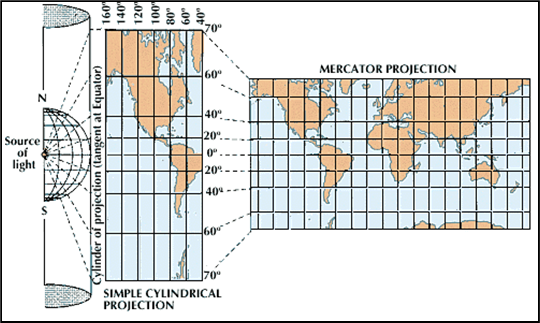 used for navigational purposes because courses could be plotted along straight lines without the need for constant compass readings. During this period he also produced another collection of maps, including ones of Europe and the British Isles, and a very accurate map of Lorraine based on a detailed survey - the first to be made with such precision. By way of diversion, he also found time to teach mathematics at the local grammar school, and compile both a Concordance of the Gospels and a commentary on part of Paul's letters to the Romans!

xxxxxHis final and most ambitious project was the compilation of a great "Atlas", designed to contain a large collection of maps. The first section, begun in 1569, was a chronology of the world from its creation to the year 1568. To this he added 27 maps originally prepared by the Greek geographer Ptolemy, and then another section with revised maps of the Netherlands, France, Germany, Greece and the Balkans. Before his death in 1594 he finished the section of maps on the British Isles, and the entire work - by no means completed - was published by his son the following year. Axfurther print was made in 1602 and then maps were added by the Dutch cartographer Jodocus Hondius, the edition of 1606 being generally known as the "Mercator-Hondius Atlas".

xxxxxIncidentally, it was Mercator who coined the word "Atlas" to mean a collection of maps. On the cover of his last big project he put a picture of Atlas, the Titan, carrying the world on his shoulders. 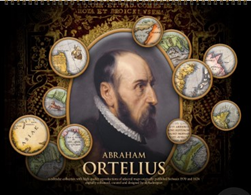 xxxxxThe first modern atlas is considered to be the one produced by the map-maker Abraham Ortelius of Antwerp (1527-1598). Entitled Theatrum Orbis Terrarum (Theatre of the Earth), it contained some sixty maps and was published in 1570. This was the largest collection available at the time, but a number of the maps were inaccurate and others were direct copies from earlier works. In 1575 he was appointed geographer to the court of Philip II of Spain. There he published travel accounts and gained fame as a dealer in antique maps and books.

xxxxxAs we shall see, further advances in map making were made by two Frenchmen during the 18th century: Guillaume Delisle (1700 W3) and Bourguignon d'Anville (1743 G2).

xxxxxIncidentally, as noted earlier, Ortelius was a friend of Pieter Bruegel the Elder and much admired his work. In his Album of Friends, completed in 1573, he describes the Flemish painter as “the most perfect painter” of his time.