xxxxxThe English seaman John Hawkins is best known for his role as a naval commander at the time of the Spanish Armada in 1588. Earlier, however, as a privateer, he has the dubious distinction of leading the first English slave-trade expedition from West Africa to the West Indies in 1562. He made further voyages in this tragic trade in 1564 and 1567. Then in 1571 he entered Parliament, and six years later was appointed treasurer to the navy. In this post he made substantial improvements to the English fleet, both in the number of vessels and in ship design, thereby contributing to the victory of the English navy when the Spanish eventually launched their attack. He died at sea while attempting to capture Puerto-Rico. 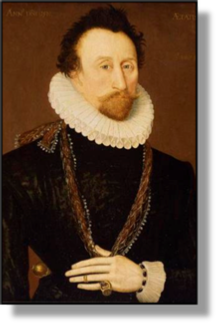 xxxxxJohn Hawkins, one of the ablest seamen of his time, was born in Plymouth, Devon. He is best remembered today for his role as a commander against the Spanish Armada in 1588, or for the fact that he was one of the first, if not the first, to introduce sweet potatoes and tobacco into England. But he also has a distinction of a much less worthy nature. In 1562, as a privateer, he led the first English slave-trading expedition from West Africa to the West Indies, and made two further voyages with human cargo in 1564 and 1567. Sought by the Spaniards for encroaching on their trading rights, he was sighted whilst returning from his last expedition and attacked by a Spanish squadron in the harbour of San Juan de Ulúa near Veracruz (in Mexico) - illustrated below. Only two ships out of six managed to escape, one commanded by Hawkins and the other by Francis Drake, then in his twenties. 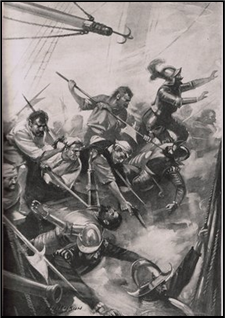 xxxxxHawkins entered parliament in 1571 and six years later succeeded his father-in-law, Benjamin Gonson, as treasurer to the navy, an appointment which enabled him to prepare the English fleet for what he saw as the inevitable war with Spain. He increased the fleet's size, made many improvements in ship design, and streamlined naval administration. When the Spanish attack did materialise in 1588, he was third in command of the fleet, and served as a rear admiral in the Victory. He was knighted that year, not only for the active part he played in the defeat of the armada, but also in recognition of his earlier work as the architect of a navy which, when the need arose, proved more than a match for the Spanish warships.

xxxxxTwo years later he made a voyage to the Azores in an unsuccessful attempt to intercept a Spanish silver fleet, and in 1595 he died at sea - probably of dysentery - when, together with Sir Francis Drake, he was preparing to capture Puerto Rico with a force of 27 ships. This ill-fated voyage also took the life of Drake. The expedition having turned for home, he died of a fever just off the coast of Panama in January the following year. Both Hawkins and Drake were buried at sea.

xxxxxIncidentally, Hawkins' son Richard served under Sir Francis Drake during his expedition to the West Indies in 1585, and commanded the Swallow during the defeat of the Spanish armada. During a voyage to South America he was captured by the Spanish and imprisoned first in Peru and then in Spain. After payment was made for his release, he returned to England in 1602 and was knighted the following year.