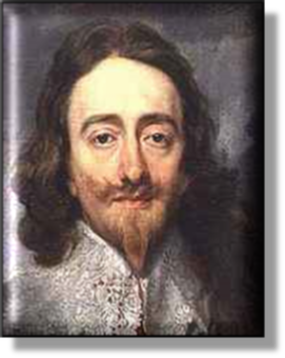 xxxxxCharles I was not born heir to the throne, but became so at the age of 12 following the death of his elder brother Henry in 1612. He became King of England, Scotland and Ireland in 1625. and, like his father James I, was a firm believer in the Divine Right of Kings. His total disregard of Parliament and what this body stood for eventually led to the fall of the monarchy and his own execution. A shy, reserved man with a slight stammer, he lacked the common touch, and came to depend on favourites for advice. Nor was he the imposing figure of a man that Van Dyck would have us believe! However, he was a courteous, well-meaning and religious man, and as a member of the High Church Party, stressed the importance of the English prayer book and the maintenance of ritual. Little surprising therefore that Puritans in the Commons should sometimes accuse the Anglican Church of "popish practices".

xxxxxThe prediction of his father concerning future conflict with Parliament was proved right with ominous speed. Needing money to fund his war with Spain, but unable to accept the growing demands of the House of Commons, he dismissed two parliaments in quick succession. In 1628, however, in order to receive much needed funds, he was obliged to convene another meeting and to accept the Petition of Right. Among other demands, this stipulated that the king should not levy taxes without parliamentary consent, and that no subject should be imprisoned without just cause. 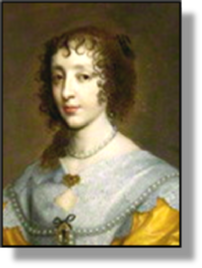 xxxxxThe following year, however, alarmed at the way events were shaping, he dismissed Parliament once again, imprisoned a large number of its leaders, and, this time, ruled without parliament for what his opponents termed the Eleven Years' Tyranny. During these years he governed through royal courts, notably the Court of the Star Chamber, and, to reduce his expenses, made peace with Spain and France. For his income, he was now obliged to raise taxes by any means possible. One of these means, for example, was the so-called Ship Money tax, a levy which caused widespread discontent. Ostensibly introduced to expand the navy, it was first imposed on ports and then extended to inland towns. And money was also obtained by forced loans and a wide range of custom duties. This high-handed action was supported by his French wife, Henrietta Maria (illustrated), whom he had married in 1625. A Roman Catholic, she inevitably aroused a great deal of suspicion and ill-feeling among her Protestant subjects.

xxxxxAlsoxunpopular in parliament and the country at large was the king's favourite George Villiers, the Duke of Buckingham. In October 1625 he led a disastrous naval expedition against the Spanish port of Cadiz, and followed this up two years later with an equally pathetic attempt to relieve the French Huguenots, besieged at La Rochelle. Andxfollowing his assassination in 1628 two other close advisors attracted the public's antipathy, the Earl of Strafford, the Lord Deputy of Ireland, and the Archbishop of Canterbury, William Laud, both staunch supporters of an absolute monarchy.

xxxxxIt was Laud, above all, who sought to diminish the influence of the Puritans, then dominant in Parliament. In 1637, as part of this policy, Charles introduced the reform of the Presbyterian church of Scotland, introducing the English prayer book and the office of Bishop into its administration. But the Scots would have none of it and, two years later, invaded England and involved Charles in two conflicts, aptly called the Bishops' Wars of 1639 and 1640. Indirectly, these proved the first step on the slippery slope to civil war. Unable to meet the cost of such a struggle, Charles was obliged to reconvene Parliament in 1640 and ask for money. This "Short Parliament" (it only lasted a month) refused funds, and promptly handed him a list of grievances. By this time, however, 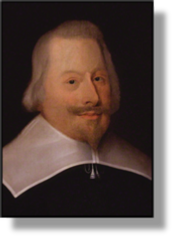 a Scottish army had crossed the border, defeated a royalist force led by Strafford, and occupied both Newcastle and Durham. The "Long Parliament" was then called to raise a more efficient army, but once again it insisted on reform before assistance. Led by John Pym (illustrated), it declared that the King's taxation had been illegal, abolished the Star Chamber and other royal courts, and voted that Parliament could not be dissolved without its consent. Greater religious freedom was granted to the Scots, and those who had sought to anglicise their Presbyterian church or oppose them were dealt with. Strafford was condemned to death and Laud a few years later.

xxxxxThe final straw came towards the end of 1641 when Charles heard of a revolt in Ireland, led by Rory O'More, in which thousands of English protestants were being massacred. When parliament refused yet again to raise an army without a redress of grievances - this time contained in the Grand Remonstrance - Charles could tolerate the situation no further. In January 1642 he took matters into his own hands, and, entering the House of Commons with a large body of armed soldiers, attempted, - unsuccessfully - to arrest Pym and four other leading members of the chamber. This action at once drew the battle lines between the Royalists, who believed that the King had a divine right to govern, and the Parliamentarians, who believed that Parliament had a political right to govern. The king left London almost immediately and in August, raising his standard at Nottingham, declared war.

xxxxxIn the Civil War that raged over the next three years, Oliver Cromwell, a member of Parliament, eventually emerged as the undisputed leader of the Parliamentary cause. Rallying to his side all those who supported the rights of Parliament and the Protestant faith, he helped to form an efficient Model Army and to defeat the Royalist forces (or Cavaliers) at the Battle of Naseby in 1645. The king the 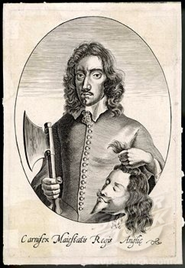 n became a pawn in a struggle for power. He surrendered to the Scots at Newark, but because he still refused to accept Presbyterianism, they handed him over to the Parliamentary forces in January 1647. Then the army seized him and held him at Hampton Court. In November, however, he managed to escape to the Isle of Wight, where he was imprisoned yet again, this time in Carisbrooke Castle. Here, while attempting to play one side off against the other, he secretly negotiated a Scottish invasion in support of his cause. But his hopes were dashed the following year when the Scots, having invaded England, were crushed by Cromwell at the Battle of Preston. The king's time and good fortune had run out. He was brought to trial at Westminster, found guilty of treason, and beheaded in January 1649. He was buried in St. George's Chapel, Windsor.xxxxx

xxxxxIncidentally, Charles ordered the re-publication of his father's Book of Sports, much to the annoyance of the Puritans, and insisted that all clergy should read it. We are told that many were punished for refusing to do so. (Later, during The Commonwealth, sports and games were prohibited on the Sabbath). A cultured man and a patron of the arts, he brought both Van Dyck and Peter Paul Rubens to work in England.