xxxxxMainly because of Spain's decline from greatness - becoming apparent by the middle of the century - the work of Velasquez, whilst influencing contemporary artists in Seville (such as Francisco Zurbaran and Bartolomé Murillo), remained little known in Europe until after the Napoleonic Wars. From then onwards, however, his painting became much appreciated, and inspired a number of artists, in particular his countryman Francisco Goya, the French impressionist Édouard Manet, and the 20th century American painter Edward Hopper.

xxxxxIncidentally, the stunning portrait of his servant Juan de Pareja (illustrated above), simply painted as a practice piece before he began his portrait of Pope Innocence X, became a masterpiece in its own right. At auction in 1970 it stunned the art world when it raised £2,310,000! Prior to this no painting had even reached the million mark! 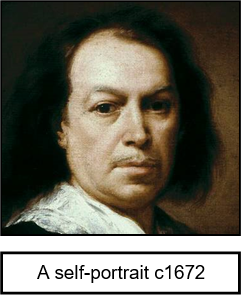 xxxxxAs mentioned above, a fellow artist and countryman at this time was Bartolomé Murillo (1617-82). He was born in Seville, like Velazquez, and, by visits to private collections, became familiar with the works of a number of Renaissance masters. He later visited Madrid where he almost certainly met up with Velasquez, and had time to study paintings by Titian, Rubens and others in the royal collection. A painter, early on, of religious subjects, he soon developed a tender style, bathing his depictions of the Madonna and the Holy Family in a soft, warm light, and producing colours rich in depth but delicate in tone. His idealised, sentimental treatment of such subjects made him one of the most popular baroque painters in 17th century Spain, and earned him a European reputation. 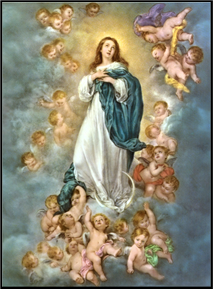 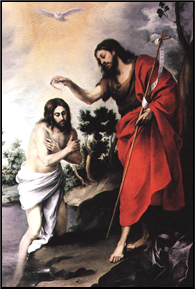 xxxxxHis eleven scenes from the lives of various saints, completed in 1646 for the small cloister of San Francisco in Seville, greatly enhanced his reputation and brought him a vast number of commissions, many from outside the city. It is said that during his career he painted 30 versions of the Immaculate Conception and of the virgin and child. Some of his work was produced as devotional images for the New World, and these included a mural for the cathedral in Guadalajara in western Mexico. He was the first president of the Seville Academy, founded in 1660, and, with the help of several assistants, produced a large number of works for the city's monasteries and churches. Notable among these were his Vision of St. Anthony for the cathedral, and a series of canvases for the Hospicio de los Venerables Sacerdotes, including the celebrated Immaculate Conception, a work of infinite tenderness painted in his "vaporose" (misty) style (illustrated left). His Baptism of Christ is illustrated on the right. 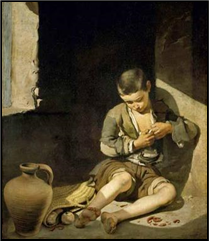 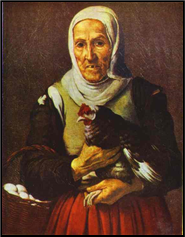 xxxxxApart from his religious themes, he was a fine genre painter. Indeed, today he is best remembered for his sympathetic depiction of street urchins, such as The Melon Eaters, Two Peasant Boys and his Young Beggar (illustrated left), the last named completed in 1655 and now in the Louvre, Paris. Illustrated on the right is his Old Woman with a Hen. These works are rightly admired for their human warmth and the realistic rendering of the still-life accessories. Some, it must be said, border on the sentimental - but they proved very popular during the 18th and 19th centuries. They influenced a number of artists, and inspired, as we shall see (1760 G3a), the so-called "fancy pictures" of the English portrait painter Thomas Gainsborough.

xxxxxMurillo died in 1682 following an accident. He fell from the scaffolding while working on the Mystic Marriage of Saint Catherine in the Capuchin church at Cadiz. His Self-Portrait (illustrated above), now in the National Gallery, London, is generally considered to be one of his finest works.

xxxxxThe Spanish artist Bartolomé Murillo (1617-82), who met up with Velasquez in Madrid and also studied the works of Titian and Rubens, developed a tender style, particularly noticeable in his early religious paintings. His career took off following the success of his eleven scenes depicting the lives of various saints, completed in 1646. He produced a large number of works for the churches and monasteries in Seville including his celebrated Immaculate Conception, a portrayal of infinite tenderness painted in his “misty” style. In fact, however, he is remembered today for the human warmth of his genre paintings, notably his sympathetic rendering of street urchins in works such as The Melon Eaters and The Young Beggar. These inspired the so-called “fancy pictures” of the English portrait artist Thomas Gainsborough.

xxxxxThe Spanish painter Velasquez, court painter to Philip IV, was noted for his subtle colours and brilliant brushwork. He produced religious and genre paintings, but he excelled as a portrait artist, showing a remarkable ability to capture the character of his sitter, be he a monarch, aristocrat or commoner. Among his outstanding portraits are those of his servant Juan de Pareja, Pope Innocent X, and The Maids of Honour. Portraits apart, he is especially remembered today for his brilliant historical scene The Surrender of Breda, completed in 1635, and his captivating nude, the Rokeby Venus. Particularly notable among his religious works are The Immaculate Conception (in the National Gallery, London) and his Christ on the Cross. He became a close friend of Rubens, who visited Madrid in 1628, and he later met Nicholas Poussin and Giovanni Bernini. His style was influenced in part by Caravaggio and Titian, and his own work inspired Murillo and, later, artists such as Goya, Manet and Hopper. 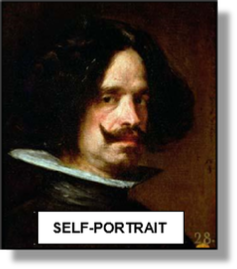 xxxxxThe Spanish painter Velasquez, long-time court painter to Philip IV, was one of the most talented artists of the 17th century, noted for his subtle colours and brilliant brushwork. Apart from his numerous portraits - the vast majority depicting members of the royal family -, he produced scenes of everyday life (like Old Woman Frying Eggs,) and some memorable religious paintings. But whatever his theme, his overriding aim was to depict his subject exactly as he saw it. As far as portraiture was concerned, this eye for the truth revealed an extraordinary ability to depict character accurately and sympathetically, be it that of a monarch, court jester or a water seller - the subject of his famous painting of 1620. 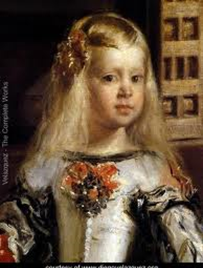 xxxxxUnlike many other artists, he worked slowly. This fact, combined with his preoccupation with court appointments, meant that his output was remarkably small for a career spanning some forty years - probably no more than 200 canvases in total, of which about half have survived. Among his outstanding portraits are two executed in 1650, those of his servant Juan de Pareja and Pope Innocent X (both illustrated below), and the delightful Las Meninas (Maids of Honour) in which the young Infanta Margarita is highlighted centre stage (detail illustrated here), and Velasquez himself is seen at his easel. His religious paintings included The Immaculate Conception, (now in the National Gallery, London) and a powerful rendering of Christ on the Cross.

xxxxxBut equally outstanding are two works outside his normal themes, one portraying a moment in history, the other a reclining nude. The Surrender of Breda, completed in 1635 and commemorating the Spanish capture of the Dutch town ten years earlier, ranks as one of the most successful paintings depicting a contemporary historical event. The gesture of clemency shown by Ambrogio Spinola, the Spanish commander, as he receives the key to the city is brilliantly depicted (detail illustrated below), as are the mixed emotions of the scene itself. It was painted as one of a series of works depicting the military successes achieved during Philip IV's reign - though, in fact, Breda was recaptured by the Dutch two years after the painting was completed! 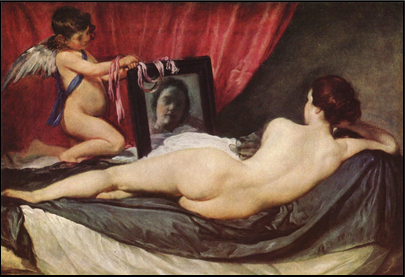 xxxxxIt is known that Velasquez painted a number of female nudes, but the lovely Rokeby Venus (illustrated) is the only one which has survived. More's the pity. Clearly inspired by the Venetian artist Titian, this work of natural beauty was painted for a Spanish nobleman, but later came into the possession of the Morritt family from Rokeby in Yorkshire, hence its name. It can now be seen in the National Gallery, London. In 1914 a suffragette visited the Gallery and badly damaged the Rokeby Venus, slashing it with a knife. It was expertly repaired, but if one examines the painting carefully the marks of the attack can still be seen.

xxxxxVelasquez was born in Seville, and showed artistic promise at an early age. He was apprenticed to Francisco Pacheco, a local artist, and, via him, became acquainted with a cultured circle of painters and scholars. In 1619 he painted his Adoration of the Magi, but in this early period he tended to concentrate on "bodegones" (or "kitchen pictures"), depicting peasant life in accurate detail - much in the style of Caravaggio. In 1622 he visited Madrid, and it was while there that he painted a portrait of the Spanish poet Luis de Gongoraff. This work so impressed members of the royal court that he was allowed to paint a portrait of the king. For the young Velasquez, aged 24, it was the start of a long friendship and a highly successful career. The king, himself only eighteen, virtually adopted him. He provided him with a workshop in the royal palace, and was soon showering him with important court appointments

xxxxxIn 1628 Rubens visited Madrid on a diplomatic mission, and the two artists struck up a close friendship, assisted no doubt by their mutual admiration for Titian, whose works they studied at the Escorial. It was probably Rubens who encouraged him to travel to Italy the following year. He studied the great masters in Venice, and then visited Rome, ending his tour at Naples. Most of the work he carried out in Italy was subsequently lost, but the influence of classical art and the skill of the Renaissance masters are to be seen in the two canvases which have survived - his Joseph's Coat and The Forge of the Vulcan. Here again, however, his own sense of realism is evident. 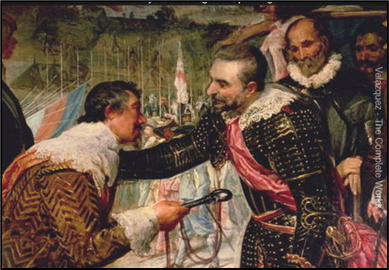 xxxxxVelasquez paid a further visit to Rome in 1649, during which he painted the celebrated portrait of Pope Innocent X and the Rokeby Venus. On this occasion he met the French artist Nicholas Poussin, who spent much time in Italy, and the famed Italian sculptor and architect Giovanni Bernini. But this visit apart, on returning to Madrid in 1631 he spent the rest of his life - some thirty years - in court service. To this period belongs some of his finest portraiture and his masterpiece, the Surrender of Breda, produced in 1635 (detail illustrated here), known in Spain as Las lanzas (The Lances) because of the mass of pikes which form a background to the Spanish contingent. In the last five years of his life he produced his famous group paintings, Las Meninas and Las Hilanderas (The Tapestry Weavers), both showing his mastery of colour and tone. During this long period in Madrid, his artistic output would surely have been greater had it not been for the large number of administrative duties he was obliged to carry out as a leading court official and the royal architect.

xxxxxVelasquez married Juana, the daughter of his tutor Francisco Pacheco, in 1618, and they had two daughters, one of whom died in infancy. His wife may well have been a model in his religious works The Adoration of the Magi and the Immaculate Conception, dated 1644. It would seem that whilst in Rome in 1650 he had an affair with a widow called Martha, and fathered an illegitimate son named Antonio. If such were the case, it in no way affected his standing on his return to Madrid. In November 1659, with the blessing of the pope, he was made a Knight of the Order of Santiago. The following year he made a diplomatic mission to the Franco-Spanish border. He returned exhausted and died of a fever in August, his grieving wife surviving him by less than a week. Greatly mourned, he was buried in the church of Saint Juan Bautista, but the church was destroyed in 1811, and no trace has ever been found of his burial place.