xxxxxGustavus Adolphus (1594-1632), regarded as one of Sweden’s ablest monarchs, established a highly professional army and, having made peace with Denmark in 1613, successfully waged war against the Russians, denying them access to the Baltic. By 1629 he had also driven the Poles out of land bordering the Baltic and made safe his crown. He entered the Thirty Year’s War the following year and won a series of battles against the Catholic League. Within two years he controlled the whole of northern Germany for the Protestant cause, and was dubbed the “Lion of the North”. In November 1632, however, he was killed at the Battle of Lutzen, and the campaign came to an end in 1634. At home he developed a sound, centralised administration, laying the foundations for the modern state of Sweden.

xxxxxBy 1629, following the defeat of Christian IV, king of Denmark and Norway, the Protestants were close to being defeated. In 1630, however, Gustavus Adolphus of Sweden, an ardent Lutheran, entered the war with the hope of gaining control of the Baltic. Within two years he had won a series of battles against the Catholic League and killed their leader Count Graf von Tilly. Dubbed the “Lion of the North”, he took over most of northern Germany for the Protestants, but when the war flared up again he was killed at the Battle of Lutzen in November 1632. Within a year the Swedes were forced to retreat, but in 1635 the conflict took a new turn when France, determined to reduce the power of the Habsburgs, suddenly declared war against Roman Catholic Spain and joined in the conflict. 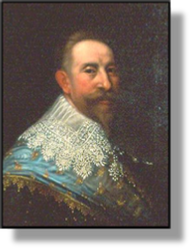 xxxxxAs we have seen, the entry into the war of Christian IV of Denmark and Norway in the Spring of 1625 had raised the hopes of the hard-pressed Protestants in Germany, and had also held out some prospect of a reduction in the power of the Habsburgs. Defeats in the field, however, and the Treaty of Lubeck had put an end to any such hopes and prospects. Then in 1630 Gustavus Adolphus of Sweden (illustrated) entered the war, hoping to succeed where Christian IV had failed. He had good reasons for entering the conflict. Firstly, as an ardent Lutheran, he was more than willing to go to the aid of the North German Protestants. Secondly, he was quite prepared to do the fighting on behalf of France provided he had French support in the form of subsidies. And thirdly, he was anxious to gain complete control of the Baltic region - and waging war made this a possibility. 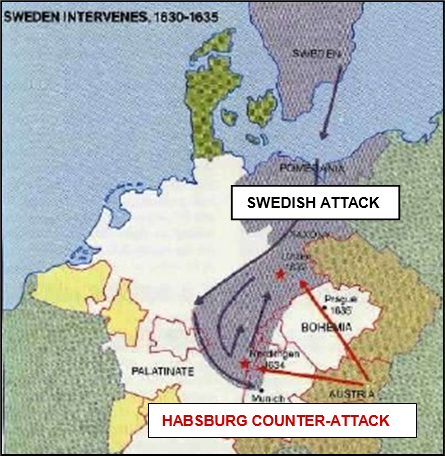 xxxxxGustavus landed his well-trained army on the coast of Pomerania in the summer of 1630, but delayed by wrangling between local princes over the strength of their support, he was unable to go to the defence of Magdeburg then in revolt algainst the Holy Roman Empire. As a result, imperial troops captured the German city in May 1631, massacred its protestant inhabitants - some 20,000 - and virtually destroyed the city by fire - just one example of the many atrocities committed during this particularly cruel series of wars. When, eventually, Gustavus opened his campaign he met with outstanding success against the imperial forces led by Count Graf von Tilly. Hexdefeated the commander of the Catholic League in three encounters - inflicting heavy loses in the last one, the Battle of Breitenfeld, - and then the following year he gained further victories, including the killing of Tilly at the Battle of the River Lech and the capture of Munich. He was now in control of much of northern Europe and, dubbed "the Lion of the North", began to plan the setting up of a permanent Protestant League under his control. 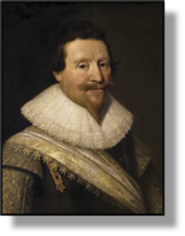 xxxxxInxan attempt to avoid further defeat, Ferdinand II, Holy Roman Emperor (1619-37), recalled Albrecht von Wallenstein, the Duke of Friedland (1583-1634) (illustrated). He formed a new army of mercenaries and invaded Saxony. The Swedish army pursued him and brought him to the Battle of Lutzen. The imperial troops were forced to retreat, but Gustavus Adolphus was killed in the fighting. Hisxsuccessor on the battlefield, Duke Bernhard, then overran Bavaria, but imperial forces attacked Swedish strongholds in Silesia and then won a resounding victory over Bernhard at the Battle of Nordlingen, fought in September 1634. The followingxyear another truce, the Peace of Prague, ended yet another phase of the war with nothing to show for it but a few concessions to the Lutherans of Saxony. But as we shall see, with the unexpected French declaration of war against Roman Catholic Spain in 1635, the Swedes were to play a vital role in the final phase of the conflict.

xxxxxIncidentally, a story is told - probably a true one - about the Bavarian commander Count Graf von Tilly, the brilliant leader of the Catholic League during the first fourteen years of the war. A man who was hardly known for his leniency - he was later dubbed "the butcher of Magdeburg" - Tilly captured the fortress of Rothenburg in 1631 and, doubtless as a peace-offering, was presented with a large flagon of the district's best wine. He then declared that he would spare the town and its inhabitants if one of its citizens could drink the entire amount - almost a gallon - at one gulp. The mayor, one George Nusch, accepted the challenge and won it. The town clock depicts this heroic deed each time it strikes the hour, and the event is commemorated every Whitsuntide by the performance of a play, aptly called Der Meistertrunk - The Master Gulp. It appears that it took the mayor several days to recover! 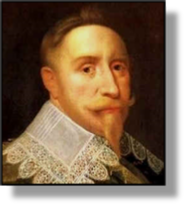 xxxxxGustavus Adolphus (1594-1632) became king of Sweden in 1611 at the age of 16, and inherited a kingdom at war with Denmark, Russia and Poland. He concluded a costly peace with Denmark two years later - having to pay heavily for the return of Sweden's southern provinces - but was then able to wage a successful war against Russia. By 1617 he had gained land that denied Russian access to the Baltic Sea, thus postponing Russia's emergence as a European power until the coming of Peter the Great. He then turned his attention to Sweden's long standing adversary Poland, whose ruler, his cousin Sigismund III, laid claim to the Swedish throne. In a campaign lasting eight years he drove the Polish forces out of land bordering the Baltic Sea, and by 1629 had made safe his crown.

xxxxxNow secure at home, the following year he chose to enter the Thirty Years' War. An ardent Lutheran, he aimed to champion the Protestant cause whilst hoping, at the same time, to secure a firm hold on the Baltic region and take command of the Baltic Sea. Hisxcampaign in Germany, encouraged by the French, was highly successful and earned him the title "Lio 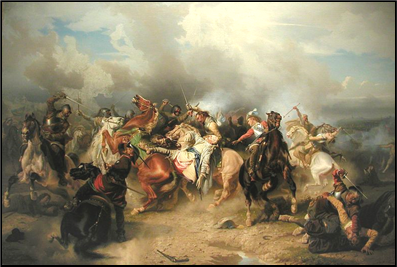 n of the North". Within a year he had gained a victory at the Battle of Breitenfeld - due largely to his efficient artillery and disciplined cavalry - and then he swiftly occupied both Bavaria and Bohemia. Now master of Germany, he contemplated forming a Protestant League under his command. In November 1632, however, taking his army up north, he took on the imperial forces at the Battle of Lutzen (illustrated), south west of Leipzig. His troops won the day, forcing the enemy to retreat, but their king was killed. It would seem that in dense fog he blundered into the enemy's lines and was shot in the back as he tried to escape.

xxxxxGustav Adolphus was one of Sweden's most able monarchs. He proved his worth on the battlefield itself, but he was also responsible for the modernising of his armed forces. He produced a small but highly disciplined army, well paid and equipped with the most advanced musketry and lightweight pieces of artillery. He introduced compulsory service to make up this force, and trained his infantry and cavalry in battle tactics. In view of these wide ranging innovations he has come to be regard as the founder of modern warfare.

xxxxxHe was no less active on the domestic front. Here he put an end to the struggle between crown and nobility, developed a sound, centralised administration, and overhauled the educational system, making provision for adults as well for children. He not only laid the foundations of the modern, nation state of Sweden, but also gave it the strength required to make it into a major European power. He was succeeded by his daughter, Christina.