The Peacock Throne, and 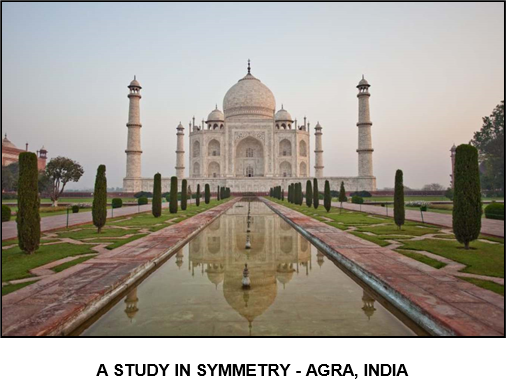 xxxxxThe Taj Mahal, designed by two Iranian architects, was built alongside the River Jumna in the city of Agra, northern India. It was commissioned by Jahan as a mausoleum for the favourite of his three queens, Mumtaz Mahal, who was also known by the title Taj Mahal, meaning "the crown of palaces". Work began in 1632, shortly after her death from childbirth, and, employing some 20,000 workers a day, took 16 years to complete. Designed to represent the throne of God in paradise, it is the greatest masterpiece of Indo-Muslim architecture and, without doubt, one of most beautiful, awe-inspiring buildings in the world.

xxxxxThis monumental edifice and the planned gardens in front of it provide a splendid study in symmetry. The mausoleum, rising 187ft tall, has a magnificent marble dome, surrounded by four smaller domes, and slender minarets mark the four outer corners of the building. The facade of the sepulchre is in white marble inlaid with semi-precious stones, and this whole elegant, towering edifice - delicate in design but firm in line - is sharply reflected in the garden pools which stretch before it. The interior octagonal chamber is also adorned with semi-precious stones, the walls lit by light coming through high mounted screens of carved marble.

xxxxxShah Jahan also planned a twin to the Taj Mahal in order to provide a mausoleum for himself. It was to be built in black marble and situated opposite his wife's sepulchre. However, when his son seized the throne in 1658, he spent the rest of his life as a prisoner in Agra Fort. His tomb, which lies next to that of his wife, was clearly not envisaged in the original design.

xxxxxThe Taj Mahal was built by Shah Jahan as a mausoleum for his favourite queen. Named after her title (“the crown of palaces”), it was begun in 1632 and took sixteen years to complete. Representing the throne of God in paradise, it is one of the most beautiful buildings in the world. It has a magnificent marble dome, and slender minarets mark each outer corner. The façade and interior is in white marble inlaid with semi-precious stones, and a long pool, stretching in front of the building, mirrors its remarkable symmetry.

xxxxxThe original Peacock Throne was built for Shah Jahan. Said to be one of the most magnificent thrones ever built, its back was in the form of two open peacock tails, enamelled, gilded and inset with rubies, diamonds and other precious stones. It was placed high on a dais, supported by feet made of gold, and reached by a number of silver steps. (The picture gives some idea of the original.)

xxxxxIt took pride of place in the Hall of Private Audience in the Red Fort until it was seized by the Iranians when they captured and plundered Delhi in 1739. Their leader, Nadir Shah then had a divan made in the same style before taking the two thrones back to Iran. Unfortunately, both were captured by the Kurds during a raid and, so it would seem, were dismantled for their precious stones and metals. Various reproductions were later made and served as symbols of the Iranian monarchy. The most recent one was made in 1926, and was used for the coronation in 1941 of the last Shah of Persia, who was driven from power in January 1979.

xxxxxThe original Peacock Throne, noted for its feet of gold and its back designed as two open peacock tails, encrusted with precious stones, was built for Shah Jahan. It was seized by the Iranians in 1739, led by Nadir Shah, but was later captured by the Kurds and dismantled for its precious stones and metal. Later, various copies were made to serve as symbols of the Iranian monarchy until its collapse in 1979.

xxxxxShah Jahan was the grandson of the great Mughal Emperor Akbar. His grandfather died in 1605 (J1) and Jahan eventually seized the throne in 1627. Able and ambitious, he spent much time expanding his empire into the Deccan. In 1653, however, he lost Kandahar to the Persians, and five years later, toppled from power by his son Aurangzeb (1669 C2), was imprisoned for the rest of his life. His reign is noted above all for the magnificence of his court and the Indo-Muslim mosques, palaces and tombs he built, including the Red Fort at Delhi and the Taj Mahal at Agra, begun in 1632.

xxxxxAs we have seen, the greatest of all Mughal Emperors, Akbar, died in 1605 (J1). At that time the Empire had a population of some 80 million, and extended from Afghanistan to the Bay of Bengal and from the Himalayas to the northern Deccan. His control over such a vast area of diverse lands is a fitting measure of his extraordinary powers of organisation.

xxxxxHe was succeeded by his son Jahangir, and he managed to keep the empire on a fairly even keel during the first six years of his reign. In 1611, however, he married and came under the influence of his Iranian wife, the domineering Nur Jahan. She, plus members of her family and Jahangir's third son, Prince Khurram, virtually ruled the country from then on. In 1622 and 1625 Khurram made unsuccessful attempts to seize the throne, but with the death of his father in 1627 he at last came to power. He hastened to Agra and, having disposed of all his male relatives, became  Emperor  with  the  title  of Shah Jahan, the Great Mughal of India (illustrated).

xxxxxAn able and ambitious leader, he spent much of his reign extending his authority further south in the Deccan plateau. By 1636 he had annexed Ahmadnagar, and made Bijapur and Golconda tributaries. Under his rule the dynasty reached the height of its power. However, in 1653 he suffered a setback in the north west with the loss of Kandahar to the Persians, and five years later, taken seriously ill, was toppled from power by his son,  Aurangzeb,  and imprisoned until his death in 1666. As we shall see (1669 C2), Aurangzeb over-stretched the empire's power and paid the penalty. 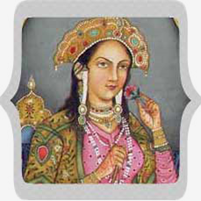 xxxxxLike his father before him, Jahan presided over a magnificent court. We are told that he possessed a vast collection of jewels and that this might have contained the famous Koh-i-noor, one of the most beautiful and largest diamonds ever discovered. But his reign is noted above all for its exquisite Indo-Muslim mosques, tombs and palaces. As the greatest patron of Mughal art and architecture, he built the new capital of Delhi with its Red Fort - a vast palace-fortress containing the Halls of public and private audience - , numerous marble palaces, and the Jami Masjid, one of the finest mosques in India. And he was responsible for two of the world's most beautiful buildings, the Taj Mahal (a mausoleum for his third wife Mumtaz Mahal - here illustrated) and the Pearl Mosque, both at Agra. In this city he also built two great mosques, replaced a number of red-sandstone constructions with marble, and laid out imposing gardens and water features.

xxxxxIt is likely that amongst Shah Jahan’s treasures was the famous Koh-i-noor diamond. Weighing 186 carats and discovered in 1304, it seems that it eventually fell into the hands of the Iranian leader Nadir Shah. After his assassination in 1747, it was acquired by Ranjit Singh - who extended the Sikh Kingdom into the Punjab in 1801 - and then came into the possession of the British when they annexed the Punjab in 1849. Cut to give it more lustre, it was eventually placed on the cross which is mounted on the top of Queen Victoria’s state crown.

xxxxxIt is possible, too, that among the vast amount of booty taken back to Iran by Nadir Shah was the famous Koh-i-noor diamond, weighing some 186 carats when discovered in 1304. One theory is that this "mountain of light" was given to the son of Babur, the founder of the Mughal dynasty in India, by the Rajah of Gwalior following the Battle of Panipat in 1525, and retained by his successors. Others claim that it was discovered in the Kollur mine of the River Krishna and presented directly to Shah Jahan in 1656. Yetxanother suggestion is that Nadir Shah stole the Great Mughal diamond, a huge 787-carat rough stone discovered in the Golconda mines in 1650, and that it was from this that the Koh-i-noor was cut.

xxxxxAfterxNadir Shah's assassination in 1747, it appears that the diamond eventually fell into the hands of Ranjit Singh (1780-1839) - the Sikh leader who extended his kingdom into the Punjab in 1801 - and was "acquired" by the British when they annexed the Punjab in 1849. It was presented to Queen Victoria the following year to mark the 250th anniversary of the founding of the East India Company. It was put on display at the Crystal Palace Great Exhibition of 1851, but visitors were disappointed by its lack of lustre. After being cut to a weight of 105.6 carats, it was then placed in the centre of the Maltese cross on the top of the queen's state crown, and was worn by Queen Elizabeth, consort of George VI, at her coronation in 1937.

xxxxxLater,xbut conveniently mentioned here, was the coming of the so-called “Pitt Diamond”. It was in 1702, in the reign of Queen Anne, that the President of Madras, Thomas Pitt (grandfather of the prime minister Pitt the Elder) bought a large uncut diamond from an Indian merchant for the equivalent of 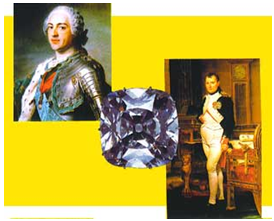 £20,400. He sent it to England where it was cut into a 140 carat gem of immense beauty and brilliance. In 1717 he sold it to the French Regent, the Duke of Orleans, for £135,000 (some £18 million in present day terms!) and, known as Le Régent, it eventually found its way into the French royal treasury at The Louvre in 1887. In the meantime it was set in the crowns of a number of French kings, including that of the ill-fated Louis XVI; had adorned the sword of General Napoleon Bonaparte; and been set in the imperial crown of Napoleon III.