xxxxxIn 1641, following the publication of his treatise Concerning Movement, the Italian scientist Evangelista Torricelli became secretary to the ageing Galileo, and the following year succeeded him as professor of mathematics at the Florentine Academy. It was here in 1643 that he became the first man to create a sustained vacuum by inverting a tube of mercury into a bowl containing mercury. The varying size of the space which appeared at the top of the tube - caused by atmospheric pressure - led to his invention of the barometer. He later developed what came to be known as Torricelli’s theorem. This states that the flow of a liquid through an opening is proportional to the square root of the height of the liquid. He also made a contribution to the study of pure mathematics - particularly in geometry. 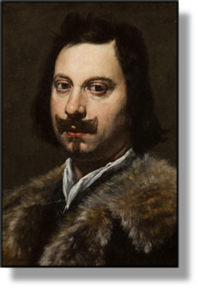 xxxxxTorricelli was born in Faenza, Romagna, and was educated at the Sapienza College in Rome. Having read and been inspired by the works of Galileo, he wrote a treatise on motion entitled Concerning Movement, and this work so impressed the ageing astronomer that in 1641 he invited him to Florence. Here he was Galileo's secretary for the last three months of the astronomer's life and, when he died in 1642, he succeeded him as professor of mathematics at the Florentine Academy. 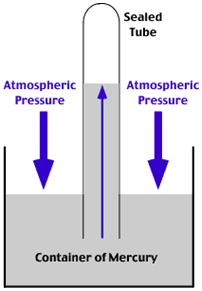 xxxxxIn his first years at the Academy he showed a particular interest in atmospheric pressure and in 1643, working on a suggestion once made to him by Galileo, he filled a long glass tube with mercury and inverted the tube in a bowl containing mercury. He observed that some of the mercury flowed out, leaving a space at the top of the tube. He had become the first man to create a sustained vacuum. He then further noticed that the space varied in size from day to day, and he came to the conclusion that variations in the height of the column of mercury were due to changes in atmospheric pressure upon the mercury in the bowl. He had invented the barometer! It was not long before this apparatus was put to good use, notably in the field of meteorology. By the end of the century records of atmospheric conditions were being maintained in a number of countries in order to report more accurately on weather conditions. 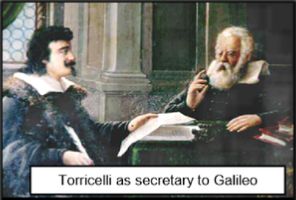 xxxxxThe use of mercury was the deciding breakthrough. Because of its high density the column was very much reduced in height. A mercury column of say 760 millimetres, for example, would require a corresponding column of water rising to a height of about 10 metres! Furthermore, mercury had very little vapour pressure, whereas the vapour from water would result in an error of 2 per cent at 15 degrees centigrade.

xxxxxFollowing the success of these experiments, he went on to deduce what came to be known as Torricelli's theorem. This states that the flow of a liquid through an opening is proportional to the square root of the height of the liquid. And for many years, the unit of measurement used to indicate atmospheric density and barometric pressure was known as a "torr", named after the inventor.

xxxxxWhile in Florence Torricelli also gained a reputation for the making of optical instruments and the construction of microscopes and telescopes - all designed to an incredible degree of precision - and he made, too, a marked contribution to the study of pure mathematics. His work in geometry, for example, Geometric Works, assisted in the eventual development of integral calculus.

xxxxxThe findings of the Belgian scientist Jan Baptista van Helmont (1579-1644) were published a year after Torricelli’s death. As a research chemist he identified carbon monoxide, carbon dioxide, nitrous oxide and methane, and he was the first to use the term “gas”. And to him is owed the standard temperature range, based on the melting point of ice and the boiling point of water. In the field of medicine he showed that acid was present in the stomach and acted as the digestive agent. Today he is regarded as the greatest chemist before the coming of the brilliant French scientist Lavoisier in the 18th century. 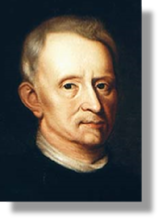 xxxxxAnother significant scientist at this time was the Belgian Jan Baptista van Helmont (1579-1644). He died just three years before the death of Torricelli, but his findings were published in a volume of his complete works in 1648. After studying at Louvain University and teaching there for two years, he studied in France and Italy before returning to his estate at Vilvorde. It is here that he did most of his work, exploring nature in his own laboratory and gaining a reputation for the thoroughness of his experiments.

xxxxxHe scored a number of "firsts" as a research chemist. He has the distinction of being the first scientist to realise that there were gases other than atmospheric air - proving his point by identifying carbon monoxide, carbon dioxide, nitrous oxide and methane - and he was the first to use the term "gas", from the Greek word chaos meaning "formless void". He was also the first to determine the standard temperature range, based on the melting point of ice and the boiling point of water, and the first to employ the word "saturation" to signify the combination of an acid and a base.

xxxxxFurthermore, in support of his belief that all matter was composed of water and air, he grew a willow tree in a measured quantity of earth and, feeding it only water, showed that the tree's increased weight did not come from the soil - though this of course was only a partial explanation. And he also went some way to proving the indestructibility of matter by demonstrating that metals dissolved in acid could be recovered. Later, building on the reforms of the Swiss physician Paracelsus, he put his knowledge of chemistry to good use in the field of medicine. In studying digestion and nutrition, he showed that acid was present in the stomach and acted as the digestive agent.

xxxxxSuch was the number of his discoveries and the value of his findings, that Helmont has been described as the greatest chemist before the coming of the brilliant French scientist Antoine-Laurent Lavoisier, the father of modern chemistry, in the 18th century.

xxxxxIncidentally, an old painting came to light in 2003. It was first thought to be a portrait of the 17th century English scientist and inventor Robert Hooke, but on further investigation it was established that it was, in fact, a portrait of Jan Baptista van Helmont – illustrated above.