xxxxxAs we have seen, the king was on the run following Parliament’s victory at the Battle of Naseby in 1645. He eventually gave himself up to the Scots, but they handed him over to Parliament and then in June 1647 he was seized by the army - a new political force. He managed to escape, but was recaptured and imprisoned on the Isle of Wight. Here he struck a bargain with the Scots, and in May 1648 they invaded England on his behalf. However, in a series of running fights they were soundly defeated by the New Model Army at the Battle of Preston. Now there were strong demands in the army, and from some members of parliament, that the king should be put on trial. As we shall see, this came about in January 1649.

Medallion: struck to commemorate Cromwell and the Battle of Preston in 1648 - Royal Mint, London. Humpty Dumpty: from http://es.doblaje.wiki.com.

xxxxxAs we have seen, following Parliament's victory at the Battle of Naseby in June 1645, the king was virtually on the run. He made for Leicester but this town was soon taken, and he had not long arrived in Oxford before the city was surrounded by the New Model Army. He managed to escape and gave himself up to the Scots, but they handed him over to Parliament before leaving for home in January 1647. Then in June he was snatched away by the army - a new force in English politics - and was eventually taken to Hampton Court. He escaped yet a second time, but his plans to make it to France went awry, and he ended up on the Isle of Wight, virtually a prisoner in Carisbrooke Castle. 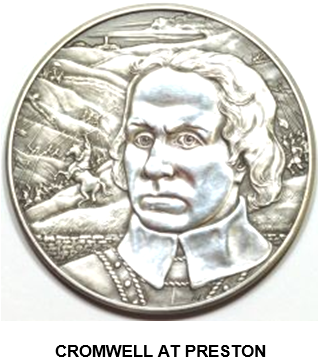 xxxxxIt was from here that he conducted a series of negotiations with his adversaries - Parliament, the army and the Scots - in the desperate hope of finding support for the reopening of the Royalist cause. In December 1647 he came to a secret understanding with the Scots. In return for their help to restore him to the throne, he promised to make Presbyterianism the official religion not only in Scotland but also in England. Hopeful that the Scottish intervention would bring his release, he then refused terms put forward by Parliament and tried, unsuccessfully, to escape from his detention.

xxxxxIn May 1648 a Scottish army under the Duke of Hamilton invaded England and advanced as far south as Lancashire. Here, however, it was met by elements of the New Model Army, led by Cromwell, and soundly defeated at the Battle of Preston in what amounted to a series of running fights. Royalist support then fell away or was quickly suppressed, as in the case of Colchester, where General Fairfax stormed the town and executed the ringleaders. Hamilton was captured and executed, and there were strong demands from the army for the king - "the grand author of our troubles" - to be put on trial for "that blood he hath shed and mischief he hath done". This view was shared by many in Parliament. He was taken first to Hurst Castle in Hampshire and then to Windsor Castle. As we shall see, in January 1649 a special high court was set up to conduct the trial of Charles I. 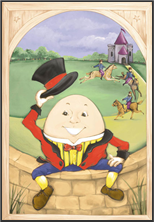 xxxxxIncidentally, it was in 1648 that the Royalists fought hard to hold on to Colchester, captured in June of that year. According to one story, they were assisted by Humpty Dumpty of nursery rhyme fame, a powerful cannon which they had installed high up on the church of St. Mary-at-the-Walls. After a siege lasting more than two months, however, the batteries of the New Model Army brought down the church tower and Humpty Dumpty “had a great fall”. Attempts were made to restore the cannon, but “all the king’s horses and all the king’s men couldn’t put Humpty together again”, and the battle was lost.