xxxxxThe causes of the English Civil War date back many years, centred around the breakdown between king and parliament over constitutional and religious issues. The conflict was eventually sparked off, however, by the insistence of both James I and then Charles I on “The Divine Right of Kings”. As a result of this doctrine, Charles ruled alone for eleven years, but the Bishops’ Wars with Scotland forced him to seek funds from parliament. The Long Parliament attempted to reassert its authority, but became divided over the extent of its powers. The final straw came in January 1642 when, facing a Catholic rebellion in Ireland, Parliament attempted to take control of the king’s army. Charles marched into Parliament to arrest five of its leaders. As a result, many members took up arms against the king, and he raised his standard at Nottingham in August 1642. Two months later came the Battle of Edgehill, the first clash between the Royalists (the “Cavaliers”) and the Parliamentarians (the “Roundheads”) in the English Civil War. 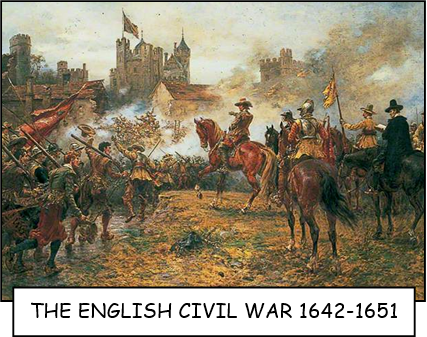 xxxxxThe long-term causes of the English civil war can doubtless be traced back for a century or more, involving above all the gradual breakdown between King and commoner over constitutional and religious issues, but the events which eventually sparked off the conflict were but a few years in the making.  Like his father before him, Charles I firmly believed that his right to rule came directly from God. This doctrine, "The Divine Right of Kings", (later to be exemplified by the French king, Louis XIV), had brought James I into bitter conflict with Parliament on a number of occasions. He had warned his son of the dangers posed by this assembly, and these dangers were not long in coming.

xxxxxAs we have seen, from the very start of his reign, a stubborn and high-handed Charles had clashed with Parliament  over  its  attempts  to  share  in  government.  As a consequence  he  had dissolved parliament and ruled alone during what his opponents termed “The Eleven Years' Tyranny”. During this period he managed reasonably well, despite some fierce opposition to his methods of taxation. However, in 1637 the king's troubles took on a second dimension, a dispute over religion, and it was this which was to put an end to his personal rule. 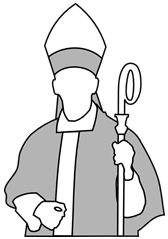 xxxxxSince the English Reformation, and particularly in the reigns of Elizabeth I and James I, the Puritans had long argued that the religious reforms had not gone far enough to rid the country of all vestige of the Roman Catholic Church. A particularly burning question was the continued existence of bishops in the government of the church (episcopacy). This smacked of Roman Catholicism, and it was this very issue, in fact, which, in 1637, proved one of the major causes of the English civil war. Attempting in that year to impose the English liturgy on the Scottish church - including the office of bishop – Charles I stirred up a widespread rebellion in Scotland and soon found himself fighting the Presbyterian Scots in what came to be known as The Bishops' Wars.

xxxxxIt was the cost of these conflicts that forced him back into the hands of Parliament. In 1640, faced with the outbreak of a Scottish rebellion (the first of the Bishops' Wars), and seriously short of ready cash, he was obliged to recall parliament. The Short Parliament flatly refused to grant him aid and was summarily dismissed, but in November, now obliged to counter a Scottish invasion (in the second of the Bishops' Wars), he had no alternative but to convene another assembly.

xxxxxKnown in history as the Long Parliament, its members now made every effort to reassert their authority, seeking and eventually obtaining the execution of two of the king's closest advisors, and demanding reforms in exchange for financial aid. But its members then became bitterly divided over a number of issues, not least over the extent to which the powers of the crown should be restricted. Sides were taken and lines were drawn as to which body was to govern the country, Parliament or the Crown. Then a serious Catholic rebellion in Ireland raised the thorny question as to which body should control the army in such an event. The final act came in January 1642 when Charles, determined to maintain his control of the army, and anxious to put an end to the interference of Parliament in the affairs of his state, marched into the House of Commons with an armed escort to arrest five of its leaders. They had already fled, but the bitter political quarrel between Crown and Parliament now boiled over; war became inevitable and it was destined to tear the country apart. The majority of the Lords and some members of the Commons took the side of the King. 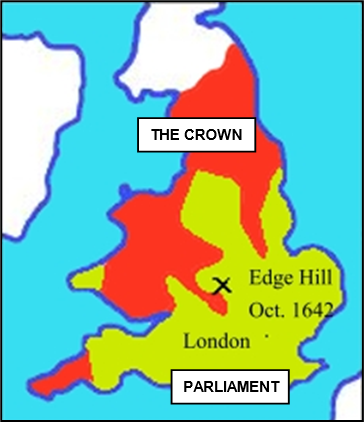 xxxxxIn 1642 the king denounced Parliament and its soldiers as traitors, and in August raised the royal standard at Nottingham, bearing the words "Give Caesar his Due". Two months later the first major battle took place at Edgehill between the “Cavaliers”, followers of the king, and Parliament's "Roundheads".

xxxxxThe Battle of Edgehill was fought on high ground a few miles north-west of Banbury. Both sides numbered about 14,000. The king led the Royalist forces, and the commander of the Roundheads was the Earl of Essex. The king's cavalry won the first encounter, but when in pursuit they became dispersed and suffered heavy losses. The result thus proved inconclusive. Both sides claimed a victory, but Essex was the first to withdraw his troops from the battlefield. As we shall see, by the time of the next major battle, fought on Marston Moor in 1644, both sides had determined their major areas of support, with the royalist forces (the Cavaliers) mainly in the north and west, and the Parliamentary forces (the Roundheads) holding London and much of the south-east.

xxxxxIncidentally, the term "Cavaliers" was a nickname and referred to all Royalist forces, not just mounted troops. The name "Roundheads" was probably derived from the fact that the Puritans tended to keep their hair short, but it might also have referred to the shape of the helmet used by some of their soldiers - though this helmet did not really come into general use until the formation of the New Model Army in 1645.