xxxxxFollowing the death of Cardinal Richelieu in 1642, Cardinal Mazarin became the chief minister in France. By the end of the Thirty Years’ War in 1648 the country was faced with spiralling taxes and acute food shortages. The parlement in Paris called for reforms, but Mazarin took a firm line and arrested two of the ring leaders. This sparked off the first Fronde rebellion, based in Paris but with rumblings of discontent in the provinces. Nobility, bourgeoisie and workers took to the streets, protesting against heavy taxes and the absolute rule of the monarch. Eventually the regent for Louis XIV, Queen Anne of Austria, agreed to concessions, but the peace was short lived. As we shall see, in 1650 there was a second Fronde uprising, this time led by dissident nobles in the south who were anxious to reduce the Crown’s grip on government. Known as the Princely Fronde, it was ruthlessly crushed, as we shall see, by 1653 (CW). 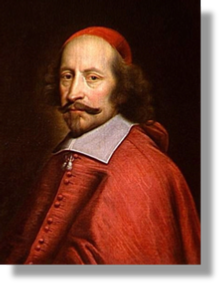 xxxxxFollowingxthe death of Cardinal Richelieu in 1642, the post of chief minister was taken by Cardinal Jules Mazarin (1602-1661) and, together with the regent, Queen Anne of Austria, he administered the country during the minority of Louis XIV. As "foreigners", neither the Austrian-born Queen nor her Italian-born advisor was popular. In 1648 Mazarin (illustrated) successfully concluded the Thirty Years War, but in the same year his heavy-handed, insensitive policy at home led to the outbreak of two civil wars, known as The Frondes.

xxxxxIn the aftermath of the Thirty Years' War, there was much discontent in the country over spiralling taxes and acute food shortages. In the spring of 1648, the Parlement of Paris - the highest court in the land - refused to approve further increases in taxation, and claimed the right to modify certain royal decrees. In June and July it produced 27 articles for reform, including a reduction in taxation, an end to arbitrary imprisonment, and the withdrawal of Crown officials (Intendants) from provincial government. With the war with Spain still in progress, Mazarin reluctantly agreed to many of these reforms, but in August, with news of a victory over the Spanish, he took a harder line and ordered the arrest of two of the parlementary ring leaders. 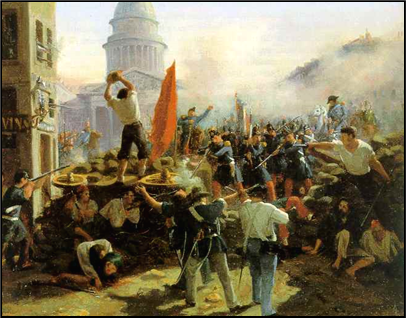 xxxxxThis action triggered off the first rebellion, sometimes called the “the Fronde Parlementaire" and centred in Paris. Realising his mistake, Mazarin released the two leaders, but it was too late. Judges of parlement joined with nobility, bourgeoisie and workers of the city in a violent protest against heavy taxes and the absolute nature of crown rule - so effectively put into place by Richelieu during his long years in office. The Queen Regent, her son, nine-year old Louis, and Mazarin made good their escape from the capital. Serious street rioting broke out in August - known as the Days of the Barricades (illustrated) - and government administration came to a standstill. A siege of the city was put in place over the winter months by the royalist commander Prince Condé, but the revolt continued. This fact, together with the rumblings of revolt in the provinces and the demands of the war with Spain, eventually forced the regent to make concessions.

xxxxxByxthe Peace of Rueil, ratified on April Fools' Day in 1649 (a portent for the future!), new taxes which were not yet in force were abolished, arbitrary detention was outlawed, and some of the Intendants were withdrawn from provincial authorities. In addition, an amnesty was granted to the rebels. However, as we shall see, the first revolt was no sooner over than the second civil war of the Fronde erupted in 1650, this time led by dissident nobles in the south and specifically aimed at breaking the Crown's stranglehold on all aspects of government. Styled the Princely Fronde (or the Fronde des N

xxxxxIncidentally, the word "Fronde" was the name given to a sling (or catapult) used in a children's game at this time. The game was played in the streets of Paris despite being banned by the local authority. It was doubtless used by the rebels as a term of defiance against central government.