xxxxxAs we have seen, following the defeat of the Scots at the Battle of Preston in 1648, the army emerged as a political force, calling for the king to be put on trial. Some in the army, like the Levellers, even favoured a republic. In December 1648 the army forcibly “purged” the Commons of members opposed to it, leaving the “Rump” to set up a court to try the king. Charles, accused of treason, refused to acknowledge this court, but it found him guilty nonetheless, and he was beheaded on the 30th January 1649.

xxxxxAs we have seen, following the defeat of the Scots at the Battle of Preston in 1648, it was the army not Parliament that called for the trial of the king. Ever since the decisive defeat of the Royalists at the Battle of Naseby in 1645, when the military emergency appeared to be over, Parliament had been thrown into confusion. The prospect of victory reopened all the old divisions, both religious and political. Amongst its members there was a large group - led by Denzil Holles - who called for the disbandment of the army, the speedy settlement of disputes over church matters, and the raising of a militia. Hardly surprising that the army saw such a proposal as non-negotiable. It was then that they seized hold of the king and, in August 1647, marched upon London. What had been a civil war now turned into a revolution. 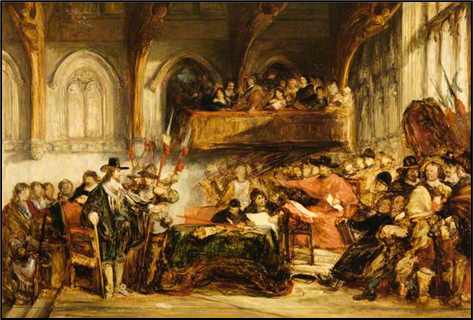 xxxxxManyxin the army did, in fact, lend support to a popular democratic party at this time. Its members, known as the Levellers and led by John Lilburne, advocated the establishment of a republic and, by means of an "Agreement of the People", a reformed parliament elected on the basis of a broad franchise (hence the name "Levellers"). But following the king's secret agreement with the Scots, and their invasion of northern England, the attitude of the army hardened towards a Crown determined to regain power at any price, and a Parliament which was weak and divided. When Parliament attempted yet another compromise via the Treaty of Newport, the army intervened. In December 1648 troops under the command of Colonel Thomas Pride literally "purged" the House of Commons (known as Pride's Purge). Of the Long Parliament - still officially in session - 186 members were kept out and 45 were arrested, leaving a "Rump" of about 70 active members to do the Army's bidding. The purge was, in fact, a compromise. Parliament remained in being so, in theory at least, military rule had been averted!

xxxxxThe army could now push on with the King's trial and execution. Members of the Rump were required to set up a high court of justice in Westminster Hall and, in the name of the people of England, try the king on a charge of treason. The court was composed of army officers, members of Parliament and civilians, and, in addition to high treason, the king was charged with "other crimes against the realm of England". By taking for himself unlimited power he had overthrown the rights and liberties of the people. The Civil War, caused by his “wicked design”, had made him an “implacable enemy to the Commonwealth of England”. 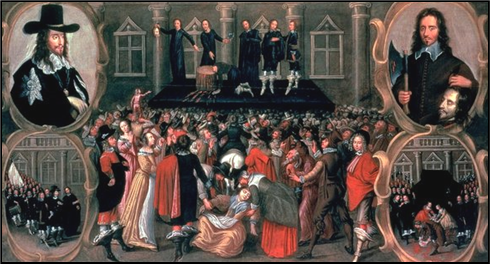 xxxxxCharles refused to plead to the charges made against him, arguing that no court in the land could be of a higher status than that of the monarch. Throughout the trial he maintained a dignified air, arguing that he had simply acted in defence of the "liberty of the people of England". He was sentenced to death on 27th January 1649 for being a traitor, tyrant, murderer and public enemy. Fifty-nine men, including Cromwell and the presiding judge, signed the warrant of execution, and three days later Charles was beheaded on a scaffold erected outside the banqueting hall in Whitehall. It is said that he went bravely to his death, and one witness recorded that at the moment of execution "such a groan went up as I had never before heard". He was buried in St. George's Chapel, Windsor, a week later.

xxxxxIncidentally, the judge at the trial, one John Bradshaw, wore a black hat reinforced with iron for fear of assassination, and for his execution the king wore two shirts so that he did not shiver with the cold and give the impression that he was afraid. ……

xxxxx……   We are told that the English diarist Samuel Pepys took a day off from school to witness the beheading of the king.