xxxxxThe discovery concerning the circulation of the blood in the human body, made by the English physician William Harvey, was published in 1628, though he had advanced the theory as early as 1616. Only the part played by the capillaries (tiny blood vessels) escaped him, but this was explained by the Italian anatomist Marcello Malpighi some thirty years later in 1661 (C2). Harvey studied for five years under the celebrated Italian anatomist Hieronymus Fabricius, and served as physician to James I and then Charles I, whom he accompanied during the English Civil War. The execution of the king in 1649 greatly distressed him and, viewed with suspicion by the Commonwealth government, he did very little work after that date.

xxxxxThe discovery concerning the circulation of the blood in the human body, made by the English physician William Harvey and formally set out by him in his Anatomical Essay on the Motion of the Heart and Blood in Animals, refuted the theories put forward on this subject by the Greco-Roman physician Galen - theories that had remained virtually unquestioned for some 1,400 years.

xxxxxHe published his treatise - just 52 pages long - in 1628, but as early as 1616, while lecturing at St. Bartholomew's Hospital, London, he had put forward the idea that the "pump-like" heart propelled the blood around the body in a circular course. His findings were based on a careful examination of the heart and blood vessels of a wide range of animals, and also included a series of human dissections. These experiments convinced him that the blood in the veins flowed only towards the heart, and that blood, pumped by the heart, actually circulated around the body, passing from the right to the left side of the heart via the lungs. This account of the mechanism governing the circulatory system proved totally accurate. Only in one detail - the part played within this system by the capillaries - was his description lacking. He saw the need for these tiny blood vessels, but without a microscope he was unable to confirm their existence. This was achieved by the Italian anatomist Marcello Malpighi some 30 years later in 1661(C2). 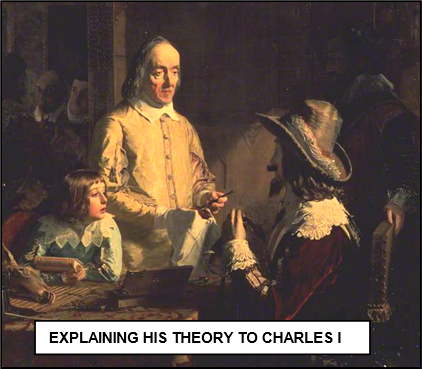 xxxxxThe English physician William Harvey was born in Folkestone, Kent. After attending King's College, Canterbury, and Cambridge University, he went to Padua, Italy, where he studied for five years under the celebrated Italian anatomist Hieronymus Fabricius. On his return to England in 1602, he set up a practice in London, and soon afterwards was appointed physician to St. Bartholomew's Hospital, a post he held for over 30 years. He was elected a fellow of the College of Physicians in 1607 and served as court physician to James I, whom he attended during his last illness. On the death of James, he was retained by Charles I and they became close friends. He went with the king on state visits and, during the Civil War, accompanied him on his travels throughout the country, and was present at the Battle of Edgehill in 1642. However, following the defeat of the Royalist forces at Oxford and the king's detention by the Parliamentary forces, he was not allowed to accompany him to Carisbrooke Castle on the Isle of Wight. The king's execution in 1649 greatly distressed him, and from then on he was viewed with suspicion by Cromwell's régime and took on little new work. He was elected president of the Royal College of Physicians in 1654, but he declined the appointment, preferring to spend his last years quietly. He probably died at his brother's house at Roehampton, and he was buried in the family vault at Hempstead, a village in Essex. In 1883 his remains were removed and placed in a marble sarcophagus in the Harvey chapel within the church

xxxxxAs one might expect, his findings were not accepted by all his contemporaries and, initially, he came in for some severe criticism, but his book was published widely, and he soon became famous throughout Europe for his pioneer work. Apart from his major research project, he also wrote Essays on the Generation of Animals, a treatise which made a special study of the development of chick and deer embryos, and thus contributed to the founding of embryology as a separate branch of medicine.

xxxxxLike a number of physicians before him, Harvey played a major part in refuting some of the theories which Galen had put forward in the 2nd century and which had survived for so long in the primitive medical practices of both ancient and medieval times. His conclusive demonstration on the true nature of the circulation of blood finally put an end to Galen's vague explanation, based on the assumption that the blood in the veins was formed in the liver, the heart was a source of heat, the lungs provided a cooling process, and blood ebbed and flowed through the body like the movement of the tides.

xxxxxBut in arriving at his conclusions, Harvey doubtless owed much of his success to his master Fabricius, not only for the firsthand data he obtained from him on the construction of veins, but also for the analytical method of research he learnt by his tutor's example. At times, others came close to unravelling the complicated mechanism which governed the movement of the blood - like the Italian physicians Matteo Realdo Colombo (c1516-1559) and Andrea Cesalpino (1519-1603), and the Spaniard Michael Servetus (1511-1553) - but it was Harvey who, by his detailed and painstaking observation, succeeded in co-ordinating the various components and completing the system.