xxxxxThe Dutchman Rembrandt was one of Europe’s greatest artists. He went to live in Amsterdam in 1631, and established his reputation with his The Anatomy Lesson of Dr. Tulp, a work remarkable for its original composition and its dramatic use of light and shade. He was soon the city’s leading and wealthiest portrait artist. However, the death of his mother and wife in the early 1640s brought about a change of mood in his work. He turned more to religious paintings and landscapes. This greatly reduced his income, and he was declared bankrupt in 1656. Over 600 paintings are attributed to him, most of them portraits or biblical studies, together with hundreds of brilliant etchings and drawings. A superb technician, his religious works were deeply moving, and his portraits were penetrating studies. And few have surpassed his highly effective use of light, to be seen especially in his masterpiece of 1642, The Night Watch. His biblical works included The Sacrifice of Isaac, The Blinding of Sampson and Christ at Emmaus, and his drawing of The Sleeping Woman is a remarkable piece of work. Of his portraiture - which included some 60 self portraits - perhaps the portrait of his friend Jan Six deserves special mention. 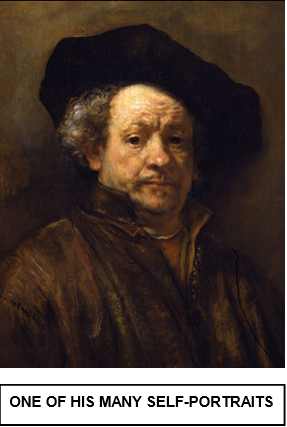 xxxxxRembrandt Harmenszoon van Rijn, to give him his full name, was Holland's most famous painter, the dominating figure of the Golden Age of Dutch painting,  and one of Europe's greatest artists. In 1620 he studied at Leiden University for a short while and then spent three years training under a local artist before visiting Amsterdam. There he spent six months in the workshop of the leading painter Pieter Lastman before returning to Leiden and setting up his own studio, often working with his friend and collaborator Jan Lievens.

xxxxxThese early years in Leiden were highly successful but, aiming for wider recognition, he moved to Amsterdam in 1631, where he could be sure of more lucrative commissions. It was a wise move. He quickly made his name and a very comfortable living by painting portraits of wealthy merchants and other notables of the city. His first major work, and one which established his reputation as an outstanding portrait artist, was The Anatomy Lesson of Dr. Tulp of 1632 (illustrated below), a work noted for the brilliant and original composition of the figures, and for its dramatic use of light and shade - the indirect influence of the Italian painter Caravaggio. Within a few years Rembrandt was the city's leading and busiest portraitist, due to his exceptional talent and the support of influential patrons like the statesman Constantijn Huygens. Such was his success that in 1633 he was commissioned by Prince Frederick Henry of Orange to provide two scenes depicting the passion of Christ. His Raising of the Cross and Descent from the Cross were well received. In their format they owed much to the great altarpieces produced on the same subjects by the Flemish painter Rubens, and doubtless studied by Rembrandt through drawings or engravings. 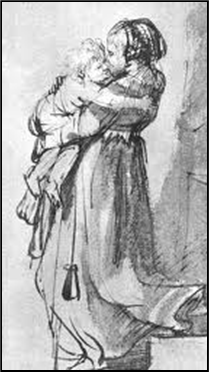 xxxxxIn 1634 he married Saskia van Uylenburgh, the daughter of a local burgomaster, and this enhanced his career. (The drawing on the right is almost certainly Saskia carrying one of their children). It was a happy marriage - despite the infant deaths of three of their four children - and for the next six years a constant flow of commissions brought him considerable wealth and a thriving workshop. It was during this period in particular that he was able to indulge in his passion for collecting items that took his fancy, like pieces of armour and old costumes, as well as paintings, drawings and engravings. But the early 1640s witnessed a change in his fortunes. The death of his mother in 1640 and that of his wife two years later profoundly affected his mood and his work. He all but abandoned his formal portraiture - much of the work being snapped up by his former pupils - and those portraits he did produce tended to be sombre in tone. He now returned to religious themes, portraying biblical stories as in his earlier days, and he gave more time over to landscapes, many of them produced as etchings. 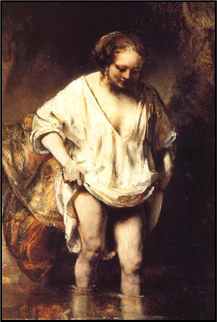 xxxxxBut religious works and landscapes were by no means as lucrative as portraiture. He soon found himself in financial difficulties, due in part to his own extravagance. Furthermore, in 1645 he struck up a lasting relationship with his housekeeper Hendrickje Stoffels, and found himself involved in a costly legal battle with a former employee, a nursemaid, who had become his mistress after Saskia's death. He was declared bankrupt in 1656. All his possessions were seized and, losing his house, he was obliged to find lodgings in a rundown part of the city. But his genius was not spent. The year 1661, for example, saw the production of a large number of paintings, many of outstanding merit. The deaths of Hendrickje in 1663 and of his one surviving child, Titus, five years later, clouded his final years. Deeply saddened by these events, he lived a quiet, simple life with his daughter Cornelia (born to Hendrickje in 1654) until his death in October 1669. He was buried in the Westerkerk, Amsterdam, alongside Hendrickje and Titus, and his one-time palatial house is now a museum dedicated to his life and work.

xxxxxRembrandt's output was indeed phenomenal, as was the range of his accomplishment and the variety of his subjects. More than 600 paintings are attributed to him - the majority of them portraits or biblical studies - together with some 300 etchings and well over one thousand drawings. It is said that during the years 1632 and 1633 alone he produced no less than 50 paintings. Over the 40 years of his working life he painted some 60 self-portraits, and these provide a fascinating study of his developing 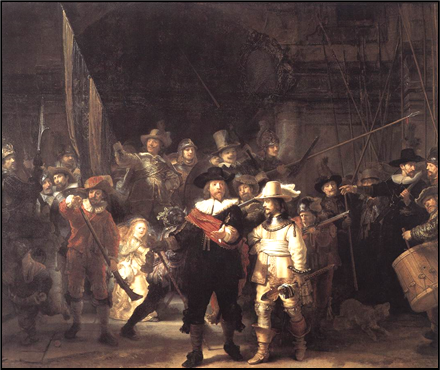 character in the face of changing fortune.

xxxxxHis religious works, particularly those of his later years, are deeply moving by their acute observation of human emotion, whilst his portraiture is particularly renowned for the sensitivity and sympathy of his interpretation, particularly when portraying the elderly. But in such works there was no place for flattery! You got what he saw! And alongside this deep understanding of human nature went a brilliant technical skill. No painter has surpassed his masterly use of light and dark (known as chiaroscuro), his thick application of pigment (known as impasto) and the sheer freedom of his vigorous brushwork.

xxxxxIn his early work he tended to prefer busy, crowded compositions, and he showed a keen eye for detail. His contrast of light and shadow - very much a feature of his work - was more emphatic at this stage of his career, as was his liking for the exotic. To these early days belong The Noble Slave and his dramatic works The Sacrifice of Isaac, The Blinding of Sampson and The Clemency of Emperor Titus. In 1642 he produced his masterpiece, popularly known as The Night Watch, a large canvas showing a company of home guard about to march out on duty (illustrated above). This busy scene, like The Anatomy Lesson of Dr.Tulp (illustrated below) broke the mould of group portraiture which, up till then, had consisted of a series of posed portraits in line or formal pattern.

xxxxxAfter this work, however, - the originality of which in no way pleased his clients - he tended to concentrate on scenes depicting Christ's ministry, such as his paintings Christ at Emmaus and The Adoration of the Shepherds (now in the National Gallery, London). And to this middle period also belong a large number of landscapes and etchings, in addition to paintings. 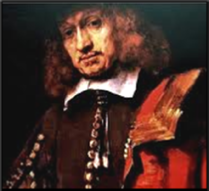 xxxxxBut some of his greatest paintings were produced during the 1650s and 1660s, despite - or perhaps because of - the troubled nature of his family life. His work took on a more spiritual quality, his lighting effects became more subtle, his colouring richer, and his impasto - now much in evidence - was used to suggest rather than define form and texture. This is to be seen in his brilliant portrait of his friend and patron Jan Six (detail illustrated), and The Jewish Bride of about 1665 (illustrated below), remarkable above all for the warmth of its luminous light. Two delightful female studies, Bathsheba and A Woman Bathing in a Stream (illustrated above) - probably modelled on Hendrickje - are outstanding works, as is his group portrait Syndics of the Drapers' Guild, regarded by many critics as one of his greatest masterpieces, despite its formal composition.

xxxxxIllustrated here are The Jewish Bride (possibly an oblique reference to the biblical story of Isaac and Rebekah), The Anatomy Lesson of Dr. Tulp, and The Return of the Prodigal Son.

xxxxxAs in the case of Leonardo da Vinci, Rembrandt's skill as a painter has tended to overshadow his wider talent. In fact his etchings and drawings show a brilliant mastery of the etching needle and the reed pen. Few artists have equalled his natural ability in these media, clearly shown in the three illustrations below. His superb drawing of The Sleeping Woman has been achieved with just a few hurried strokes of the pen.

xxxxxRembrandt's studio produced some fine artists, notably Carel Fabritius and Adriaen van Ostade, but his own work made little real impact over the next century. Though critics acknowledged his consummate skill, he was generally considered to be vulgar both in his choice of subject and his portrayal of it. Many of his works - particularly his etchings - were of common-place street scenes, and his depiction of the human form was far from flattering, be it in his portraiture or his biblical and metaphysical studies. It was not until the Romantic period of the mid-nineteenth century that his talent was rediscovered, and he was justly recognised as an artist who flouted convention, seeking to portray life and people as they really were, warts and all. Among his many works on show at the Rijks Museum in Amsterdam is his famous The Night Watch. 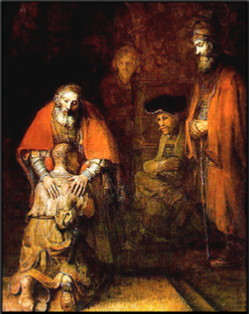