xxxxxIt was in 1628 that Oliver Cromwell was chosen as a parliamentary representative for Huntingdon. Here he quickly made his mark, supporting grievances against the king’s arbitrary rule and opposing any toleration towards Roman Catholics. In the 1630s he was beset with financial problems concerning his estate, but in 1640 he returned to Parliament, by now an ardent Puritan, and bitterly attacked the king’s illegal actions. When the civil war broke out in 1642, he quickly emerged as an able military commander and an inspiring leader. He played a major part in Parliament’s victory at Marston Moor in 1644, and having assisted in the making of the New Model Army, contributed greatly to the victory at Naseby a year later. By 1647, when the king, having been captured, sought Scottish help, Cromwell had become convinced that the king should be tried for treason. With the Royalist defeat at the Battle of Preston in 1648, and the king’s execution in January 1649, he emerged as the country’s leader. As a military commander he again showed his prowess, but, as we shall see (1651 CW), as a politician he was to fail in his attempt to establish a workable form of republican government. 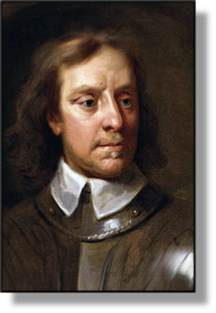 xxxxxOliver Cromwell was a descendant of Thomas Cromwell, one-time advisor to Henry VIII. Born of a noble family at Huntingdon, he was educated by an ardent Puritan named Thomas Beard before attending Cambridge University to study law. After about a year, however, he was obliged to leave following the unexpected death of his father in 1617. He then took over the running of the family's small estate and, at the same time, played an active part in local government. In 1628 he was chosen as one of the parliamentary representatives for Huntingdon, and quickly showed his fervent interest in political and religious reform. During his first session he strongly supported the Petition of Rights, then going through parliament - setting out grievances against the king's arbitrary rule - and he spoke out fiercely against any toleration of Roman Catholic practices within the Protestant church.

xxxxxOver the next ten years his fortunes fluctuated. In 1631, beset with financial problems, he was obliged to sell most of his estate at Huntingdon, but five years later he was able to move to property inherited at Ely. By this time he had become fervently devoted to the Puritan cause, having emerged, as he put it, "from darkness into light". And in politics too he had become strongly opposed to the king's personal rule, the so-called Eleven Years' Tyranny. In this he was not alone. There were many disgruntled landowners up and down the country, including his cousin John Hampden, who had openly opposed the king over his levying of ship money. In 1640 Cromwell returned to the House of Commons, this time representing Cambridge. The dispute between crown and parliament was then at its height and he added his support to the Grand Remonstrance, a host of grievances against the king's illegal conduct. 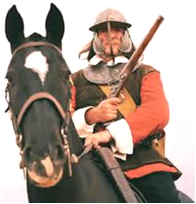 xxxxxWhen civil war eventually broke out in 1642 he quickly emerged as an able organizer and a remarkable leader of men. He devoted much of his time to raising a highly disciplined regiment of cavalry, and such was the efficiency of this force that he soon became recognized as an outstanding military commander. In 1644 he was made a lieutenant general under the earl of Manchester (whom he later openly accused of incompetence), and in July of that year played a vital role in the defeat of the Royalist forces at the crucial Battle of Marston Moor. It was on this battlefield that Cromwell's cavalry earned the respect of the royalist leader Prince Rupert, and were given the title of "the Ironsides" (illustrated). The following year he assisted Sir Thomas Fairfax in the training of the New Model Army and was appointed cavalry commander of the new force. Once again, he played a major role at the decisive Battle of Naseby. That Parliament won a resounding victory was due in no small part to the quality of his leadership during that engagement.

xxxxxIn the tortuous negotiations between the victors which followed the capture of the king, Cromwell attempted to reconcile Army and Parliament, but there was little trust on either side. Then any hope of finding an acceptable settlement came to an abrupt end in November 1647 when the king made his escape from Hampton Court, took refuge in Carisbroke Castle, on the Isle of Wight, and renewed the war with the aid of the Scots. Cromwell was given command of the army and, after putting down an uprising in Wales, crushed the Scots at the Battle of Preston in August 1648. He was now convinced that the time for talking was over; the king should stand trial on a charge of treason. In the meantime the army took matters into their own hands by what came to be known as "Pride's Purge". An officer named Colonel Pride simply barred certain members from the House. The Long Parliament was thereby reduced and the "Rump" which was left contained only those members who were in favour of bringing the king to trial!

xxxxxIn January 1649 the king was found guilty of treason and was executed at the end of that month. The reign of Charles I was over but, as we shall see (1651 CW), the civil war was not. For Oliver Cromwell there were more battles ahead. In these he was to win the day, but his success on the battlefield was to be in marked contrast to his performance in the political arena. Here he was to fail in his efforts to bring about the reforms required to establish a workable and acceptable form of republican government. 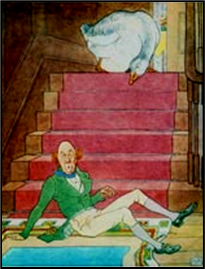 xxxxxIncidentally, the well-known nursery rhyme Goosey, Goosey Gander refers directly to Cromwell's Roundheads. They were noted for their "goose stepping march", and throughout the war they searched the houses of all known Royalists and Catholic sympathizers looking for king's men in hiding. Any suspect who refused to become a puritan was thrown into jail.

Goosey goosey gander, Whither shall I wander,

Upstairs and downstairs, And in my lady's chamber.

There I met an old man, Who would not say his prayers,

So I took him by the left leg, And threw him down the stairs.