xxxxxAs we have seen (1637), the Bishops Wars of 1639 and 1640 were the result of Charles’ determination to impose the Anglican Church system on the Scots, including the office of bishop. Lacking funds to deal with a rebellion by Scottish Presbyterians, he was forced to recall parliament in 1640 and the Long Parliament, as it came to be called, made him pay for his eleven years of personal rule. His taxes were declared illegal, royal courts were abolished, and parliaments, convened every three years, could not be dissolved without the agreement of its members. However, parliament was divided over these measures, and the Grand Remonstrance of 1641, setting out their grievances, was only just passed. Furthermore, when troubles broke out in Ireland and parliament demanded that the king give up his command of the army, Charles took action. He marched into the Commons and demanded the arrest of the five ring leaders, including their spokesman, John Pym. They had already escaped, but this action offended many members, and made war inevitable. Charles raised his standard at Nottingham in 1642.  The English Civil War had begun.

xxxxxAs we have seen (1637), the Bishops' Wars of 1639 and 1640 were rebellions by Scottish Presbyterians against the king's determination to impose the Anglican Church system throughout Scotland, including the office of bishop. Lacking funds to deal successfully with this situation Charles had been driven into the hands of Parliament, a body he had totally ignored for some eleven years. The first parliament of 1640 was short lived, but following the successful invasion of Northumberland and Durham by the Scots, the king had no real alternative but to summon a second assembly in November of that year. 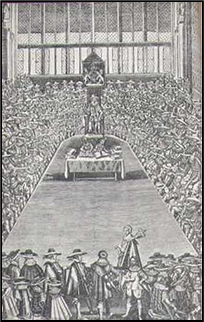 xxxxxThe Long Parliament, as it came to be known, was even more intransigent than its predecessor. Reforms were demanded before the granting of aid. It arrested two of the king's close advisors and both were eventually executed on charges of treason. Thomas Wentworth (the Earl of Strafford), the king's leading advisor and the man who had strongly advocated Anglican reforms within the Church of Scotland, was executed in May 1641. His close associate, William Laud, Archbishop of Canterbury, was beheaded some years later for his brutal persecution of the Puritans. On the matter of religious reform, however, little progress could be made. The Root and Branch Bill of December 1640, drawn up to abolish bishops in the Church of England, divided the Commons, and there was real fear that this issue would bring about conflict with the House of Lords.

xxxxxOn constitutional matters, Parliament achieved more. Charles was obliged to consent to a number of measures. The Triennial Act of 1641 provided for the convening of parliament every three years, and the king was forbidden to dissolve this assembly without the agreement of its members. The king's levying of taxes - like the Ship Money tax - was declared illegal, and the royal courts such as the Star Chamber - used as a means of oppression - were abolished. However, the Grand Remonstrance of November 1641, setting out a long list of grievances against the king, was only passed in the Commons by a narrow margin of eleven votes (159 to 148). 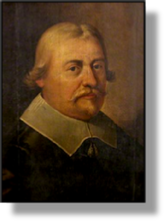 xxxxxUpxuntil this time the leader of the reform movement in the Commons, John Pym (illustrated), a skilled politician and a brilliant orator, had managed to effect change by compromise, but now opposing factions began to emerge. Furthermore, two recent events served to complicate matters. Firstly, Charles had paid a visit to Scotland and, by granting the Scots a Presbyterian Church, had reached a peace settlement - thus making him less dependent upon the support of Parliament. Secondly, a serious Catholic rebellion had broken out in Ireland and there were reports of thousands of Protestants being massacred. Parliament needed an army to meet the crisis, but feared that in the hands of the king it might be used against both Houses. It set about raising its own militia force and demanded that the king surrender his command of the army. This was a step too far. It is alleged that Charles responded with the words: "By God, not for an hour". Suspicion and fear then took over. There was a strong rumour that the king was about to launch an attack upon Westminster, and another that Parliament was planning the impeachment of the Queen, the Roman Catholic Henrietta Maria. 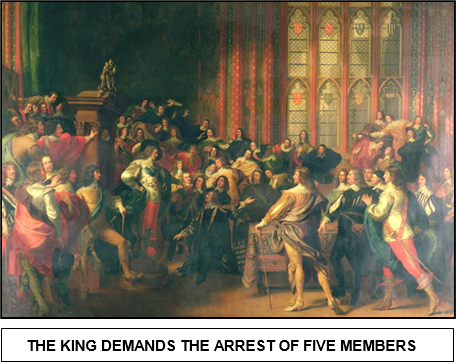 xxxxxIt was amid such bewildering uncertainty that the king decided to take matters into his own hands. In January 1642 he marched into the Commons, backed up with an armed contingent, in order to arrest five leading members of the House, including Pym. They had already made their escape - having been warned of the king's approach - but there was no escape from the consequences of his action. Many members of Parliament, even the moderates, saw this act as tantamount to a declaration of war. They split into two camps, whilst the king, having ensured the departure of his family to the continent, set up his government and military headquarters at York. In June a final attempt was made to reach a peaceful settlement. Parliament issued Nineteen Propositions, but among these were the proposals that Parliament should control the militia, take part in the choice of royal advisors, and initiate religious reform. Such ideas were totally unacceptable to a believer in the Divine Right of Kings. As we shall see, Charles raised the royal standard at Nottingham in August 1642, and the English Civil War, with all its dire consequences, had begun.

xxxxxIncidentally, the length of the Long Parliament is a matter of debate! All but 70 or so members were expelled in 1648 (thereafter it was known as "the Rump"), and then in April 1653 Cromwell had these members forcibly expelled, but as this action lacked royal assent it could be argued that it was invalid. Likewise In March 1660 when the remaining members passed an act for its dissolution this also lacked validity for the same reason. Later that year, when the Convention Parliament finally dissolved the Rump, this action could also be seen as null and void because the Convention Parliament itself had not been summoned by the king! The matter was finally resolved when later legislation (legal this time!) reinforced and thus made valid the action taken by the Convention Parliament! ……

xxxxx……   AxHistory of the Long Parliament was produced by the English writer Thomas May in 1647. He wrote a number of comedies and tragedies, but his reputation rests on this piece of prose. He claimed that it was an impartial history, but he appears to have favoured the Parliamentary cause.