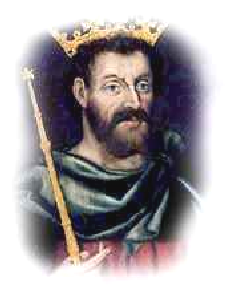 xxxxxAs the fourth son of Henry II, John's father had already parcelled out his domains to his three sons when John was born, hence his nickname, John Lackland. He may well have remained that way had it not been for the premature deaths of his brothers, Henry and Geoffrey. His remaining brother Richard, on coming to the throne, did provide John with land and titles, but once departed for distant battles in the Holy Land, John virtually took over the running of the country. Richard did eventually return to take up his throne but shortly afterwards was killed while fighting in France.

xxxxxWith the death of Richard, a dispute arose over the right of succession. John was recognised as king by England and Normandy, but the French possessions of Anjou and Brittany looked to Arthur, Richard's nephew, as the rightful heir. In the fighting that followed, Arthur disappeared - taken captive it is believed and presumably murdered on the orders of John - and Normandy (which had been in English hands for 150 years), together with Anjou, Maine and parts of Poitou were lost to the King of France. John, not the best of soldiers, never recovered these lost lands. 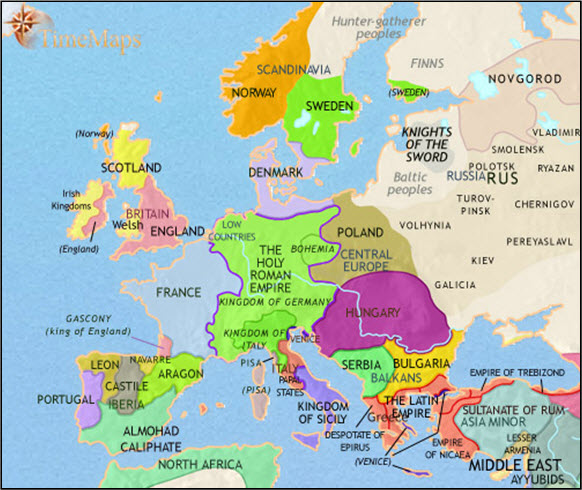 xxxxxAt home, John fared no better. Because of his refusal to recognise Stephen Langton, a friend of Pope Innocent III, as Archbishop of Canterbury, England was placed under a papal interdict and all churches were closed. John replied by confiscating a great deal of church property and the revenues which went with it, and seemed little concerned when he himself was expelled from the Church. But by now a French invasion of England became a distinct possibility. Furthermore, his barons were becoming extremely restless. In 1213 John backed down on a grand scale. He paid homage to the Pope and surrendered England to papal authority, receiving it back as a tenancy on payment of an annual tribute of over £600. It was a humiliating defeat.

xxxxxAt the same time, his harsh treatment of the barons - many of whom had supported him during the reign of Richard I - united them against him. He had inherited large debts from Richard's crusade and the ransom demanded for his release from captivity. To pay off these debts and, in addition, to meet the high cost of his own wars in France, he resorted to extortion, heavy taxes, and the confiscation of property. It might not have been so bad had he won the wars he fought, but this was certainly not the case. He had lost virtually all of his French possessions during the conflict over his succession, and his attempts to recapture them ended in failure, first at Poitou and then at the Battle of Bouvines in 1214. 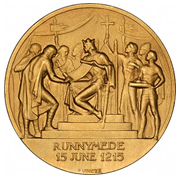 xxxxxIn 1215 a large group of his barons, many from the north, aided and abetted by Archbishop Langton, drew up a list of demands to safeguard their feudal rights and privileges and those of the Church. And to ensure that the king complied with their demands - and doubtless to emphasise the strength of their determination - they went to war with the king in May and seized hold of London. At Runnymede the following month John was obliged to agree to these Articles of the Barons, contained in a document which came to be known as the Magna Carta.

xxxxxBut true to form, soon after agreeing that the Crown should be subject to the law, John repudiated the charter and civil war broke out yet again. During this conflict - known as the Barons' War - Prince Louis of France was invited over to take the English throne. The situation was saved by the death of John in October 1216. He was taken ill and died at Newark. He was buried at Worcester Cathedral - where his effigy can be seen today - and his son came to the throne as Henry III.

xxxxxHistory has given John a bad press and much of it is deserved. His intrigues against his father and brother Richard, his complicity in the death of his nephew Prince Arthur, and his disastrous dispute with the Pope, not to mention his resort to violence and intimidation as part of a ruthless tax policy, made him the most unpopular of kings. By nature he possessed a violent temper, could never be trusted, and took a sadistic pleasure in cruelty to others.

xxxxxIt must be said, however, that he did inherit a great deal of debt, and his stand against the pope over the monarch's traditional right to appoint the Archbishop of Canterbury, was courageous if somewhat foolhardy given the experience of his own father in such matters. He did lead successful campaigns in Scotland and Wales, and despite his failings, he was a cultured and literate man who showed an intelligent interest in the administration of his realm, and travelled around it to see conditions for himself. His reign was characterised by failure, but it would be unjust to lay all the blame upon the character of this one man. He attempted to govern a land that showed very little desire to be governed.

xxxxxIncidentally, the cause of John's death is uncertain. Some say that he died of eating too many peaches or eels and drinking too much cider during a hearty supper; others that he was taken ill while crossing the Wash during his final campaign. Perhaps he became sick at sea as a result of over-indulgence the night before! We shall never know.