xxxxxGenghis Khan had united all Mongolians under his command by 1206. He began his military campaigns seven years later and, by the year of his death, his empire - the Mongol Empire - stretched from the Black Sea in the West to the Yellow Sea in the east, and Siberia in the north to South East Asia in the south. Little wonder that he should earn the title "Perfect Warrior". But in his campaigns - which brought him great wealth - he also gained a reputation for barbarism on a terrifying scale. His conquest of Khwarezm, for example, became a byword for merciless killing, and his army laid to ruins the ancient civilisation of Cathay (China). Nonetheless, as we shall see, at his death in 1227 (H3) he left behind a well- organised, disciplined empire which, given time, proved capable of conquering the whole of China and Persia, and much of Russia. 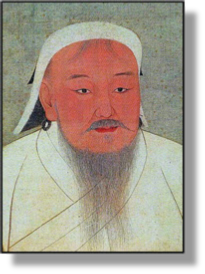 xxxxxGenghis Khan became ruler of the Mongol peoples in 1206 and seven years later embarked upon a military campaign which was to create an empire stretching over vast tracts of Asia. He began his conquest of northern China in 1213, had captured Peking by 1215, occupied the Korean peninsula by 1218, and, before invading India and Russia, had conquered Khwarezm, a vast empire stretching across modern Iraq and Iran and parts of Turkestan. When he died, the Mongol Empire extended from the Black Sea in the west to the Yellow Sea in the east, and Siberia in the north to the northern borders of South East Asia in the south. It was, in fact, the largest area that any one man has ever controlled.

xxxxxHe was born in about 1167 and given the name Temujin. His father was the chieftain of one of the many Mongolian tribes that roamed the Gobi Desert in central Asia at this time. On the death of his father he took over the rule of the tribe. Although only 14 years old, he soon won the respect of his people and united his tribe into an efficient fighting force. His struggle for wider recognition was a hard 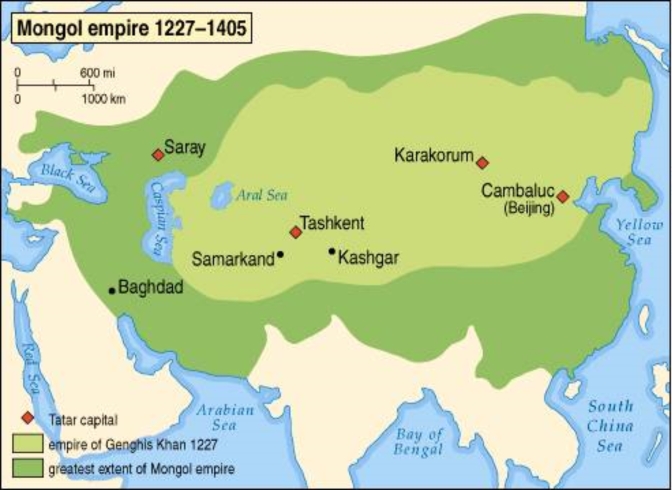 and bitter one, but by 1206 he had subdued the other nomadic tribes and united all Mongolians under his firm command. He was held in such high esteem that they gave him the title “Genghis Khan”, Perfect Warrior. His genius as a ruler and fighter was already proven.

xxxxxNow with a disciplined and highly motivated fighting force, and one that was well equipped and supplied, he set out to make himself an empire. Breaking out of the steppe land, he led a series of campaigns which was to gain for him rich booty, vast areas of Asia, and a reputation for ruthlessness and savagery. Earlier invaders had left a trail of destruction behind them and committed atrocious acts of barbarity, but never on so large a scale, and never with such long-term effects. His conquest of Khwarezm, in particular, was to become a byword for cruelty, atrocity and the merciless slaughter of the vanquished. Many cities were destroyed, and their inhabitants massacred en masse. In Cathay (China), too, his armies pillaged and plundered, laying waste the provinces of this ancient and civilised land.

xxxxxBut Genghis Khan was not just a marauding savage. He invited to his court a number of foreign men of learning to help in the governing of his huge empire, produced a great body of laws to control every aspect of his subjects’ lives, and brought to his capital a host of skilled artisans, musicians and men of medicine. Such were his leadership and military skills that, as we shall see, at his death in 1227 (H3) he passed over to his successors an empire which was so well organised and disciplined that it was capable of yet further expansion. It was eventually to extend its power over the whole of China, Persia and most of Russia, and to form the nucleus of that great Mongol Empire which was to feature so prominently in the coming years.

xxxxxThe ruins of his capital, Karakorum, are situated south-west of Ulaanbaatar in Mongolia, and it is alleged that his remains are preserved at Ejin Horo in Inner Mongolia.

xxxxxIncidentally, legend has it that when he was born Temujin was holding a clot of blood in his hand. Perhaps this was an omen as to the enormous amount of blood he was to shed in his lifetime. It is said, for example, that having defeated the Tartars, he slew all those taller than the height of a cart axle.