xxxxxThe heretical Christian sect known as the Albigensians (or Cathars) first appeared in northern France and the Low Countries in the 11th and 12th centuries, but later settled in southern France, in and around Toulouse. They argued that the Catholic Church, by its corruption and immense wealth, was the agent of Satan. Such ideas posed a serious threat to Rome, but it was not until 1209 that Pope Innocent III launched a crusade against these heretics, led by the French baron Simon de Montfort. The movement was brutally suppressed, but it was not finally crushed by the Inquisition until the 14th century. 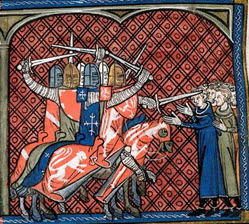 xxxxxThe Albigensians were members of an heretical sect of Christians who first appeared in northern France and the Low Countries in the eleventh and twelfth centuries. Persecuted and expelled, they came to settle in southern France, mainly in the province of Languedoc. They took their name from the town of Albi but, in fact, the movement was mainly centred in and around Toulouse. They were also known as Cathars from a Greek word meaning purified.

xxxxxIn their belief, the whole of existence was seen as a struggle between the God of light and the God of darkness. They believed that Christ was the God of goodness, but they held that the Christian church with its corrupt clergy and immense material wealth was the agent of Satan and had to be avoided. It is hardly surprising that such views alarmed the Roman Catholic Church of the day! 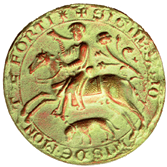 xxxxxAttempts to deal with these heretics had been made at the Council of Toulouse in 1119 and again in 1184 when Pope Lucius III called for an inquisition, but no serious action had been taken. In 1209, after attempts at peaceful conversion had likewise failed, Pope Innocent III launched a full-scale crusade. Led by the French baron Simon de Montfort, it brutally suppressed the Albigensians and, in so doing, laid waste much of southern France. Thousands of men, women and children were killed in what amounted to a civil war between the nobility of north and south France. Despite the ferocity of the attack, groups of heretics survived in isolated areas, and were not finally exterminated by the Inquisition until the fourteenth century.

xxxxxIncidentally, an idea as to the ferocity of the crusade can be gained from the attack launched on the walled city of Beziers. Having gained entrance to the fortress the troops were instructed by the papal legate to kill all the inhabitants on the grounds that "God will recognise his own"! ……

Xxxxx…… Pope Innocent III (in office from 1198-1216) was one of the most powerful and influential popes of all time. Dedicated to the “liberty of the Church”, he was determined to assert his supremacy over all the kings of Europe. Royal power, he claimed, “derived the splendour of its dignity from pontifical authority”. As we have seen, apart from his campaign against the Albigensians, he launched the Fourth Crusade in 1202, and played a part in the launching of the Fifth a year before his death. And, as we shall see, it was Innocent III who excommunicated King John of England in this year, 1209, following his refusal to accept Stephen Langton as Archbishop of Canterbury.

xxxxxThe Dominican Order was formed because of the Albigensians. Following a visit to them in 1203, the Castilian Domingo de Guzman, preaching the virtues of poverty and penance, devoted his life to their conversion. He stayed with them during the terrible days of the crusade, and afterwards his work was recognised. In 1215 he and his followers were appointed "diocesan preachers", and a year later their order was approved by the Pope. Similar in many respects to the order of St. Francis, it was organised on almost military lines, placed emphasis on education, and later based its teaching on that of Thomas Aquinas. By the early 1220s, houses had been set up across Europe, and some ten years later the order's influence began to spread far overseas when the Dominicans were charged with the world-wide supervision of the Inquisition. Thomas Aquinas and the religious reformer Savonarola were members of the order. 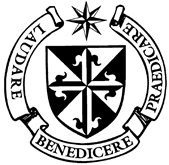 xxxxxThe Dominican Order, sometimes known as the Order of Friars Preachers, owes its existence to the Albigensians of southern France. It was in the year 1203 that Domingo de Guzman, a native of Castile and a member of a religious community in Osma, accompanied his bishop on a preaching mission to the south of France and came into direct contact with the Albigensian heretics. He returned two years later, determined to dedicate his life to converting the heretic and helping the uneducated. He argued that the Albigensians would only be returned to the Catholic faith if the Church preachers were themselves to renounce worldly goods and preach the virtues of poverty and penance.

xxxxxHe began his campaign in 1206 with the establishment of a convent of nuns at Prouille, made up of a number of Albigensian women converts. During the crusade which followed, Dominic (i.e. Domingo) remained at Prouille, and others joined him in what he called his "evangelical preaching". When the civil war which resulted from the Albigensian Crusade came to an end in 1213, the work he had achieved was recognised, and in 1215 he and his followers were appointed "diocesan preachers". Sixteen in number, they drew up the new order's rule of life, based on that of St. Augustine, and in December 1216 the order was officially recognised by the Pope.

xxxxxIn many respects the Dominican Order was very similar to that which had been established in central Italy by Francis of Assisi just seven years earlier. It is thought likely that Dominic and Francis 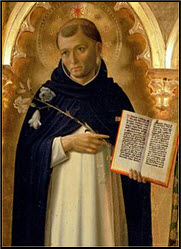 met in 1215 at the very time when rules for the new order were being drawn up, though other sources place the meeting in the early 1220s. What is certain is that both orders valued and continue to value the friendship then forged.

xxxxxDominic (illustrated) proved an able administrator, and the movement flourished under his decisive and active leadership. The order was organised on almost military lines with master generals in charge of well-defined provinces, and the priests drafted like soldiers to serve wherever they were needed. Dominic spent much of his time in Rome, but he also toured parts of Europe to ensure that the order remained close to the people it served. 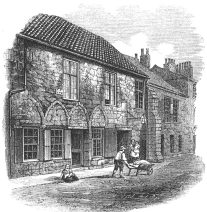 xxxxxMuch emphasis was placed on the value of education. As early as 1217 two of the first houses were established in the university towns of Bologna and Paris to encourage and advance the study of theology, and this pattern was followed as the order expanded. Later the doctrinal system of Thomas Aquinas became the basis of their theological teaching. By the end of the century some 50 friaries were at work in Europe, with houses as far afield as Greece, Russia, Ireland and Greenland. The order came to England in the early 1220s with the establishment of a house in Oxford. Here the priests came to be known as Black Friars because of the colour of the coat and hood that they wore over their white tunic. The picture shows the house of the Dominicans or Black Friars in Newcastle-on-Tyne at this time.

xxxxxThe order received an added boost some years later with the establishment of the papal Inquisition in the 1230s. The Dominican order was charged with its supervision and, as a consequence, the scope of its activities widened considerably, reaching into the Americas and as far as India via European explorers, colonisers and missionaries. The order's contribution in modern times has continued to be in scholarship and the preaching of the gospel in the missionary field, but a valuable contribution is now made in teaching and nursing, particularly by the Dominican sisters.

xxxxxDominic died at Bologna in 1221 shortly after a visit to Venice and was made a saint in 1234. Among outstanding men of his order are the philosopher Thomas Aquinas, the religious reformer Savonarola, and the artists Fra Bartolommeo and Fra Angelico.