xxxxxTwo distinct groups took part in the tragic Children's Crusade of 1212. One was led by a French shepherd boy named Stephen. Claiming to have been inspired by Christ in a vision, he persuaded some 30,000 to make for Marseilles. Many of those who made the journey were drowned when their ship sank, or were sold into slavery on reaching Alexandria. The second contingent, led by a lad called Nicholas of Cologne, crossed the Alps with about 20,000. Large numbers perished en route, and many of those who managed to reach Italian ports were turned away and left to their own devices. Some made for home, whilst others settled in Rome or one of the other big cities. Badly organised and with no official backing, these pitiful enterprises amply testify to the fervour whipped up by these crusading adventures. 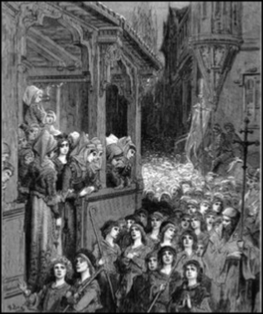 xxxxxThe Children's Crusade of 1212 is undoubtedly one of the most tragic episodes that history has to record, even taking into account the age in which it was conducted. In that year thousands of children from Europe, mostly from France, Germany and the Low Countries, were allowed to set out with the unbelievable aim of recapturing Jerusalem for Christianity, using not force but the power of love!

xxxxxTwo distinct groups took part. The first was led by a French shepherd boy named Stephen from the area around Vendôme. Claiming to have had a vision of Christ dressed as a pilgrim, he attracted thousands of followers. It is estimated that some 30,000 made their way to the Mediterranean port of Marseilles, many perishing on the way. On the sea journey that followed, some of the ships sank and many children were drowned. Of those who managed to reach Alexandria, many fell victim to unscrupulous merchants and were sold into slavery. Others died of hunger or disease.

xxxxxThe second group was led by a young lad known as Nicholas of Cologne. He preached the need for a Children's Crusade and attracted some 20,000 children. After crossing the Alps they became scattered across northern Italy. Many found their way to Genoa, Venice and Brindisi, but once arriving at these ports, the majority were refused transport across the Mediterranean. Some travelled to Rome where, mercifully, Pope Innocent III took pity on them and released them from their crusade vows. The fate of these thousands of young crusaders is not known. It is believed that many settled in Italy, being daunted by the rigours of a return journey. Doubtless others did manage to reach the North African coast and, like those in the French group, were sold into slavery. 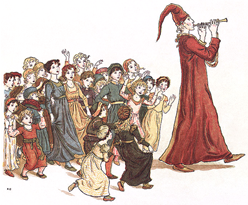 xxxxxTragic though this episode is, it does testify to the crusading fervour which gripped ordinary people throughout Europe, many believing that taking part in a crusade would bring them salvation. These particular ill-conceived enterprises were not given any official approval or support, and there were many responsible people who deplored them, but they took place nonetheless.

xxxxxIncidentally, and not surprisingly, the Pied Piper of Hamelin, who in 1284, so the story goes, led the town's children away to an unknown fate, has been likened to Nicholas of Cologne. The legend was made popular in England with the publication of Robert Browning's poem of that name in 1842.