xxxxxThe Magna Carta was an attempt by barons and churchmen to reduce the power of the monarch, achieved, be it noted, at a time when the king's fortunes were at their lowest ebb, and the barons were in control of London! The document was accepted by John at a meeting at Runnymede in June 1215, but its 61 clauses had nothing new to say, they simply re-affirmed the existing laws. One did state that no person should be imprisoned or deprived of his property without just cause, but this referred to the privileged, like barons and freemen. And once the meeting was over, war broke out again between the king and his nobles. And as feudalism went into decline, so did the significance of the document. Nevertheless, in the long term, it proved of value. The king, it declared in writing, was not above the law, and his subjects also had certain rights. In that respect, the Magna Carta - copies of which were sent throughout the land - was the first small step towards the rights of the common man as we know them today. 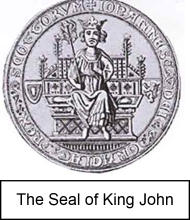 xxxxxThe Magna Carta was the result, - but by no means the end result - of a running dispute between the King and his barons and churchmen. It was an attempt to reduce royal power, both in its excessive demands for feudal dues and its constant attacks upon the authority and privileges of the church. The document, presented to the king at Runnymede in June 1215, was the brain-child, we are told, of Archbishop Stephen Langton. He it was who proposed that the barons draw up a binding document to keep the monarch in check. John was in a weak position at the time. Apart from the recent loss of most of the realm's possessions in France, his barons had seized control of London only a month earlier and were not going to give up the capital for nothing. The king conceded. He gave orders that the great seal of England be attached to the Charter, but, be it noted, he never signed it.

xxxxxIn the minds of many people the Magna Carta has come to represent an important document in the common man's struggle for freedom. In fact, none of its 61 clauses, hammered out over five days, had anything new to offer, and many were concerned with minor matters related to the feudal system. Generally, they simply re-affirmed the laws as they existed at that time or confirmed the privileges enjoyed by certain cities or church officers. It was stated, it is true, that no person should be imprisoned, deprived of his property or outlawed except by the law of the land, but this only referred to freemen, the barons and other privileged parties. The serfs and villeins didn't get a look in. 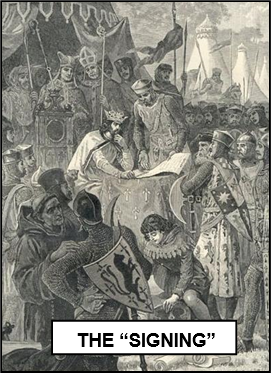 xxxxxThe last clause of the document, and the most significant, established a Council of 25 barons which was authorised arbitrarily to organise a rebellion against the King should he fail to keep his promises. It was quickly in action. No sooner was Runnymede over than the agreement - virtually an abdication of royal power - was put aside, and war broke out again between the King and his barons. The conflict continued until John died in October the following year.

xxxxxBut in the long term the Charter did have a significant value. It put in writing that there were limitations to royal power, and the king was not above the law. The subject (albeit only the freeman at this time) had certain rights of his own, and these must be respected. Such statements may have had little or no influence at the time or in the immediate future. Indeed, the Tudors and some Stuarts acted as if they had never heard of them. Furthermore, as feudalism went into decline so did the significance of the Charter. But these statements had been made, and they had been accepted. They were an aspiration and, later, an expectation, nothing more than that, but, nevertheless, the Magna Carta can be seen as the first small step towards the rights of the common man.

xxxxxFollowing the agreement at Runnymede copies of the Charter were sent throughout the land, each written on a piece of parchment about 10 to 15 inches in size. Four original copies still exist. There is one in both Salisbury and Lincoln cathedrals and two in the British Museum. The Charter was up-dated in 1225, but this resulted in little substantial change.

xxxxxIncidentally, the Runnymede meadows where the Charter was agreed - alongside the Thames some 20 miles west of London - is now owned by the National Trust and is open to the public. On Cooper Hill, overlooking the river, there is a monument commemorating the event.

xxxxxThe nineteenth century English writer Rudyard Kipling wrote a poem about the signing of the Magna Carta in a work entitled What Sayeth the Reeds at Runnymede. One of the verses reads:

Your rights were won at Runneymede!

No freeman shall be fined or bound

Or dispossessed of freehold ground,

Except by lawful judgment found

And passed upon him by his peers.

Forget not after all these years