xxxxxAs we have seen, little is known about the origins of the Inca Empire. Legend has it that Manco Capac founded the royal dynasty in about 1100 (H1). Certainly by 1200 the Incas were well established in the Cuzco valley. Their capital Cuzco was the hub of the empire, noted for its gigantic stone buildings and the road network which extended from it. Inca rule was a harsh one, administered by priests whose worship of nature included forced labour and much animal and human sacrifice. As we shall see, the Incas gained much territory by taking over the Chimu kingdom in 1466 (E4), and by the beginning of the 16th century their empire of 12 million people covered modern Peru and Ecuador, together with parts of Chile, Bolivia and Argentina. 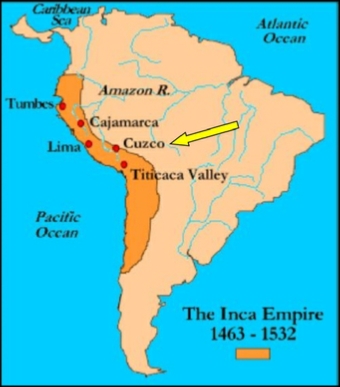 xxxxxAs noted earlier, little if anything is known of the beginnings of the Inca Empire which, by the late fifteenth century, covered vast areas of South America and could claim to be the largest native empire on the American continent. Legend has it that the founder of the Inca royal dynasty, Manco Capac, (himself of doubtful authenticity) established the empire's ancient capital of Cuzco around the year 1100 (H1) when the Inca people moved into the area from Lake Titacaca. Certainly at this time there were a number of small warring kingdoms in what is today an area of southern Peru, and it might well be that the Inca were then emerging as the dominant force in the region. What is known is that the Incas were well established in the valley of Cuzco by around 1200.

xxxxxTheir capital, Cuzco (arrowed), situated in a broad valley of the Andes at a height of over 11,000 feet, is the native word for "navel", so named because the city came to be regarded as the centre of the Inca world, the hub from which the empire's impressive network of roads was developed. Later, too, the city became noted for buildings such as the fortress of Sacsahuaman and Coricancha - the temple of the Sun - built in enormous stone blocks, so accurately cut that they needed no mortar in their construction. These enormous edifices testified to the advanced state of their technology and their skill as mathematicians and architects. 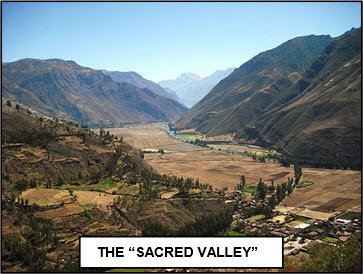 xxxxxTheir rule was a harsh one. Garrisons were established throughout the lands which had been conquered, and there was forced resettlement of large numbers of subject people in order to break down tribal identity and thus ensure political stability. The Inca was regarded as a descendant of the sun, and it was the priests who administered the empire, allotting labour for the building projects and irrigation schemes. The state religion was centred mainly around the worship of nature gods - notably Inti the sun god - and included forced labour and much animal and human sacrifice, but, surprisingly enough, native religions were tolerated. The economy was based on agriculture, as one might expect, and a careful record was kept of the production and distribution of crops.

xxxxxAs we shall see, in 1466 (E4) the Incas overran the powerful Chimu kingdom to the north, and then embarked on a rapid period of expansion. By the beginning of the sixteenth century, just before their overthrow by a small Spanish force under the command of Francisco Pizarro, their empire controlled some 12 million people and covered most of present-day Peru and Ecuador together with parts of Chile, Bolivia and Argentina.

xxxxxIncidentally, llamas were an essential part of the Inca way of life. They were used to carry goods, their wool provided warm clothing, and their dung was used to fertilize their crops, notably potatoes and maize. They were sometimes killed to provide meat, but the Incas generally lived off wild animals such as rabbits and deer.