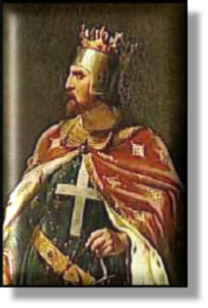 xxxxxKnown as "the Lion-heart", Richard I is one of the best known of English monarchs, despite the fact that he spent only six months of his reign in England. His fame rests mainly on his prowess on the battlefield. As a member of the Third Crusade, he spent three years in the Holy Land where he won a number of victories over the Muslims but failed to recapture Jerusalem. His most significant victory proved to be his conquest of Cyprus, which he captured during his sea voyage out to the Levant. It was while staying at Limassol on this island that he married Berengaria of Navarre, but there were no children by this marriage.

xxxxxOn his return to Europe, he spent the last five years of his life defending his empire in France, a vast stretch of land which included Normandy, Anjou and Aquitaine. He won a series of battles against the French king, Philip II, including victories at Freteval and Courcelles, but in April 1199, while laying siege to the castle of Chalus in the Duchy of Acquitaine, he was mortally wounded by a bolt from a crossbow. He was buried in the abbey church of Fontevrault, where his parents had also been laid to rest.

xxxxxApart from the years spent fighting, he was also held captive on the continent for well over twelve months. While returning from the crusade, a storm drove his ship ashore at Venice. He made his way across Europe in disguise, but on reaching Vienna he was captured by the Duke of Austria, held prisoner, and then handed over to the German Emperor, Henry VI. He was only released after the payment of a huge ransom, the enormous size of which provides ample proof of the growing prosperity of England at this time.

xxxxxThe dashing figure cut by this gallant, fighting king, - a man with the heart of a lion - inevitably made him the hero of countless romantic legends and the subject of many a troubadour song. Indeed, Richard was himself a poet. And according to one legend - first contained in the thirteenth century Narrative of the Minstrel of Reims - a certain troubadour from northern France named Blondel de Nesle, having discovered that Richard had been imprisoned by the German Emperor Henry VI, played a large part in gaining his release.

xxxxxBut in fact this charismatic hero-king did little for England. He had but two major aims: to take part in the Crusade and to defend and, if possible, extend his possessions on the continent. It is true that, before departing for the Holy Lands, he appointed the Bishop of Ely, William Longchamp, to rule the country in his absence, but within a few months his brother, Prince John, backed by a set of powerful barons, was the power behind - if not on - the throne. Thus the absence of the monarch over a number of years - close on ten - , plus the dependence of John upon the support of the barons, undermined the authority of the crown and sowed the seeds of future unrest.

xxxxxIn addition, he introduced a variety of new taxes - one called the Saladin tithe - and put most of his personal possessions up for sale in order to cover the cost of his overriding ambition, the recapture of the Holy City of Jerusalem. And this burden of taxation was substantially increased when a huge ransom had to be paid to the German Emperor, Henry VI, to secure his safe return. A gallant and inspiring fighter he might well have been on distant battlefields, but at home he was not a popular monarch. Nor were matters made easier by the lack of an heir. Richard was, in fact, a homosexual and his marriage to Berengaria of Navarre was a marriage in name only.

xxxxxIncidentally, though the legend of Robin Hood has never been authenticated or given a place in time, there is a belief that this outlaw and his band of merry men in Sherwood Forest might well have been robbing the rich and paying the poor during the reign of Richard I. However, the ballads about this popular hero tend to suggest that if he did exist, then he was likely to have been around in the fourteenth century during the agrarian discontent that culminated in the Peasants' Revolt of 1381.

Incidentally, the early history of the English royal coat of arms is not clear-cut. What is certain is that by 1198 Richard I was using the coat of arms illustrated above - a red shield with three running gold lions showing the full face and arranged one above the other. Earlier than that, the most likely explanation is that the first lion was that of Rollo, Duke of Normandy, and the second was that of Maine, a country that had been taken over by Normandy. The two lions came over on William the Conqueror’s coat of arms and then the third was added by Henry II, probably to represent his wife, Eleanor, Duchess of Aquitaine, the mother of Richard I. Today the arms appear on the first and fourth quadrants of the British Royal Standard, and the three-lion logo is used widely to represent England, especially in sport.