xxxxxBy the 9th century the Maya had constructed one of the greatest civilisations in the world, based around modern-day Guatemala and El Salvador. Their many cities were noted for their huge stone buildings and the skill of their artisans in sculpture, metalwork, weaving and pottery. They worshiped nature gods and their ceremonies, including human sacrifice, were based on a knowledge of astronomy. They also developed a form of hieroglyphic writing. For reasons unknown, the civilisation went into decline in the 10th century, but some Mayas survived by settling in the Yukatan peninsula to the north. Here, together with the Toltecs, they formed a state, first centred on the capital of Chichen Itza and, then, by 1200, on the walled city of Mayapan. Here they recaptured some of their former glory but, as we shall see, by 1460 (H6) the state began to break up and could muster little resistance against the Spanish conquistadors when they arrived in the following century. 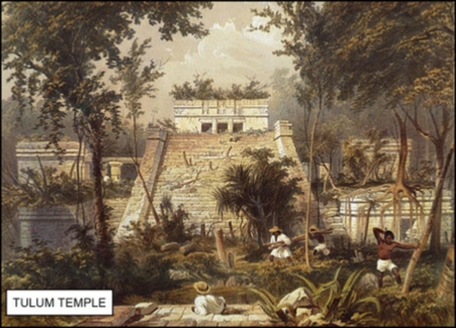 xxxxxThe Maya had settled in villages in modern day Guatemala and El Salvador as early as 1,500 B.C. and their development was such that by the ninth century A.D. they had constructed one of the greatest civilisations in the western world.

xxxxxAt the height of its power, around 900 A.D., the Mayan empire could boast of dozens of cities and ceremonial centres, each with huge stone buildings and stepped pyramids. Their artisans showed great skill in sculpture, relief carving and gold and copper work, and there was no shortage of skilled weavers, potters and farmers. Quite early on they had developed a form of hieroglyphic writing, which they carved on stone tablets or put down on paper made from tree bark. They worshipped a large number of nature gods, and their ceremonies involved human sacrifice, often timed by reference to an elaborate calendar system based on the movements of the sun or Venus. 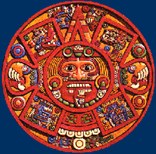 xxxxxIn the early part of the tenth century, this advanced civilisation went quickly into decline, the centres were abandoned, and within a few years thick jungle-vegetation covered the buildings and terraces which had testified to the empire's greatness. The reasons for this rapid decline are not clearly understood. It might well have been a change in climate, the sudden incursions of neighbouring tribes, the migration of peoples from central Mexico, or the scarcity of agricultural land as the population increased. Recent archaeological finds have also suggested that bitter disputes might well have broken out between rival factions within the empire, instigated, perhaps, by diverging views over matters of religious rites, an important element in daily life.

xxxxxBut the Mayan civilisation was not completely at an end. Some Mayas withdrew to settlements established earlier in the Yucatan Peninsula to the north, and whilst the empire never recovered its former power and grandeur, some new cities and ceremonial centres were built and others were re-developed, like the city known as Chichen Itza (arrowed). Dependent as it was upon underground sources for its water supply, this city became famous for its worship of the rain god. In about 987, led by their King Quetzalcoatl, the Toltecs expanded into the region and, working with the Mayan people, developed Chichen Itza into their capital, making it a thriving centre of a large state. 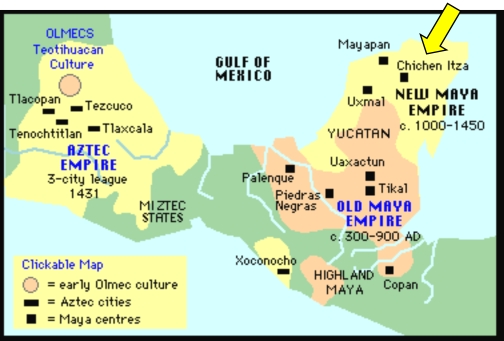 xxxxxIn 1187, following a revolt from within, Chichen lost its predominant position, and its place was taken by the walled city of Mayapan. By 1200 this settlement had become a major political and religious centre and the capital of a sizeable Mayan state. This revival of Mayan power in the area was further advanced when their capital city joined with the cities of Chichen and Uxmal to form the League of Mayapan. Over the next two centuries, however, internal strife and the growing influx of peoples from central Mexico sapped Mayan strength, and, as we shall see, by 1460 (H6) the state began to break up into isolated village communities. When the Spanish arrived in the sixteenth century the Mayas provided little opposition, though it is interesting to note that they resisted the European invaders longer than either the Aztecs of this area or the Incas of Peru.

xxxxxLater, as we shall see, the American explorer John Lloyd Stephens, accompanied by an English illustrator named Frederick Catherwood, travelled to Central America in 1839 and came upon the imposing ruins of Copan. Together they compiled a book about their findings and the early Mayan way of life.