xxxxxIt was during a serious illness in 1202 that Francis of Assisi had a series of visions calling him to proclaim the Christian faith. From that time onwards he led a life of dedicated service and total poverty, travelling the countryside and calling upon people to “walk in the footsteps of Christ”. The Franciscan Order received the pope's blessing in 1209, and within ten years there were some 5,000 mendicant friars working in Europe and overseas. He travelled to Egypt at one time, but spent most of his life in and around Assisi in northern Italy. In 1221 he formed the Third Order, designed for lay people who wished to adopt the Franciscan way of life. It was at the age of 42, whilst at prayer, that he received the stigmata, the marks upon his body of the five wounds suffered by Christ at the crucifixion. These sacred marks were not discovered until after his death. He was made a saint just two years later. Today he is remembered above all for his love of all living things, and for his example of Christian virtue. The movement he founded remains to this day but, as we shall see it became bitterly divided towards the end of the century and the rift was not healed until 1325 following the intervention of the then Pope John XXII (1318 E2).

xxxxxFrancis was born Francesco Di Pietro Di Bernardone, the son of a wealthy cloth merchant of Assisi in central Italy. In his youth he enjoyed the carefree life of a young man about town, but in 1202, after taking part in a local war and being held prisoner for more than a year, he became seriously ill. During this illness and soon after his recovery he had a series of visions and dreams calling him to embrace and proclaim the Christian faith. From this time forward he led a life of dedicated service and total poverty, travelling the countryside as Christ had done before him and preaching a simple message of faith and hope based on the Christian gospel. The world, he joyfully proclaimed, was God's world, and all living creatures should join in praise of their creator. His message was simple: “Follow the teachings of our Lord Jesus Christ and walk in his footsteps”. 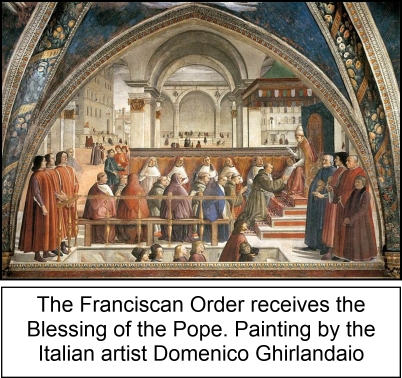 xxxxxThe impact of this street preacher, dressed only in a coarse, brown habit, calling for a life of poverty and helping outcasts and lepers, was immense. From its founding in 1209, when Francis and eleven of his followers travelled to Rome to receive the Pope's blessing, the Franciscan Order took off. Within ten years the movement numbered 5,000 mendicant friars, and was at work in many parts of the world. The members of the order were known as friars because, unlike monks, they were not confined to monasteries but wandered about, preaching the gospel and working or begging for their food.

xxxxxFrancis spent most of his life in and around Assisi, and was responsible for the repair of a number of dilapidated chapels in the area. He did attempt to go to the Holy Land and to visit the Moors in Spain, but shipwreck or sickness prevented his going. However, he did journey to Egypt in 1219, where he tried to convert the Sultan to the Christian faith. In later life he spent some time in revising the simple rules by which the order was first governed, and this revision has continued over the years to adapt the movement to changing times. It was at this time too (about 1221) that he formed The Third Order of Brothers and Sisters of Penance, designed for lay people who, without taking vows or leaving their homes and families, were prepared to adopt the principles of the Franciscan way of life.

xxxxxIn 1224, at the age of 42, he is said to have had a further mystical experience whilst at prayer, during which he received the stigmata, the marks upon his body of the five wounds suffered by Christ at the crucifixion. He took the greatest care to hide these sacred marks and so they were not discovered until after his death two years later. He died in the Chapel of the Little Portion, the Portiuncula, on the plain just below Assisi, and was finally laid to rest in the crypt of the Basilica of San Francesco that was erected in his memory in the west part of the city. He was made a saint in 1228 by his friend Pope Gregory IX, and the patron saint of ecologists by Pope John Paul II in 1980. 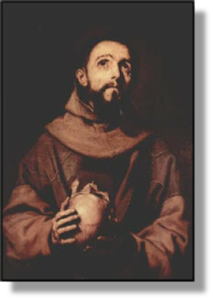 xxxxxToday, St. Francis is particularly remembered as a man who loved all living things and had the ability to tame and charm wild animals. Perhaps more important, however, is the example of his life in the service of the Christian faith. Probably no one in history has ever made such a devout attempt to tread in the footsteps of Christ, both in the style of his ministry and the simple message he preached.

xxxxxThe Franciscan order of friars that he founded remains to this day one of the most important movements of the Roman Catholic Church. As we shall see however, the movement became bitterly divided following the death of their great leader Bonaventure in 1274. It was not until 1325 that the then pope, John XXII (1318 E2), managed to bring an end to the dispute. 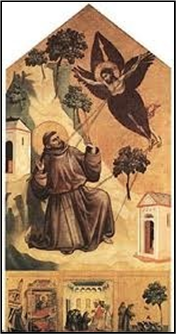 xxxxxIncidentally, the life and work of Saint Francis has inspired many artists over the years. Among those who decorated the interior walls of the Basilica of San Francesco was the Italian artist Cimabue. He painted frescoes of New Testament scenes in the upper Church of the Basilica. A beautiful series of 28 scenes taken from the Saint's life was originally thought to be the work of Cimabue's brilliant pupil, the Florentine artist Giotto, but some doubt has since be raised as to whether these painting were by him. But a work which is attributed to Giotto - St. Francis Receiving the Stigmata - originally painted for the church of Santa Croce in Florence (illustrated here), can be seen in the Louvre Museum in Paris. And worthy of note is the charming and detailed work of Bonaventura Berlinghieri, an Italian painter from Lucca. Around about 1235 he painted detailed and moving scenes from the life of the Saint, including the receiving of the stigmata, for an altarpiece in the church of San Francesco at Pescia, Tuscany in central Italy.

xxxxxThe order of Franciscan nuns was founded by Clare of Assisi (1194-1253). Known as the Poor Clares, they followed the same rules as their brothers, but led a cloistered life of prayer and penance. During her life she was credited with a number of miracles, and was made a saint 2 years after her death. 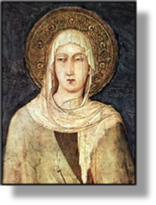 xxxxxIn 1212 an order of Franciscan nuns was founded by Clare of Assisi who, at the age of 17, received her vows from Francis in the Portiuncula Chapel below the town. Many joined her, including her mother and sister, and they were housed in the convent of San Damiano at Assisi. Known as the Poor Clares, or the Order of St. Clare, the nuns followed the same strict code of conduct as their brothers, but led a cloistered life of prayer and penance. Officially, the nuns made up the Second Order of St. Francis.

xxxxxClare became abbess of the convent in 1216, and during her life there she was credited with a number of miracles, including two in which prayer saved the convent from enemy attack. During her last illness it is said that she saw and heard the Christmas midnight mass which was being held at the Basilica of San Francesco on the other side of Assisi. It is for this reason that, in 1958, Pope Pius XII declared her the patron saint of television. She died in 1253, and was made a saint two years later.