xxxxxThe sensitive love epic Tristan und Isolde was the one and only major work of the German poet Gottfried von Strassburg. Although left unfinished in 1210, its quality marks him out as one of the great German poets of the Middle Ages. Based on the work of a French troubadour, this tender, idyllic love story came to inspire many writers and musicians, including the German composer Richard Wagner, whose opera of that name was produced in 1859. Among other Minnesingers of this time were the Irish and Welsh bards, and the wandering minstrels of Medieval England. In Germany these survived into the 15th century as Meistersingers, and they were to provide another theme for Wagner. 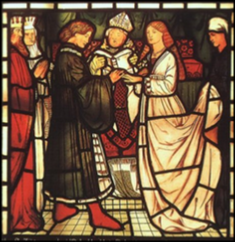 xxxxxThe German poet Gottfried von Strassburg is accredited with only one major work, his unfinished love epic Tristan und Isolde, but by the quality of this one poem he has come to be regarded as one of the great German poets of the Middle Ages. Based on the Anglo-Norman version of a French troubadour called Thomas of Brittany, it treats courtly love with an intensity and a sensitivity not captured before in song or verse. Adulterous though this love might be, it is presented as the ideal of courtly romance, justified by its depth and passion. And this idyllic concept is heightened and enhanced by the refined, melodious quality of the poetry itself.

xxxxxLittle is known of Gottfried's life, but he is thought to have been born about 1170, probably in Strassburg - and to have died in 1215. The learned references in his work would suggest that he was a well-educated man, and one who was associated with the higher ranks of society if not of noble birth himself. His tender version of this idyllic love story, written around 1210, was to inspire many, but none more so than the German composer Richard Wagner, whose opera based on this great courtly romance was produced in 1859. 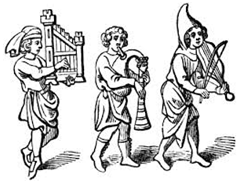 xxxxxGottfried can be numbered among the Minnesingers of this time. These were the singers of the Minnesang or love lyric, and can be likened to the French troubadour, the Irish and Welsh bard, and the wandering minstrel of Medieval England. Famous among these itinerant poets and musicians were Walter von de Vogelweide, Heinrich von Veldeke, Hartmann von Aue, and Wolfram von Eschenbach. In Germany the tradition of the wandering poet, singer and musician was continued into the fourteenth and fifteenth centuries by the Meistersingers, or Master Singers - and this was to be another theme used by Wagner.

The Marriage: stained-glass window by the Pre-Raphaelite artist Edward Burne-Jones (1833-1898), 1862, originally designed for the Music Room at Harden Grange, Bingley, Yorkshire, the then home of the textile magnet Walter Dunlop – Bradford Art Gallery, Yorkshire, England. Minstrels: from Scenes and Characters of the Middle Ages by the English antiquarian Edward Lewes Cutts (1824-1901), 1872 – eBook, The Project Gutenberg.