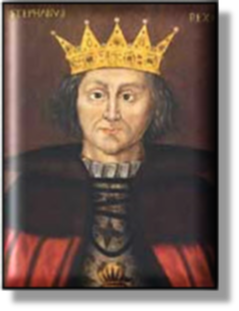 xxxxxThe death of Henry I soon plunged England into civil war. His nephew, Stephen of Blois, having earlier acknowledged that Matilda, Henry I's daughter, was the rightful heir to the throne, slipped across the Channel and had himself proclaimed King. In this he was readily supported by the vast majority of barons and bishops in both England and Normandy. They had no wish to have a woman on the throne and certainly not one who was married to Geoffrey, the Count of Anjou.

xxxxxBut Stephen's coup d'état was roundly opposed, not only by Matilda herself but by her husband, the Count of Anjou, her half-brother, Robert of Gloucester, and her uncle, King David of Scotland. The civil war that ensued, therefore, was a messy and long affair. The whole country was thrown into turmoil for nearly all of Stephen's reign. Indeed, his throne was not secure until 1153, the year before his death.

xxxxxA contributory factor to this sad situation was Stephen himself. He lacked firm leadership and this allowed his barons a free hand in England and, to a lesser extent, in Normandy. Many took the opportunity of enlarging their own lands at the expense of their neighbour, whilst in the bitter struggle for the throne many were willing to support the highest bidder. In 1138 the Earl of Gloucester took up arms in support of his sister, and in the following year Matilda herself invaded England, landing near Arundel. For a short time she was besieged in the castle there but then Stephen, taking chivalry a bit too far, allowed her to join her brother in the West Country. Meanwhile in the same year King David, one of the most powerful of Scottish kings, invaded from the north and, fortunately for Stephen, was defeated at the Battle of the Standard, near Northallerton in Yorkshire. 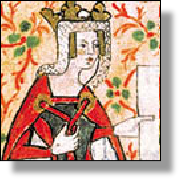 xxxxxThen in 1141 Matilda (illustrated) came very near to success. In the February she defeated the king's forces at the Battle of Lincoln, captured Stephen and imprisoned him in Bristol. The throne seemed within her grasp. Having had herself elected "Lady of the English" by a council of clerics at Winchester, she hurried to London in June to prepare for her coronation. But there, by her arrogant behaviour and constant demands for money, she lost the support of the citizens of the city, a support which was vital to her cause. She made a hasty retreat to Oxford and then in the September her forces were severely defeated at Winchester. Stephen was released and restored to power. He besieged her stronghold at Oxford and she took refuge in the castle there. It was from here that in December 1142, lacking food and comfort, she made her famous escape, fleeing across the frozen waters of the Thames, dressed in white so that she would not be easily seen. It is said that Stephen, gentleman that he was, knew of her plan and allowed her to escape!

xxxxxAfter some inconclusive fighting, Matilda retired to Normandy in 1148 and never returned to England. But now another, more powerful contender to the throne had arrived on the troubled scene, Matilda's son, Henry Duke of Normandy. He had come to England in 1147 but had met with little support. However, his second visit in 1153 was quite a different matter. By this time Stephen was tired and dispirited, and in November, following the death of his son Eustace, an agreement was reached at Winchester whereby Stephen recognised Henry as his heir. An end to the turmoil was in sight. A year later Stephen died and Matilda's son became Henry II, the undisputed king of England and Normandy.