xxxxxThe Benedictine monk Gratian is mainly remembered for his The Harmony of Contradicting Laws. Produced in 1143, it contained 3,800 texts covering all aspects of church discipline. A valuable textbook in defining and regulating church law, it is not surprising that it earned him the title "The Father of the study of Canon Law", or that it was studied as a foundation course in Universities. 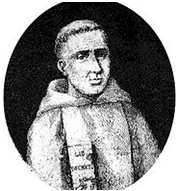 xxxxxGratian was a Benedictine monk. Little is recorded about his life, but it is known that he was teaching at the Monastery of the Saints Felix and Nabor at Bologna when he completed his major work, probably about the year 1143. Entitled the Concordia discordantium canonum it was a vast and remarkable collection of canon law - the legislation which regulated the discipline of the Roman Catholic Church. Consisting of some 3,800 texts covering all aspects of church discipline - such as marriage, penance, ordinations, heresy - it attempted, as none had done before, to analyse the conflicting principles which had arisen over the years, and to reconcile them into a format which could be acceptable to his time. Indeed, the very title of his treatise explains what he accomplished - that is, "The Harmony of Contradicting Laws". 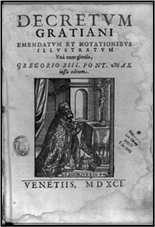 xxxxxIt is hardly surprising that this work became known as the Decretum Gratiani, or that it should earn him the title of "the Father of the study of Canon Law". From this time onwards, canon law became a new and distinct branch of learning, a separate study from that of theology. The work very soon became a basic textbook, used as a course foundation, for example, in the emerging university schools of Bologna, Paris, Oxford and Padua. In addition, at the papal court at Rome, it was used as the manual for canon law, parts of it surviving to be incorporated in the updated version compiled in 1917.