xxxxxThe Toltecs dominated much of today's Mexico from the tenth to the middle of the twelfth century. From their capital at Tula they established a network of trade routes across an empire which stretched as far south as Costa Rica. In 987 they expanded northward into Yucatan and, with the aid of the Itza, a Mayan people, set up another large state centred on the city of Chichen-Itza. This centre, and Tula, were built on a gigantic scale, and controlled a highly efficient commercial empire - the New World equivalent of the ancient civilisations of China, Egypt and Mesopotamia. Around 1120, however, nomadic peoples began to invade the outlying areas, and by 1151 these attacks and a long period of famine brought about the collapse of the empire. The main invaders were the Chichimec, a collection of tribes which included the Aztecs. As we shall see, it was this tribe which eventually seized power in the area in around 1325 (E2) and built their capital Tenochtitlan on similar lines to Tula and Chichen-Itza.

xxxxxThe Toltecs were an ancient people who dominated a vast area of Central America - covering much of what is now called Mexico - from the tenth until the middle of the twelfth century. Their capital and religious centre was established at Tula, possibly on a site some fifty miles north of present-day Mexico City. Not a great deal is known about these people, but among those who claimed descent from them were the Aztecs, and it was they who told their Spanish conquerors about the Toltec Empire (see map). 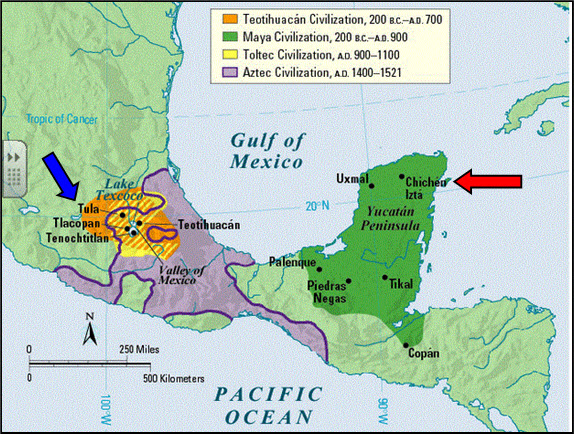 xxxxxThe warlike Toltecs probably came into the Valley of Mexico some time in the late seventh century. Having destroyed the ancient city of Teotihuacan, once the hub of a vast political and commercial empire, they set about establishing a network of trade routes, centred on Tula, (arrowed on map) which by the tenth century stretched out as far south as Costa Rica. In 987 it would seem, led by their King Quetzalcoatl, they expanded their empire into the northern area of Yucatan (south-east Mexico), establishing another large state based on the city of Chichen, a centre already important and famous for its worship of the rain god. Whether the Toltecs came as friend or foe is not clear, but aided by the Itza, a Mayan people then showing an interest in the area, they developed the city into their capital of Chichen-Itza (arrowed on map above), and built it in a style very similar to that of Tula. 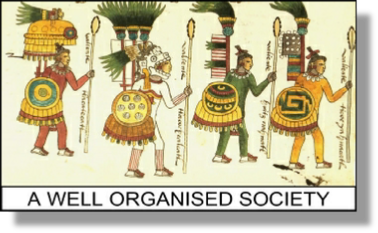 xxxxxAt the height of the Empire's power, Tula, Chichen-Itza and, one must mention, the centre at Xochicalco, were built on a grand scale. The vast stepped pyramids - temples to their gods - and the gigantic statues, great halls and highly decorated palaces, together with the massive hallways, flanked with stone colonnades, were ample enough proof of the vision and skill of the Toltec builders. Likewise, evidence of fine metalwork, human and animal figures detailed in stone, and painted and sculptured friezes testify to the outstanding ability of their craftsmen. Add to this their organised system of government, the efficiency of their military machine, and their lively interest in trade, and it is not surprising that historians have seen in this empire - and others prior to the arrival of the all- conquering Spanish - the New World equivalent of the ancient civilisations of Mesopotamia, Egypt and China. 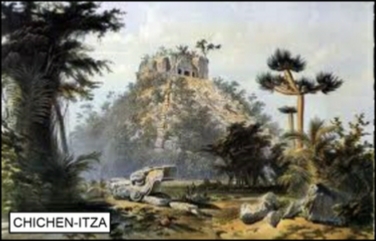 xxxxThe end of the empire came slowly and there is some doubt about the actual date of its demise, but it is generally thought to be about 1151. The gradual invasion of nomadic people from surrounding areas, starting about 1120, combined with serious famine over a number of years, brought revolution and a gradual breakdown of law and order. The newcomers had no kinship with or allegiance to the Toltec people and, indeed, some of them openly supported Cholula, a rival state to the south. However, the main invaders, it would seem, were the Chichimec, several tribes of nomadic Indians who invaded from the north and brought the tottering empire to its end. As we shall see, among these tribes were the Aztecs (see map above), and when they eventually came to power in this area in around 1325 (E2), the architecture of their capital city Tenochtitlan, founded in 1325, bore a striking similarity to that of Tula and Chichen-Itza.

xxxxxIncidentally, the breed of dog known as the Chihuahua, named after a Mexican state, might well be derived from the Techichi, a small mute dog kept by the Toltec people. It is not known why this particular dog was favoured by them, but the Toltecs did practise human and animal sacrifice and so the Techichi may well have been used in ritual ceremonies.