xxxxxPeter Lombard, the Italian theologian, begins writing his Four Books of Sentences in 1148 and completes them in 1151. A collection of Christian doctrine taken from the Scriptures and the teachings of the Church fathers, these books had a considerable influence on Catholic thought over the next three centuries and, with others, were used as source material by the Italian philosopher Thomas Aquinas. 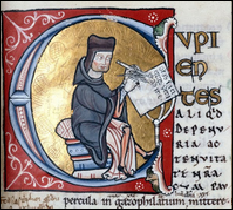 xxxxxThe Italian theologian Peter Lombard spent his early years in Bologna but then went on to study at Rheims and Paris. On completion of his training, he taught for some years at the school of Notre Dame in Paris, and was consecrated Bishop of Paris just over a year before his death.

xxxxxA man of remarkable talent, his reputation and fame rests mainly upon his compilation of the Four Books of Sentences, begun in 1148 and completed in 1151. This work, which earned him the title "Master of the Sentences", was an orderly collection of Christian doctrine taken from the Scriptures and the teachings of the Church fathers. As such it proved an invaluable textbook for students in theology, and was widely used in universities over the next 350 years or more. Over this long period hundreds of scholars produced commentaries on various aspects of its content, including the Italian philosopher Thomas Aquinas in the next century. 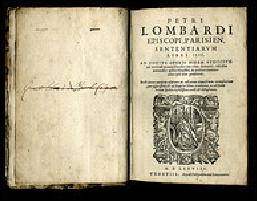 xxxxxAmong the many subjects discussed in this comprehensive work are the trinity, creation, the incarnation of Christ, the fall of man, evil, and the four last experiences: death, judgement, hell and heaven. Of special importance and worthy of note is his explanation of the concept of the sacraments. The work has not been without its critics, notably from traditional theologians, but it clearly stood the test of time and, as a result, had considerable influence on Catholic doctrine over many years.

Lombard: manuscript of 1158 in The Prologue to the Sentences, artist unknown – Municipal Library of Troyes, France.