xxxxxThe French sculptor Gislebertus learnt his skill at the Abbey of Cluny, but he is best remembered for his work at the cathedral of Saint-Lazare at Autun, completed around 1135. Most remarkable there is his Last Judgement in the western doorway. Executed in high relief and frightening in its depiction of hell, it is in sharp contrast to his portrayal of Eve in the northern doorway. Considered his masterpiece, this shows her as a composed, reclining nude. His work had a decided influence upon his craft. 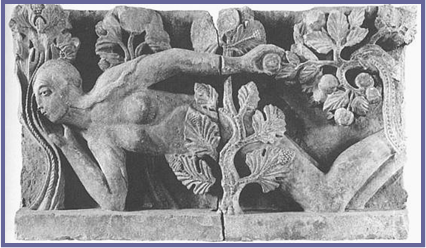 xxxxxThe Frenchman Gislebertus learnt his skill as a sculptor at the Abbey of Cluny and traces of his work are still to be seen on the western doorway there. Thus by the time he arrived at Autun in 1125 he was already an accomplished craftsman. From then until 1135, he produced some fine sculpture throughout the cathedral of Saint-Lazare - notably his decoration of the interior capitals - but his finest work was undoubtedly achieved at two of the entrances to the church. 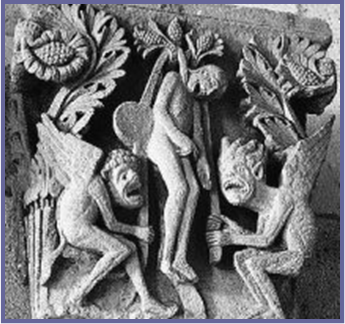 xxxxxHis Last Judgment in the western doorway, (part illustrated left) depicts Christ in the centre with hell and the damned on one side and heaven and the saved on the other. Executed in high relief, some of the figures have an avant-garde abstract quality, whilst the frightening scenes depicting hell and damnation contrast vividly with his soft, sensitive handling of Christ as a child, represented elsewhere. In the northern doorway is his Eve (illustrated above). Shown as a nude, reclining figure, it is remarkable for its composition and skill in execution, and is regarded by some as the sculptor's masterpiece. Gislebertus is one of the few French Romanesque sculptors known by name, and his style, moving away from the norm in certain respects, had an important influence on the future of his craft.