xxxxxAs we have seen, the capture of Jerusalem by the First Crusade in 1099 (W2) was a triumph for militant Christendom, but by 1144, when the Turks captured the town of Edessa, the Holy Land was again under threat. A second crusade was called for and, due in large measure to the powerful preaching of Bernard de Clairvaux, the response was enormous. It thus got off to a promising start in 1147, led by the French and German kings, but it ended in failure and humiliation. The German army, tired and depleted after its long journey, was virtually annihilated on reaching Anatolia, and the French force, likewise reduced in size and poorly led, failed to capture Damascus and decided to turn for home. However, as we shall see, the crusading spirit was rekindled in 1187 (H2), when the Muslims, led by Saladin, stormed and recaptured Jerusalem. 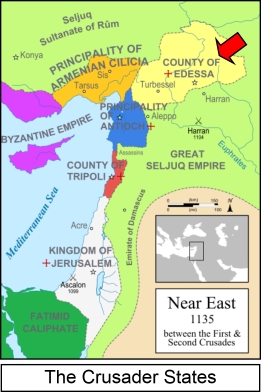 xxxxxThe Crusaders had been under threat ever since their capture of the Holy City in 1099 (W2). In the early years of the Kingdom of Jerusalem they achieved some success in consolidating their position in Palestine, taking the coastal towns of Acre, Tripoli and Beirut, and forming Orders of Knights to strengthen their garrison. But despite reinforcements and naval support from Genoa and Venice, the Turks began to gain ground. In 1144 they suddenly attacked the city of Edessa in the north (arrowed on map) and slaughtered its inhabitants. Help was desperately needed from the West.

xxxxxUrgent pleas for support soon reached the pope, Eugene III, and in 1145 he called for a second crusade. Again, the response was immense, due in large measure to the powerful preaching of the French monk Bernard of Clairvaux. As before, many simple peasants with no battle experience flocked to the cause but, this time, they were joined by the powerful armies of two European monarchs, Louis VII of France and Conrad III of Germany. Hopes were high and confidence knew no bounds as the two kings and their large, impressive armies set out for the Holy Land in 1147.

xxxxxBut this crusade proved a total failure. Conrad III reached Constantinople first (blue line) and, with an army weakened by fatigue and lack of provisions, he plunged straight into Anatolia. The Saracens

were waiting for him and at the Battle of Dorylaeum his army was virtually annihilated. Conrad was among the few survivors who escaped and managed, eventually, to join the forces of Louis VII.

xxxxxBut the French king fared no better. Having finally reached Jerusalem after an arduous journey along the coast from Ephesus to Antioch (red line), there was much debate and much dissension between the crusaders and the city's barons. Eventually it was agreed to attack Damascus, a prize worth having, but the planning was poor and the execution of it even worse. The city was besieged for five days but, on learning of the advance of a large Muslim force to relieve the garrison, the crusaders, already beset with disease and starvation, just cut and run. Many were killed as they made their retreat. The second crusade was over. Losses had been heavy, and nothing had been achieved.

xxxxxThe fact that the crusade of 1147 began with such high hopes made its failure so much more devastating. For a time, at least, rescue missions on such a grand scale were openly discouraged, despite the growing hostility of the Muslims throughout the Middle East. But, as we shall see, the crusading spirit was revived with a vengeance towards the end the century with the emergence of a powerful Muslim leader, Saladin, and his recapture of Jerusalem in 1187 (H2).