xxxxxThe Almoravids, as we have seen in 1076 (W1), were a Berber people who, having defeated the Kingdom of Ghana, crossed into Spain in 1086. They defeated Alfonso VI at the Battle of Zalaca and within 25 years were masters of Muslim Spain. In the meantime, however, a more fanatical Muslim people, the Almohads, had arisen in Morocco. Having captured Marrakesh in 1147, they overthrew the Empire of the Almoravids, and then moved into Spain. As we shall see, they won a decisive victory over the Christians in 1196 (R1) and were able to extend their hold over all of southern Spain. 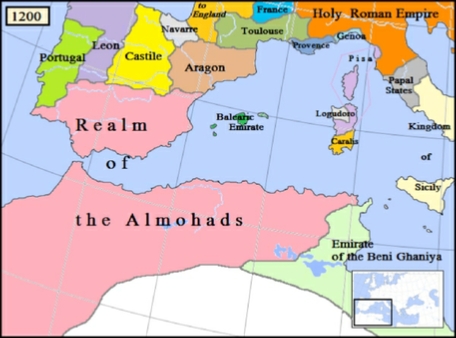 xxxxxAs we have seen in 1076 (W1), the Almoravids were a Berber dynasty originating in the western Sahara about 1035. A warlike people and fanatical in their Muslim belief, they started to push into Morocco in 1059. In about 1076 they crossed the Sahara and defeated the wealthy Kingdom of Ghana. This greatly added to their strength, and by 1082, under the leadership of Ibn Tashufin, their rule had been extended as far as Algiers. Meanwhile in Muslim Spain central leadership had collapsed and the whole region had broken up into small principalities, each one too weak to stand up against the growing strength of Christian forces bent on regaining lost ground. Such a threat was banged home in 1085 when Alfonso VI, king of Leon and Castile, attacked the Moors and captured the stronghold of Toledo. Following this serious defeat, the Almoravids were asked for their assistance and their army crossed into Spain the following year and promptly routed a Christian army under the command of Alfonso VI at the Battle of Zalaca. By 1110, four years after the death of Ibn Tashufin, virtually the whole of Muslim Spain was in their hands.

xxxxxBut, having conquered Muslim Spain, the rule of the Almoravids was not destined to last for long. The Empire was soon beset with problems. At home, in North Africa, there was growing opposition to their particular interpretation of the Islamic faith, whilst in Spain they succumbed to the good life and found it increasingly difficult to repulse attacks by the Christian kings. The challenge to their rule began 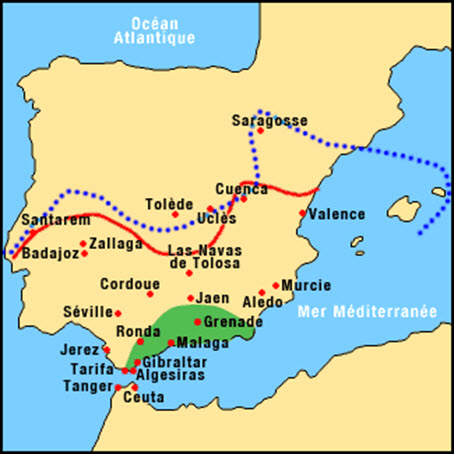 in 1124 when Muhammad Ibn Tumart, a Berber from a tribe in the High Atlas region of Morocco, formed the Almohads, a religious community opposed to the Almoravids. He died in 1130, but his mission was continued by Abd al- Mu'min, an able disciple. Having mustered an army of fanatical followers, he invaded Morocco and Algeria, and by 1145 felt strong enough to attack the heartland of the Almoravid Empire. His forces conquered Fez the following year and then in 1147 brought down the enemy by the capture of their capital, Marrakesh. Having destroyed the Almoravid power base, the Almohads showed less urgency in their conquest of Muslim Spain, but when Seville was forced to surrender in 1172 they quickly extended their rule over the whole of the Moorish territory. Here their Muslim fanaticism led to the forced conversion or massacre of the Jews.

The green area shows the boundary of the Muslim possessions at the end of the Almohad dynasty.

As we shall see, the Almohads consolidated their hold on the peninsula with a decisive victory over the Christians in 1196 (R1), but their empire was eventually destroyed by the Christian kings of Spain in the following century, first in Spain itself and then in Morocco, the homeland of its people.