xxxxxThe Moroccan geographer Mohammad Al-Idrisi travelled extensively in North Africa and south-west Europe before settling in Palermo at the court of the Norman king, Roger II. Here in about 1138 he began his major work, a brilliant, detailed map of the world in seventy sections - covering Europe, Asia and North Africa - and this remained the most accurate atlas of the world for some 300 years. Accompanying this colossal work was The Book of Roger, a compendium of knowledge about the geographical, political and cultural conditions prevailing in each of the sections into which his world map was divided. It was partly based on his own travels, but supplemented from Arabic and Greek sources, and from information received from merchants, travellers and explorers who visited Sicily at this time. And roving reporters were also sent out to confirm details or gather new facts. Dedicated to his patron the king, it was completed in 1154 and, for its time, was a remarkable piece of scholarship. 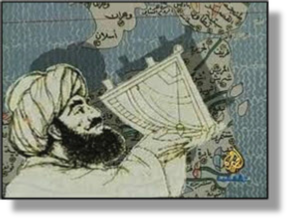 xxxxxThe Arab traveller and geographer Mohammad Al-Idrisi, a descendant we are told of the Prophet Mohammad, was born in Sabtah - now the Spanish possession of Ceuta on the coast of Morocco. In his early years he travelled extensively throughout North Africa, the Mediterranean, Anatolia and parts of south-west Europe - including Portugal, Spain, western France and southern England. In about 1138 he settled in Palermo, Sicily where he joined the brilliant court of the Norman king, Roger II. It was here that he produced his remarkable map of the world, commissioned by the king. Divided into seven climatic zones and then sub-divided into ten equal parts, it provided, for its time, an astonishingly detailed coverage of Europe, Asia and North Africa. Showing all the major features - such as cities, rivers, lakes, mountains and trade routes - it remained the most accurate map of the world for some 300 years. On completion, Roger had it engraved on a planisphere, a huge silver disc which was nearly six feet in diameter and weighed more than 300 pounds.

xxxxxAnd this monumental creation was accompanied by his Tabula Rogeriana (The Book of Roger), an equally impressive piece of work, written in Arabic. Designed as “a pleasant journey into faraway lands” for one who is “eager to traverse the regions of the world”, it provided a detailed account of the physical, cultural and political conditions prevailing in each of the seventy sections into which his map was divided. The fund of knowledge contained in this compendium was compiled from his own observations during his long years of travel, and supplemented by data from Arabic and Greek sources, and information gleaned from the large number of travellers, merchants and explorers who visited Sicily at this time. In addition, he and the king sent out a number of skilled men whose job it was to visit various countries and report back on their findings. 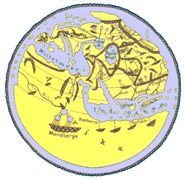 xxxxxHis book was completed in January 1154, just a short time before the death of his benefactor. It is not without its inaccuracies - and this is hardly surprising - but it covers a great deal of ground, shows, for the most part, a real attempt to get at the facts, and, for its time, must be regarded as a remarkable piece of scholarship. But his research was not confined to these two outstanding works. He showed an interest in medicine, produced a book about drugs, and was a poet of some standing if one is to judge by the quality of the small amount of his verse that has remained.

xxxxxThe planisphere has long since been lost, but ten manuscript copies of his map and textbook have survived. The most complete version is held in Istanbul, but there are also copies in Cairo, the French national library, and the Bodleian Library in Oxford, England.