xxxxxIt was in 1137, when he was prior at the monastery of Brescia, that Arnold first attacked the wealth and corruption of the Church and the part played by the Pope in secular matters. Two years later his views were condemned by the Second Lateran Council and he was banished from Italy. He spent a while in France where he met up with the French theologian Peter Abelard - a fierce critic of Church doctrine - and both were declared heretics by the Council of Sens in 1141. Again exiled, he went to Rome where, showing great courage, he renewed his attack upon the Catholic Church. He was excommunicated in 1148 and, six years later, having been captured by forces of the Holy Roman Emperor, he was hanged as a political agitator. 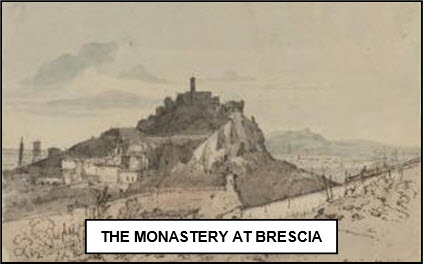 xxxxxThe Italian Arnaldo da Brescia studied in Paris and became an Augustan monk. He came to the notice of the Church authorities when in 1137, as prior at the monastery at Brescia, northern Italy, he joined a popular revolt against his Bishop, criticising clerical wealth and corruption, and strongly opposing the power of the Pope in secular matters.

xxxxxThese views being condemned at the Second Lateran Council in 1139, his books were burnt and he was banished from Italy. Travelling to France, he became a supporter of the theologian and philosopher Peter Abelard, who was himself in disfavour for his controversial views on the doctrines of the atonement and trinity. Both were condemned as heretics at the Council of Sens, in France, held in 1141, their main antagonist being the strict conformist Bernard of Clairvaux. 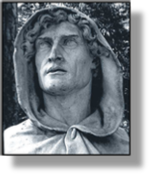 xxxxxAbelard tended to submit, but Arnaldo (illustrated) continued to voice his views and was again exiled. Taking refuge in Germany, he was reconciled with Pope Eugene III but, on being sent on a penitential pilgrimage to Rome, he once again called for clerical reform and the abolition of papal power in temporal matters. As a result, he found himself head of a political group that managed to force Eugene into exile. He was excommunicated in 1148. Six years later, being captured by the forces of the Holy Roman Emperor Frederick I - who happened to be in Rome for the Emperor’s coronation - he was tried by an ecclesiastical tribunal and condemned to death as a political rebel. After being hanged, his body was burnt and his ashes thrown into the River Tiber.

xxxxxA man of firm faith and temperate living, he showed immense courage as a religious reformer, but by attacking the role of the Pope in the affairs of the state he opened himself up to secular charges, and it was as a political agitator that he met his death.

Monastery at Brescia: by the British artist Charles Francis Annesley (1787-1863). Arnold of Brescia: detail from a statue in Pincio Gardens, Rome, date and sculptor unknown