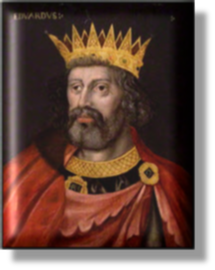 xxxxxUnlike his father, Edward II proved to be a worthless, incompetent monarch. He depended entirely upon the advice of frivolous or ambitious favourites, and this brought him into almost constant conflict with his discontented barons. It is perhaps fitting that his reign is best remembered for the enormous beating his army received at the hands of the Scots in the famous Battle of Bannockburn in 1314. In fact, however, this was but one failure among many.

xxxxxHe was born at Caernarvon Castle in 1284, and it was there in 1301 that he became the first heir to the throne to be created Prince of Wales. At the very beginning of his reign, the appointment as his chief advisor of the arrogant Piers Gaveston, one of his favourites and a possible lover, at once alienated most of his barons. In 1311 they formed a committee bent on ridding the realm of Gaveston and righting a number of grievances, some of them dating back to the previous reign. Known as the Ordainers, twenty-one in number, they took all power unto themselves and, having twice failed to exile Gaveston, had him executed in 1312.

xxxxxIt was soon after this that Edward was obliged to muster a large army to quell the rebellion of the Scottish king, Robert Bruce. Having returned from his hideout on the Isle of Rathlin in 1307, Bruce had mustered a great deal of support and, after capturing most of the English strongholds in Scotland, was organising raids across the border. Edward made for Stirling, where one of his few remaining garrisons was under siege, but he was met by the Scottish army just south of this city at the site of a stream called Bannockburn. Here, Bruce had taken up a good defensive position, and despite being outnumbered by three to one, his army inflicted a crushing defeat upon the English force, and virtually ensured Scottish independence.

xxxxxFollowing this military disaster, Edward took little part in government. For the next seven years the administration of the realm was in the none-too-capable hands of his cousin, Thomas, Earl of Lancaster. Meanwhile the king had found two new favourites, the Hugh Despensers, father and son. Ambitious for power they supported Edward in a bid to oust Lancaster and managed to defeat him at the Battle of Boroughbridge, Yorkshire in 1322. He was executed and many of his followers slaughtered. Then the Despensers, having summoned Parliament and abolished the Ordainers, virtually took over the running of the country

xxxxxFortunately, this unhappy reign was brought to an end five years later by Edward's estranged wife, the redoubtable Isabella. She joined up with the king’s enemies on the continent and, with her lover and leader of the force, Roger Mortimer, invaded her own country in 1326! The Despensers were caught and executed, and the king was deposed in favour of his son, crowned Edward III in January 1327, aged fifteen. Now stripped of his authority, Edward was imprisoned in Berkeley Castle in Gloucestershire, where he was murdered the following year, probably brutally and presumably on the orders of Roger Mortimer.

xxxxxIncidentally, when Edward II was crowned, the barons added a new clause to the king’s oath. He swore to observe the just laws and customs that “the community of your realm shall determine”. And again, after the execution of Thomas, the Earl of Lancaster, the Despensers dismissed the Ordainers on the grounds that they had not been elected by “the community of the realm”. This term could be interpreted as meaning not merely the barons and upper clergy, but also representatives of the towns and shires, and, as such, it was a welcome if but small nudge forward in the long, uphill struggle towards democratic reform.