xxxxxWorthy Popes there had been, like Gregory VII, Urban II and Alexander III, but by the beginning of the 14th century the papacy was at an all-time low. In 1303, for example, the French king Philip IV had arrested and kept captive Boniface VIII. Six years later, in 1309, the Frenchman Pope Clement V decided to take the papacy out of Rome, where it was constantly caught up in quarrels between aristocratic families, and to establish it in the peace and quiet of Avignon in southern France. This exile, known as the Babylonian Captivity, was to last for 70 years. During that time the papacy fell increasingly under French influence - all the popes and most of the Cardinals were French -, and there was much opposition to the new situation outside of France. And then, as we shall see, when it did return to Rome in 1377 (E3), there followed the Great Schism when two and, at one time, three popes served at the same time and brought the Church into even greater disrepute.

xxxxxDespite their failings, under the leadership of men like Pope Gregory VII, - who fought his corner well in the protracted investiture controversy - and Urban II, who launched the crusade movement in 1095, the papacy was held in high esteem. And later popes, too, like Alexander III and Innocent IV, fought hard to maintain the supremacy of the pope over temporal as well as spiritual matters. Under their leadership the papacy had at least maintained its authority and dignity. 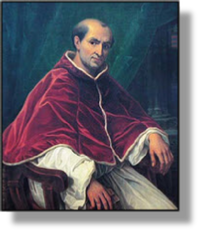 xxxxxBut by the beginning of the fourteenth century the prestige and power of the papacy had fallen to an all-time low. We have seen how in 1303 the French King, Philip IV, had threatened and then humiliated the pope, Boniface VIII, arresting him in his family home at Anagni and holding him captive. He died three weeks after his release, some say because of the ill-treatment he received at the hands of his captives. This “Outrage of Anagni” was soon followed by the abandonment of Rome as the papal capital. In 1309 the then pope, Clement V (illustrated), left Italy and took up residence in the French town of Avignon. This papal exile was to last for close on 70 years and came to be known - rather confusingly you might think - as the “Babylonian Captivity” - named after the 70 years of Jewish exile in Babylon in the 6th century BC. 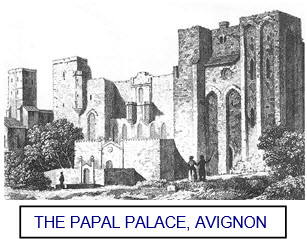 xxxxxPope Clement V was himself a Frenchman, and he was doubtless persuaded - if not forced - by Philip IV to make this move, but it must be said that for many years past successive popes had not resided full-time in Rome, mainly due to the bitter quarrels taking place there between powerful aristocratic families. And the situation in Rome had not been improved by Clement’s predecessor, Boniface VIII, who had carried on a running battle with one of these families, the Colonna. In the menacing climate then created, Avignon certainly offered the papacy a greater measure of peace and security.

xxxxxAt Avignon, of course, the papacy came under strong French influence, and it is hardly surprising that all seven Avignonese popes were in fact Frenchmen. (And of the 134 cardinals appointed during this period 111 were French!). It was here that Clement V was virtually forced by Philip IV to suppress the Knight Templars, in 1312, and to rescind the two major bulls issued by his predecessor, the Clericis Laicos and the Unam Sanctam, both of which had affirmed papal supremacy.

xxxxxThe papal stay at Avignon was not without benefit. During this period, the reorganisation of church administration and the reform of clerical conditions were achieved, and missionary work was also expanded, notably under John XXII. However, there was much opposition to this “captivity”, especially in 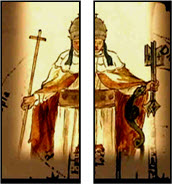 England and Germany, and this did much damage to the prestige of the papacy.

xxxxxFurthermore, as we shall see, when Gregory XI eventually took his court back to Rome in 1377 (E3) matters became worse. The following year saw the beginning of the Great Schism during which two, and later, three popes contended - squabbled - for Christendom’s top job, and heaped further scandal upon an already tarnished papacy.