xxxxxAs we have seen, following the death of William Wallace, Robert Bruce was crowned king of Scotland in March 1306 (E1). He was soon defeated in battle, but he managed to escape and returned to the fight in 1307, waging a constant guerrilla war against the forces of the new King, Edward II. Then in 1314 he won an outstanding victory at the Battle of Bannockburn. Despite being heavily outnumbered, his force of pikemen, bowmen and cavalry took up a good defensive position beside an area of marshland. Two cavalry assaults by the English failed, the horses foundering in the muddy terrain or proving unable to penetrate the wooden stakes and deep pits which made up the Scots’ line of defence. Then when a force of Scottish camp-followers appeared on the scene, the English, assuming them to be reinforcements, fled from the field, suffering 10,000 casualties. Despite the humiliating defeat suffered by the English, the war dragged on until 1328 (E3), when the Treaty of Northampton made Scotland an independent kingdom and Robert Bruce its king. 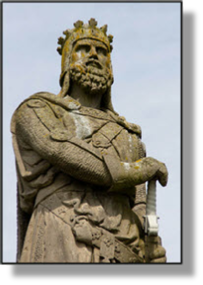 xxxxxAs we have seen, in 1306 (E1), following the capture and execution of the Scottish resistance leader William Wallace, Robert Bruce, a loyal subject of the English king, was selected as one of the four regents to govern the kingdom in the name of John Balliol. On the 10th February 1306, however, he got into a quarrel with John Comyn, a cousin of John Balliol and a possible contender for the throne. During their meeting, which took place in Greyfriars Church at Dumfries, Comyn was stabbed to death by Bruce. The motive for the killing was not difficult to find because Bruce then made straight for Scone Abbey and was crowned king of Scotland the following month.

xxxxxEdward I, you may remember, acted at once. He deposed Bruce and ordered his forces in Scotland to hunt the traitor down. They defeated Bruce in two battles in that year and captured many of his supporters and relatives, including his wife and three of his brothers. Bruce managed to escape, but was forced to flee the mainland, taking refuge on the little island of Rathlin off the coast of Antrim in northern Ireland.

xxxxxIn February 1307 Bruce returned to Ayrshire, hoping to drum up enough support to oppose and beat off the inevitable English challenge. But the challenge never came. Edward I mustered an army and travelled north to re-conquer Scotland but, on the way, he was taken ill and died at Carlisle in July, aged 68. The death of the “Hammer of the Scots” was good news for Bruce, made all the better by the succession of the feeble and inept Edward II. The fight for Scottish independence was to take a decisive turn for the better. 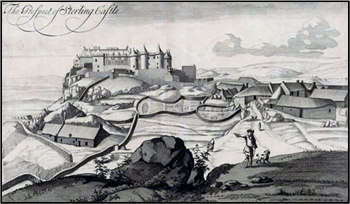 xxxxxFor the next few years Bruce waged a constant guerrilla war against the English garrisons in Scotland and those of his countrymen who continued to support the king of England. He won a number of skirmishes, took over most of the English strongholds, and even led attacks into northern England. Edward II was reluctant to follow in his father's footsteps, but eventually, when only Berwick and Stirling were left in English hands, he decided that some action was needed. In the spring of 1314 he led a large army into Scotland with the immediate aim of relieving the besieged castle at Stirling (illustrated). Bruce was waiting for him.

xxxxxThe two armies met just south of Stirling in June of that year. The English army, some 18,000 strong, consisted of a large cavalry force of about 2,000 and the best archers in Europe, and it outnumbered the Scots by something like three to one. The Scottish force was made up of pikemen, bowmen and just a few cavalry, but, under Bruce's guidance, it was drawn up in an area between a small stream, the Bannockburn, and the River Forth in a narrow opening bordered by dense woods or marshland. In addition, the forward area was protected with a mass of wooden stakes and deep pits (or pottées). These frontal defensive measures were crude, but they were to prove highly effective. 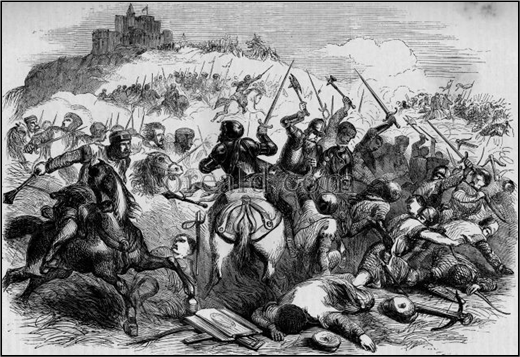 xxxxxEdward, anxious to reach a quick conclusion, made only a brief use of his archers before sending in his cavalry, but two waves of attack by the English knights ended in total failure. The horses floundered in the mud and fell into the pits. Then a large number of Scottish camp-followers appeared over a nearby hill and the English, assuming these to be reinforcements, broke rank and fled in disarray, suffering heavy casualties in the process. It is estimated that the English lost 10,000 men and the Scots less than half that number. And thus it was how Robert I of Scotland won an amazing victory, and how the English army suffered one of the most humiliating defeats in its long history.

xxxxxDespite this disastrous defeat, Edward refused to grant independence to Scotland and the war dragged on for fourteen years. In 1326, however, a Scottish Parliament was established, securing some measure of independence, and then, as we shall see, in 1328 (E3) Roger Mortimer, acting on behalf of the young Edward III, persuaded him to sign the Treaty of Northampton by which Scotland became an independent kingdom, and Robert Bruce became its king

xxxxxIncidentally, just before he died at Carlisle in 1307, Edward I - determined to the last to bring Scotland to heel - instructed his son that his bones were to be put in a casket and carried at the head of the English army until Scotland had been conquered. Edward II, sadly lacking the determination and fighting spirit of his father, did not continue the campaign, however, and his army returned home Whether he carried the casket on his fateful expedition to Scotland in 1314 is not known. In kindness to the memory of his father, the "Hammer of the Scots", we might hope that he did not! ......

xxxxx...... And speaking of caskets, Robert Bruce died in 1329 just a year after Scotland gained its independence. He was buried at Dunfermline Abbey but, following his wishes, his heart was removed, placed in a silver casket, and taken to the Holy Land by his friend Sir James Douglas. (Bruce had vowed to take part in a crusade but never fulfilled his vow). It is known that Douglas was killed on the way, fighting the Moors in Spain, but much doubt has been cast on the story that the casket was then recovered, brought back to Melrose Abbey and buried at the high altar. However, today a carved stone marks the place where the casket is said to be buried. ……

xxxxx…… During the English retreat from the battlefield Edward was very nearly captured. It is said that, as a thanksgiving for his escape, he founded Oriel College in Oxford in 1326. ……

xxxxx…… The year after Bannockburn, 1315, saw the start of a three-year period of severe famine in central and western Europe. Excessive rain in the spring and summer of 1315 ruined the food crops over vast areas. It is estimated that in many regions starvation and disease reduced the population by ten percent. 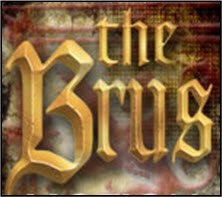 xxxxxThe Scottish poet John Barbour (c1325-1395) wrote a description of the Battle of Bannockburn in his national epic known as The Brus. Completed in 1376, this poem records the history of the Scottish struggle for independence, but the highlight of the work is undoubtedly his report of the battle, compiled from firsthand accounts. This historical epic, contained in no less than twenty books, is regarded as the first major work of Scottish literature. Its full title is The Actes and Life of the most Victorious Conqueror, Robert Bruce King of Scotland.