xxxxxThe great Italian poet Alighieri Dante is well known for the deep affection he felt for Beatrice Portinari, whom he first met at the age of nine. His passionate but unrequited love for her, which survived her marriage and tragic death at the age of 24, is movingly described in his La Vita Nuova, and was to prove an inspiration to him throughout his life. Following her death he immersed himself in local politics and, as a result, was forced to flee his native city of Florence, never to return. Thus his major works were written during his years of exile, and included the philosophical commentary entitled The Banquet, and his treatise on political theory On World Government, a work in which he attempted to solve the power struggle between Church and State. His magnificent masterpiece, The Divine Comedy, begun in 1307 and completed around 1314, is an epic account of his journey through hell, purgatory and paradise. Containing passages of great beauty and vivid imagery, it describes not only his own friends and acquaintances (including, of course, his beloved Beatrice), but also those he had read about in his study of Greek and Latin literature. This revival of learning, together with his humanistic approach and concern for the individual, mark him out as the first great writer of the Italian Renaissance. Among the many poets inspired by his work were the Italians Francesco Petrarch and Giovanni Boccaccio, and the Englishmen John Milton and William Blake. The Florentine painter Sandro Botticelli produced a series of brilliant drawings to illustrate The Divine Comedy, and later (1794 G3b), William Blake, as an artist, produced some highly imaginative scenes from this work. 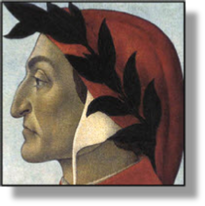 xxxxxThe Italian poet Alighieri Dante, one of the greatest figures in world literature, was born in Florence. His mother died at his birth or soon afterwards, and he was only in his teens when his father died. This might well account for his sadness of face and his melancholy disposition. It was in 1274, at the age of nine that he first met and fell in love with his beloved Beatrice, identified as Beatrice Portinari. His devotion to her survived her marriage to another man, and her tragic death in 1290 at the age of 24. Their meeting is described in his La Vita Nuova, a work in verse and prose, begun in 1283 and completed two years after her death. It is a moving and frank account in which he writes passionately about his unrequited love for the girl who was the embodiment of perfection and an inspiration to him throughout his life. (The portrait is by Sandro Botticelli).

xxxxxFollowing the death of Beatrice he became deeply and dangerously immersed in the troubled politics that beset the Florence of his day. He favoured and fought for the moderate section of the Guelph party, so that when the extreme faction, the Blacks, seized power in 1302, he virtually had to run for his life. Accused of crimes he had not committed, he was twice summoned to appear before the new Florentine government. When he failed to do so he was condemned to death by burning. This put an end to any hope of his returning to his beloved Florence, though he tried to reverse the sentence a number of times.

xxxxxThus Dante spent the rest of his life in exile, wandering from one city to another in central and northern Italy. It is to this long period of exile that most of his major works belong. For example, he began work on his influential treatise on the Italian language called Concerning the Vulgar Tongue in 1304, wrote a philosophical commentary in Italian entitled The Banquet, completed in 1308, and put forward his advanced political theories in his On World Government, written between 1311 and 1313. In the last named work, also known as De Monarchia, Dante attempts to solve the current controversy between church and state over spiritual and temporal authority. 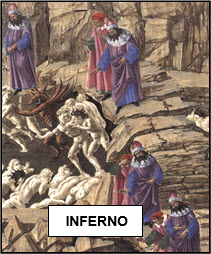 xxxxxHis masterpiece, the Divine Comedy, was begun in 1307 and completed around the year 1314. It is an epic account of a journey by Dante through hell, purgatory and paradise and he is accompanied for part of the way by the poet Virgil, sent by Beatrice as a guide. In this narrative poem, full of vivid imagery, profound learning and passages of great beauty, he describes not only the people he has met during his lifetime, but all those he has read about in his study of Greek and Latin literature. It is an epic book of the dead, tracing the journey of a soul after death, but it is also, in the metaphorical sense, a journey of Dante’s soul in life and its spiritual development. In this work he pays special tribute to his teacher, the scholar Brunetto Latini, and his close friend Guido Cavalcanti, the man who persuaded him to write his work in Italian. The illustration here - a detail from a glimpse of Hell - is one of the many produced by the Italian artist Sandro Botticelli. 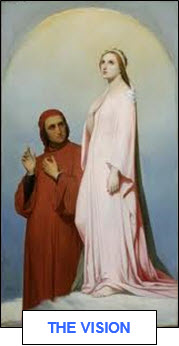 xxxxxThe journey begins on Good Friday in the year 1300 and takes Dante first to hell, where souls writhe in agony, then via the mountain of purgatory - where souls hopefully await salvation - to paradise itself. Here in heaven Beatrice leads him into God's radiant house from whence he can look down upon the tiny world below and the “foolish vanity of mortal men” upon it. 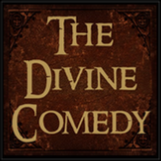 For status some, and some for empty praise

Are yearning; this man longs for heaps of gold;

That man, by folly driven, aspires to rule;

Another, yielding to the spur of greed,

xxxxxBy any standards, the Divine Comedy is a magnificent piece of work, and one of the outstanding masterpieces of world literature. Quite apart from the beauty of its verse and the vivid imagery it conjures up, Dante’s concern for the individual, his revival of learning, and his humanistic approach make him the first great writer of the Italian Renaissance. The English poet Percy Bysshe Shelley was later to sum it up well when he said that Dante’s poetry was like a bridge thrown over the stream of time, uniting the ancient and modern worlds.

xxxxxWe shall see that his pioneering work was continued in the first instance by such Italian writers as Francesco Petrarch and Giovanni Boccaccio, whilst another poet of individualism, Geoffrey Chaucer, was to provide the dawn song of a similar awakening in England. Looking further ahead, the Divine Comedy also inspired the English poets John Milton and William Blake. In the field of art, the Florentine painter Sandro Botticelli - as we have seen - produced a series of brilliant drawings to illustrate the Divine Comedy, and in 1504 the Umbrian artist Luca Signorelli (c1445-1523), inspired by the same work, completed a number of huge frescoes depicting hell, purgatory and heaven for the chapel of San Brizio in Orvieto Cathedral. Later, as we shall see (1794 G3b), came the highly dramatic and imaginative interpretations of the English visionary artist William Blake. 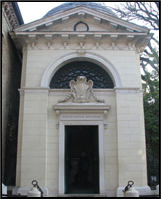 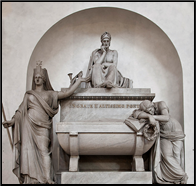 xxxxxIncidentally, Dante died in Ravenna in September 1321 and was buried there in a simple tomb in the present-day church of St. Francis. The authorities at Florence made several attempts to have the remains returned to their city, but the people of Ravenna would have none of it. Eventually in 1519, due to the intervention of Michelangelo, the pope did give permission for the transfer, but when the tomb was opened it was found to be empty. The local Franciscan monks had hidden his remains elsewhere in order to prevent their removal. They remained in Ravenna, and are housed today in a temple built by the Italian architect Camillo Morigia (1743-1795) in 1780 (illustrated left). Not to be completely outdone, in 1829 the Florentines built a tomb for Dante in the church of Santa Croce (illustrated right), but it still remains empty. It is a pity, you might feel, that Dante, who was never allowed to return to his beloved Florence in life, was not permitted to do so in death.