THE AZTECS AND THEIR CAPITAL TENOCHTITLAN 1325  (E2)

xxxxxAs we have seen, it was around 1151 (ST) that the Toltec Empire in modern-day Mexico began to break up, invaded by a number of nomadic peoples and weakened by a long period of famine. The main invaders were a group of tribes known as the Chichimec. Among these were the Aztecs. Advised by their God, the Hummingbird Wizard, they went into the valley of Mexico and quickly overran the Toltecs and other weak tribes in the area. Around 1325 they began building their capital Tenochtitlan on a marshy island at the western edge of Lake Texcoco. As they made use of ruins abandoned by the Toltecs, their buildings closely resembled those which the Toltecs had built at Tula and Chichen-Itza. As we shall see (1432 H6), it was to be these people, the Aztecs, who, over the next two centuries, were to establish a thriving civilisation and a vast empire in this region. 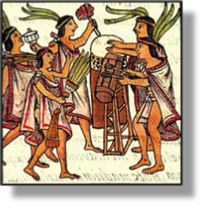 xxxxxWe have seen how the Toltec empire, in modern Mexico, began to go into decline about the year 1151 (ST). The gradual invasion of nomadic people from surrounding areas, starting about 1120, combined with serious famine over a number of years, brought revolution and a gradual breakdown of law and order. The newcomers had no kinship with or allegiance to the Toltec people and, indeed, some of them openly supported Cholula, a rival state to the south. However, the main invaders, it would seem, were the Chichimec, several tribes of nomadic Indians who invaded from the north and brought the tottering empire to its end. Among these tribes were the Aztecs and it was these people who 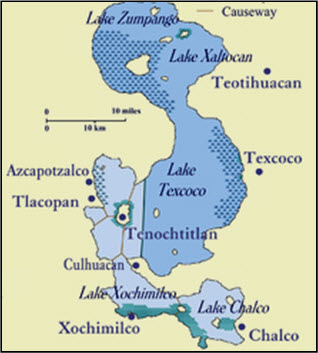 were destined to gain power in the area.

xxxxxThe Aztecs moved southwards into the valley of Mexico because, so the legend goes, they were advised by their god Huitzilopochtli (meaning Hummingbird Wizard) to make the journey. It proved good advice. An industrious farming and hunting people, they quickly subdued the Toltecs and then took control of the weaker tribes around them. In about 1325 they began reclaiming a marshy island near the western edge of Lake Texcoco. Here they built their capital Tenochtitlan (meaning the place of the high priest Tenoch). They inherited many of the ruins abandoned by the Toltecs so it is hardly surprising that the buildings in their new capital bore a striking resemblance to those which had once graced the Toltec cities of Tula and Chichen-Itza.

xxxxxAs we shall see (1432 H6), over the next two centuries, the Aztecs were to grow in power and prestige, establishing a thriving civilisation and an empire which covered the whole region. They were to be the undisputed masters of all they surveyed, but only until the coming of the Europeans in the early sixteenth century. This was to bring about the destruction of the Aztec Empire and its magnificent capital city of Tenochtitlan.

Illustration: contained in the Codex Florentine, the major part of The General History of New Spain, a 16th century ethnographic research project carried out by the Franciscan friar Bernardino de Sahagun (1499-1590), artist unknown. Map (Mexico): licensed under Creative Commons, by courtesy of the author Madmann2001 – en.wikipedia.org.