xxxxxThe Italian artist Giotto di Bondone was one of the first painters to break away from the stylized, two-dimensional figures of Gothic and Byzantine art. He gave his figures lifelike, rounded forms and put emotion into the faces of his subjects, emphasizing the human instead of the divine. Among his major works are a number of frescoes illustrating the Last Judgement in the Arena Chapel in Padua (completed in 1307), his Madonna in Glory, a wooden panel painting in the Uffizi gallery, Florence, and St. Francis Receiving the Stigmata, now in the Louvre Museum, Paris. Widely regarded as the founder of modern painting, he was influenced by his master Cimabue and, in his turn, influenced Masaccio and Michelangelo. As we shall see (1334 E3), he was also an accomplished architect, and was the original designer of the famous Florence bell tower that bears his name.

xxxxxThe painter Giotto di Bondone, born near Florence, probably served his apprenticeship in that city - possibly as a pupil of Cimabue - before being commissioned to work in a number of places, including Rome, Padua, Rimini and Naples. By the time of his death in January 1337, his contribution to the development of art was already recognized, but it was not until one hundred years later that the following words were inscribed on his tomb in Florence cathedral: I am the man by whose undertaking the art of painting was restored to life. 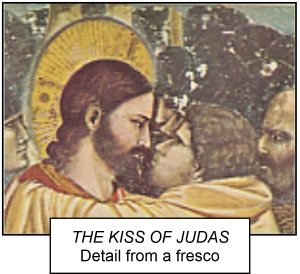 xxxxxGiotto was the most influential Italian painter of the fourteenth century, his reputation resting mainly on the fact that, in the depiction of religious subjects, his work broke away from the stylized, two-dimensional figures so typical of Gothic and Byzantine art. He was one of the first artists to give his figures lifelike, rounded forms and to portray the faces of his subjects with sensitivity and emotion. He used more subdued tones, rejecting the bright colours and golden backgrounds of the Byzantine style, but his settings were somewhat restricted, lacking the full perspective which was to be a refreshing feature of Renaissance art.

xxxxxWhat his work clearly shows is an emphasis on the human instead of the divine, and a desire to portray nature rather than a symbolized version of it. For the first time biblical scenes came alive, in tune with nature. Flat, lifeless and impersonal figures give way to human forms and dramatic interpretation. As such, his work is a milestone in the history of Western art. It is hardly surprising that he is widely regarded as the founder of modern painting. 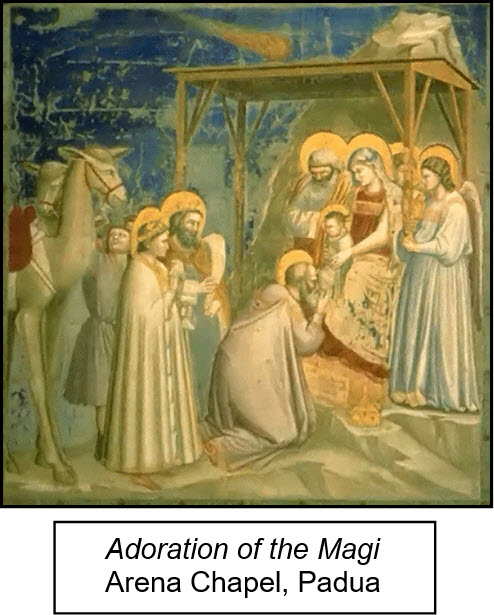 xxxxxHis output, in keeping with the times, was confined to altarpieces and church frescoes. Some of his paintings have not survived, and those that have managed to do so are in a poor condition or have had to be restored. One of his earliest works is a large series of frescoes, 38 scenes in all, in the Arena (or Scrovegni) Chapel in Padua. Completed in about 1307, they illustrate the Last Judgement and the lives, amongst others, of Christ and the Virgin Mary. And it was about this time that he started work on his Ognissanti Madonna (The Madonna in Glory), the only wooden panel painting that can be attributed to him with confidence. Now to be seen in the Uffizi Gallery in Florence, it shows the influence of Giovanni Cimabue, but the tenderness shown in the faces of the Virgin and child is due to Giotto’s skill alone. A later work is a series of frescoes in the church of Santa Croce in Florence which depict the lives of St. Francis, St. John the Baptist, and St. John the Evangelist. Unfortunately these had to be extensively restored. His St. Francis Receiving the Stigmata, originally painted for this church, is now in the Louvre Museum in Paris.

xxxxxGiotto spent some time in Rome and three works there are attributed to him. The best known are the Navicella, a mosaic of Christ Walking on the Water, over the entrance to St. Peter’s Basilica (illustrated below), and an altarpiece that was painted for Cardinal Stefaneschi, now in the Vatican Museum. However, the mosaic was almost completely restored in the seventeenth century, and the relatively poor quality of the altarpiece casts doubt on it being by Giotto’s hand. It is certainly known that he painted frescoes in the choir of the old St. Peter’s church, but, unfortunately, they have since been lost. 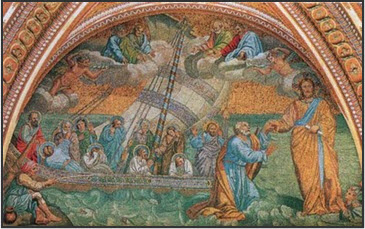 xxxxxHe was for many years credited with the set of frescoes in the upper church of St. Francesco in Assisi depicting the life and legends of the Saint. They show a marked similarity to his style and they were painted within his lifetime, but it is now believed that they were the work of other artists.

xxxxxAs we shall see (1334 E3), as an architect, only one example of his work survives, namely the west side of the bell tower of Florence Cathedral, begun towards the end of his life. Unfortunately, the campanile was never completed in his lifetime, and the design was later altered, so it is difficult if not impossible to appreciate fully his skill in this field.

Shown here are Madonna with Child, The Mourning of Christ, and The Last Judgment.

xxxxxApart from Cimabue, it is clear that Giotto was influenced by Pietro Cavallini (c1250-c1330) painting in Rome at this time, and also by the works of the Pisano, father and son sculptors Nicola (c1220-c1284) and Giovanni (c1250-c1315). He, in his turn, is able to include the brilliant Italian Renaissance painters, Masaccio and Michelangelo among his true successors. That alone is sufficient to earn him a place among the world’s greatest painters.

xxxxxIncidentally, the Italian poets Petrarch, Boccaccio and Dante all paid tribute to Giotto’s genius. In his masterpiece, The Divine Comedy, Dante places Cimabue (meaning “bullheaded”) among the proud in Purgatory, and uses him to illustrate the transience of earthly fame. He writes:

Cimabue thought to hold the field in painting,

but now Giotto has a cry, so the fame of Cimabue is obscured.