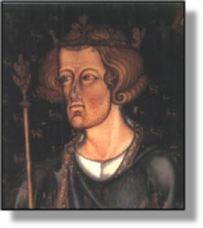 xxxxxAs we have seen, the son of Henry III, Edward, had already seen active service before coming to the throne. At one time he had supported the leader of the barons, Simon de Montfort, against the king, but he later fought alongside his father. He was captured at the Battle of Lewes, but escaped and led the royal forces against Montfort, defeating and killing him at the Battle of Evesham in 1265.

xxxxxHe was on a crusade when he succeeded to the throne. He had intended to join Louis IX of France on his ill-fated expedition to Tunisia, but he was not ready in time. Instead, he took his forces off to the Holy Land, where, it must be said, his army achieved but little. It was while on his return journey that he heard of his father’s death. He travelled home via France. En route, as Duke of Aquitaine, he paid homage to the French king, Philip IV, and then went on to quell some unrest in Gascony. In fact, he did not arrive back in England until the summer of 1274.

xxxxxEdward looked every inch a king. He was handsome and tall - hence his nickname “Longshanks” - and had a regal presence that commanded respect. In matters of state he believed in strong, efficient government, and, unlike his father, he took advice from proven administrators, like Robert Burnell, his able chancellor. A born leader and an accomplished soldier, Edward was determined to bring both Wales and Scotland firmly into his realm. He could be intolerant and arrogant, and he possessed the Angevin temper, but these traits did not prove a serious handicap until the closing years of his reign. Then, faced with a revolt of his barons and clergy, the loss of Gascony, and renewed rebellion in Scotland, he began to lose that firm grip on the country that had characterised his leadership for some twenty years.

xxxxxDuring his reign he established English rule over Wales (1282-84) by defeating the first Prince of Wales, Llywelyn ap Gruffudd. This was Edward’s greatest achievement. He was not so successful in his aim to conquer Scotland. Here he gained formal recognition as the overlord of the Scots, but he failed to achieve outright conquest - mainly due to King Baliol’s betrayal and the fierce resistance of William Wallace and Robert Bruce. It was certainly not for the want of trying; his many campaigns in Scotland earned him the title of “Hammer of the Scots”. Indeed he was on his way to fight the Scots yet again when he fell ill and died.

xxxxxAt home he proved an able and shrewd administrator. For financial support he leaned not on the barons but on the new, moneyed middle class which was emerging. Furthermore he made use of parliament to extend his authority and bring about reform. His Model Parliament of 1295 bore some resemblance to the parliament of today. But at this early stage, its importance lay not in its function so much as in its acceptance as a possible ingredient of government.

xxxxxAnd he also greatly extended the authority of the Crown, not only in the matter of law enforcement, but also by reducing the privileges of his barons - often falsely claimed -, and by stamping down on corruption amongst court and local officials. These ills, and many others, were dealt with by a number of Statutes, including two of Westminster, one of Gloucester, one known as Quo Warranto, and another as Quia Emptores - this last one providing measures to simplify and make fairer the outdated feudal system of land tenure. Traders and merchants also benefited from the Statute of Acton Burnell and the Statute of Merchants.

xxxxxAs already noted, by about 1294 things started to go sour for Edward. Firstly, he ran foul of his barons, mainly over his attempts to squeeze more money out of them to pay for his costly wars. The quarrel had dire consequences. In 1294 the French king, Philip IV, having constantly nibbled away at the borders of the English territory of Gascony, went the whole hog and took over the Duchy of Guyenne. It took some time for Edward to muster an army, and when he did so his expedition to Flanders proved a disaster. The barons who accompanied him refused to continue their support without a promise of reduced taxation. Then a serious rebellion broke out in Scotland, led by William Wallace (illustrated), and Edward was obliged to return home to defeat the insurgents. Guyenne - or most of it - was eventually restored to the English, but by negotiation not force of arms.

xxxxxSecondly, he quarrelled violently with his Archbishops of Canterbury, John Peckham and then Robert Winchelsy. The major cause was again over money, centred around the king’s right to tax the clergy, but there were also disputes over the privileges enjoyed by Church members, particularly where the law was concerned. Edward had earlier upset the clergy by his Statute of Mortmain (1278), aimed at preventing property falling into the hands of the Church and thus being lost to the Crown for ever. Then in 1297 Winchelsy called on the support of Pope Boniface VIII, whose bull Clericis Laicos, issued the previous year, excused clergy from the payment of taxes. Edward’s first and angry response was to outlaw his clergy, but after negotiation the matter was partially resolved, the Pope accepting that the clergy could be taxed for “national defence”.

xxxxxThus it was a weary Edward I who in 1307, hearing that Robert Bruce had turned up in Ayrshire and was once more mustering support for the cause of independence, set off for Scotland yet again. This time he never reached that troublesome land. He was taken ill on the journey and died near Carlisle, aged sixty-eight. Thus ended an eventful and crucial reign of thirty-five years.

Edward married Eleanor of Castile in 1254, and she accompanied him on his crusade from 1270 to 1273. A devoted wife, when she died in 1290, Edward erected the famous Eleanor Crosses at each spot where her coffin rested on its way to Westminster Abbey. Some of the twelve still stand. The one at Charing Cross (illustrated) was destroyed in 1647 during the Civil War, but was replaced in 1863, and today stands at the entrance to Charing Cross station. ……

xxxxx…… Legend has it that Edward asked that when he died his heart should be taken to the Holy Land, and that his bones should be carried on future military campaigns against Scotland. In fact he was buried in a black marble tomb in Westminster Abbey, and this was later inscribed with the words (in Latin) Here is Edward I, Hammer of the Scots. Keep Troth. In January 1774 the Society of Antiquaries opened his coffin and found that his body had been perfectly preserved for 467 years. His height measured 6ft 2ins.