xxxxxJohn XXII, the second of the Avignonese popes, was the man who really established the papal court at its new location in France. He also made a determined stand in upholding the rights of the papacy in political matters. In 1322, for example, he doggedly refused to accept Louis IV of Bavaria as king of Germany, and excommunicated him two years later. In addition, from 1318 he played a prominent part in the missionary field. Under his guidance, missionaries were sent far beyond Europe. The Dominicans were assigned to Greater Armenia, Persia and India, whilst the Franciscans were sent out to northern Asia, including China. Their mission stations contributed much to the advancement of the local community. And John played a major part in preventing a rift in the Franciscan Order, resolving the matter by 1325. 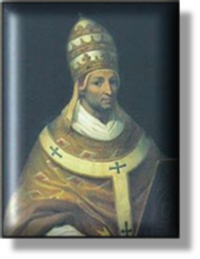 xxxxxJohn XXII is not one of the best-known Popes, but his pontificate was important for a number of reasons. The second of the Avignonese popes, following on from Clement V, it was he who really established the papal court on a permanent basis at its new location in France. And he also made a more determined stand than his predecessor in upholding the rights of the papacy in political matters. In 1322, for example, when Louis IV of Bavaria defeated Frederick III, Duke of Austria, in a struggle for the German crown, John refused to recognise his election, and then excommunicated him two years later. This dispute, which continued into the next reign (E3), proved to be one of the last of the major conflicts between medieval church and state.

xxxxxHe is probably best remembered, however, for the very strong impetus he gave to the Church in the missionary field. In 1318 he looked beyond Europe, assigning areas in the Middle and Far East to specific Orders in order to avoid conflict. Greater Armenia, Persia and India were to be the missionary ground for the Dominicans, whilst the Franciscans were to concentrate their efforts in northern Asia, including China. During his period of office he established bishoprics in Armenia, Anatolia, India and Iran. At first, these mission stations were modest in number and not always successful, but, where they were tolerated, they made more headway as trade increased and European settlements and colonies were established.

xxxxxEven before the death of St. Francis in 1226, his order, the Franciscans, founded in 1210 (JO), was in dispute over the vow of complete poverty. With the death of their great leader Bonaventure in 1274, trouble flared up between the Spirituals, those who observed the original rules, and the Conventuals who followed a less strict way of life. Pope John came down in favour of the Conventuals - claiming that Christ and his apostles had owned property - and the matter was virtually resolved by 1325. 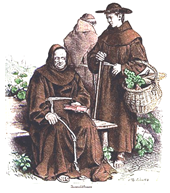 xxxxxAt this time, the Franciscans, founded in 1210 (JO), were making a valuable contribution to the Christian cause, but their movement was not without its problems. Even before the death of St. Francis in 1226, a dispute had developed over the vow of complete poverty. The order’s rapid expansion saw the establishment of monastic houses and these, by their very nature, were unable to follow the strict laws relating to this vow. Two factions soon arose, therefore, one following the strict observance of the original rule of poverty, and another in which communal possessions were permitted.

xxxxxWith the death of their great leader Bonaventure in 1274, serious trouble flared up between these two factions, by then known as the Spirituals, the hard-liners, and the Conventuals, who took a more relaxed view of their obligations. Pope John intervened in the dispute and came down in favour of the Conventuals, even threatening to persecute any Spirituals who openly opposed his ruling. And he followed this us up with two decretals (papal letters) claiming spiritual evidence to show that both Christ and his apostles had owned property. By 1325 the matter had virtually been resolved.

xxxxxBut Pope John’s dispute with King Louis IV of Bavaria was not so easily settled. The king, having won his battle with Frederick of Austria for the German crown, objected to Pope John’s interference in the matter. He denied papal authority in secular affairs, and came down in favour of the Franciscan Spirituals. As we shall see, this conflict between Louis IV and the Pope continued into the next reign and eventually led to the Declaration of Rhens in 1338 (E3).

xxxxxThe Italian philosopher Marsilius of Padua (c1280-c1343) gave strong support to Louis IV in his struggle with the papacy. Today, he is best remembered for his The Defender of the Peace (1322), a work in advance of its time in which he argued that the power of the Church should be limited, and that the people should have the right to choose their own ruler. In addition, the Church should be subordinate to the secular authority and governed by a council containing lay as well as clerical members.

xxxxxIn this dispute between Pope and Emperor, the Italian philosopher Marsilius of Padua (c1280-c1343) played a large part. Firmly in the emperor’s camp, he joined in with him in declaring the pope a heretic and in electing the anti-pope Nicholas V in his place. But he is mostly remembered for his remarkable treatise entitled The Defender of the Peace, written about 1322 with the assistance of the French interpreter John of Jandun. In this treatise, a work well in advance of its time, he boldly stated that the unity of the state must be maintained by limiting the power of the Church and by giving political power to the people, who alone had the right to choose their ruler. Furthermore, not only should the Church be subordinate to the secular power, but it should be governed by a general council containing lay members as well as clergy.

xxxxxIt is hardly surprising that, because of this work, both he and John of Jandun were condemned as heretics by Pope John and were obliged to flee for their lives, Marsilius spending the rest of his life at the court of the Emperor Louis in Munich. Nor is it surprising that this treatise should be seen as one of 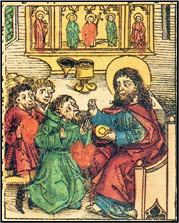 the most original pieces of political thinking for its age. Indeed, many scholars have come to regard it as precursor of both the Protestant Reformation and modern democracy.

xxxxxIncidentally, some sources claim that Pope John sent out eight missionaries to Ethiopia in about 1314 to seek out Prester John (Presbyter John), a legendary Christian prince (illustrated), who - first mentioned from around the mid-12th century - was believed to rule over a powerful empire in that region of north-east Africa. Needless to say, they never found him. In 1910 Prester John was the subject of a famous adventure story by the Scottish writer John Buchan.