xxxxxAs we have seen (1113 H1), it was in 1119 that the order of the Knights Templar was founded in Jerusalem to protect the roads used by the pilgrims to the Holy City. Bernard of Clairvaux drew up their rules of obedience, poverty and chastity. Over the years the order became both powerful and wealthy, and even more so when Palestine had been re-conquered by the Turks, and the organisation, then numbering some 20,000, turned its hand to banking. In 1307 they were accused of immorality and heresy, and in 1312 the pope at Avignon, Clement V, closed down the order. Some of its leaders were killed or tortured, and their huge funds were dispersed, much of it to their rival order the Knights Hospitaller. The actual extent of the Order’s guilt is not known. Some of the charges against them may well have been fabricated. 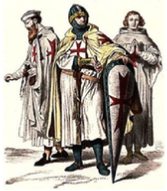 xxxxxAs we have seen (1113 H1), the duty of the Knights Templar, a religious and military Order created in 1119 after the successful conclusion of the First Crusade, was to protect the road that ran from Jerusalem to the coast so that pilgrims could travel in safety. Their headquarters, given to them by King Baldwin II, were situated on the site of the temple of Solomon, and this is how they derived their name. The order was founded by two French monks, Hugh of Payens and Geoffrey of St. Omer (both former knights), and it was Bernard of Clairvaux who drew up the order’s strict rules based on obedience, poverty and chastity.

xxxxxThe Templars were governed under a grand master and general council, and were directly and only responsible to the pope. Wearing a white cloak with a red cross they developed into a powerful and wealthy Order, their riches coming mainly from the gifts of kings and nobles. Thus endowed, the Order played a prominent role in future Crusades, but their success and the wealth that went with it was to prove their downfall.

xxxxxIndeed, so wealthy and powerful did they become, despite their commitment to poverty, that in 1291, when Palestine had been finally re-conquered by the Turks, the Order’s major activity became banking, whereby they amassed an even greater fortune by money-lending. By this time the Order could boast of 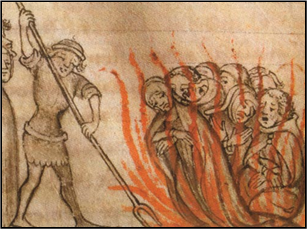 some 20,000 knights. Their success aroused much resentment among both State and Church leaders, and in 1307 Philip IV of France accused the Templars of heresy and immorality. Five years later, in 1312, the Pope at Avignon, Clement V, issued a bull closing down the Order on the grounds of malpractice. Some leaders were burnt at the stake (illustrated), others were tortured to obtain confessions, and the funds accumulated by the Order were dispersed, some to secular leaders and a substantial amount to their rival Order, the Knights Hospitaller.

xxxxxThe extent of the Templars’ guilt is not easy to assess. Perhaps the charges against them were fabricated in part if not in total. What is not in dispute is the importance of their military contribution to the defence of the Holy Land in the early days of the Crusades.

Knights: date and artist unknown. Burning at Stake: artist unknown, from an anonymous chronicle entitled From the Creation of the World until 1384 – Municipal Library, Besançon, Eastern France.